Grant Calcaterra has had a very up and down college career, and he may be in store for one in the NFL with the wrong landing spot as well. 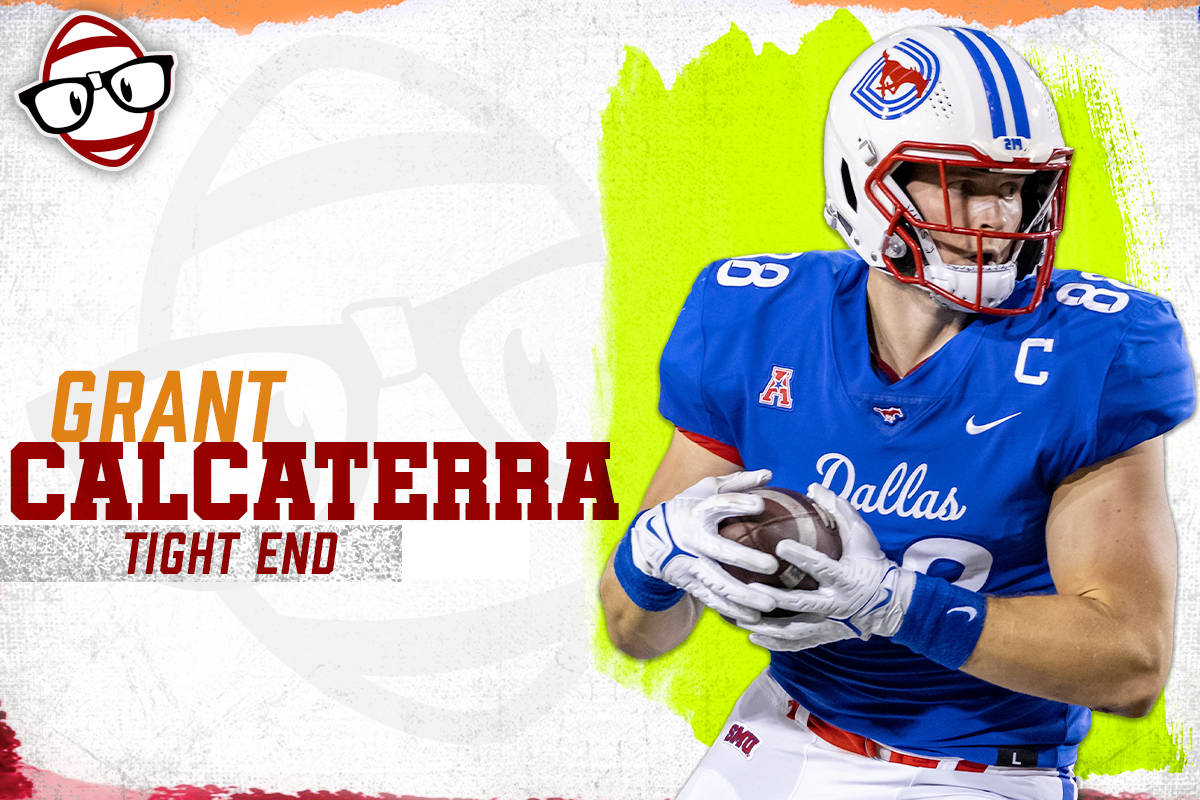 What was once seen as a promising college into a pro career, Grant Calcaterra saw his football career get derailed. However, after some time away from the sport, he has found his way back on the tracks and is ready for his long-awaited NFL jump.

Calcaterra had to retire for a bit after leaving Oklahoma. This past year in SMU, he proved he hasn’t missed a beat. All of this past season at SMU, he flashed the old version of himself that many saw as a TE prospect. Now, after a draft process that saw him start in Mobile at the Senior Bowl and now a month out from the draft, it’s worth knowing what we should expect from him.

The latest installment of our continued rookie profile series continues.

Calcaterra was a four-star recruit, sixth-ranked tight end nationally, based out of California. He had offers from 19 schools, according to 247, with some of the highlights being Colorado, Florida, and Oregon, but he ended up going to Oklahoma. Oklahoma is an offensive juggernaut and had produced several NFL tight ends under the Bob Stoops regime. Committing there made the most sense for his pro dreams, and he wasted no time getting those kick-started.

Calcaterra spent his freshman year behind future Pro Bowler Mark Andrews. He saw work in five games with little work from a passing game perspective. However, in his sophomore and junior seasons, he saw much more work in the passing game. He played the entire season in 2018, seeing his best season at Oklahoma. Sadly in 2019, however, the concussions started playing a significant part in his decline and eventual retirement from football.

After taking a year and a half away from the game, he announced that he was ready to come back on social media. Along with announcing his comeback, he also announced he would be transferring, and he would land at SMU, and it’s a fun offense led by Tanner Mordecai. Calcaterra had career highs in receptions and yards and found the endzone four times. He was voted to be second-team All-AAC for all the stats he accumulated and the work he put on film.

For his size of 6’4” and 240 pounds, he can prove to be pretty elusive as a ball carrier and in his route running. As a ball carrier, he has decent decision-making, which allows him to avoid contact or defenders more often than not. When he can, he can make a move one-on-one.

Footwork and hand usage make this elusiveness a weapon in his game. Whatever the situation calls for, he has a tool in the shed to make it work and extend a play or score a touchdown. There are concerns with his game in other areas, but all an offense needs to do is get the ball in his hands the way SMU did this past season and let him create from there.

John Madden would always talk about a tight end who was a threat in the red zone, and that is exactly what Calcaterra is. His size and the way he uses his body against blocked defenders can make him a quarterback’s best friend. Tanner Mordecai was not the most accurate passer this past year, but when he needed to throw up a 50/50 ball to Calcaterra, he came down with it more often than not.

His ability to be an asset in the red zone makes him someone a quarterback could trust, and that in itself cannot be measured or evaluated on any level.

Calcaterra has a pretty complete skill set, but his medical history is a giant red flag. While that isn’t an area to improve upon, it is an area that is worth being concerned about. One bad hit in the NFL could end his career; despite his year and a half off of football, we have seen and know the brain is a fragile organ. You see it at times in one film, too; he shy’s away or avoids contact entirely. It’s not something he will be able to do in the bigger and faster NFL.

I think Calcaterra could be a spot start option for an NFL and fantasy roster in the right situation. That being said, I don’t expect him to be drafted anywhere where he is expected to have meaningful reps anytime soon. TEs take some time to adapt to the NFL landscape, and time is something we don’t know how much he has left of.

Could he earn meaningful reps in a rotational role as he develops? Absolutely. Does that make him someone you should monitor but from a distance and not on your roster? Probably, if we are being honest with ourselves.

Great skillset, just too many health and longevity questions, sadly.