Defense stole the show again on Day 2! This is proof of the new era the NFL is in with high octane scoring offenses that need to be simmered down. What a great time to be knee deep in IDP! 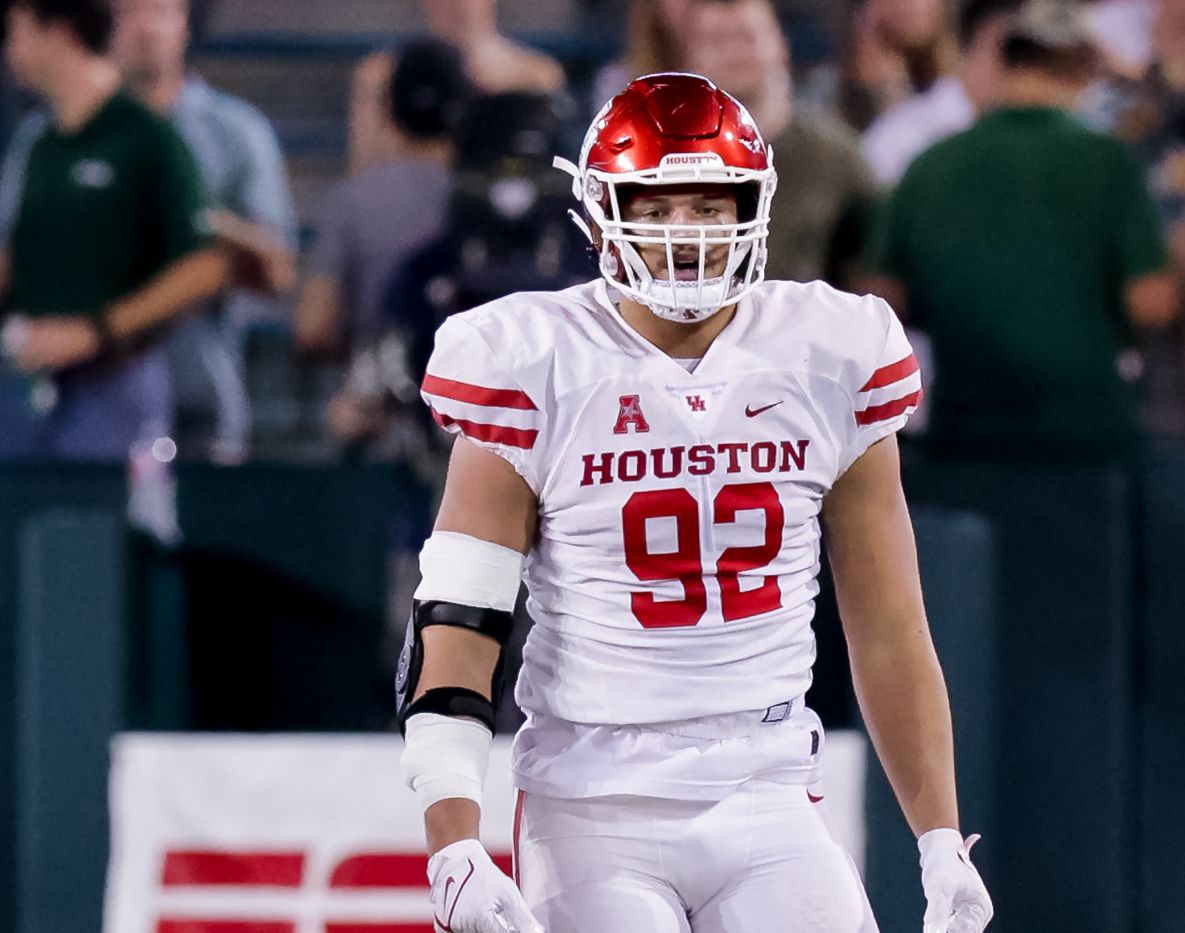 You IDP addicts, we have what you need right here to get the best breakdown and landing spots in dynasty! We start the night as we did on day one, with defense! A staggering 38 defensive players were taken in rounds two and three! Multiple trades occurred throughout the night. Last night, we never had a dull moment; thank you, NFL War Rooms!

With Tampa being a bit older upfront, this move made the most sense, grabbing an impressive pash rusher using finesse and power when called upon wherever they line him up. Logan has a high motor and is a relentless pass rusher. He is a raw talent that will become better with NFL coaches.

First Team, All American McCreary has first round talent who fell simply because of his short arms. That never stopped him in the SEC, though. He can change direction quickly with the recovery speed being there. He is a dawg on the line and will fit into the Tennessee man coverage nicely.

The 2021 Consensus All-American Jalen Pitre has extreme playmaking skills that he displayed with free rein of the secondary. Quick first step. Solid Blitzer. He is not super fast, but his instincts make up for that. If he can be used the same way in Houston as at Baylor.

The size of Ebiketie is the only reason he fell into the second round. He has the first round attributes. It has the quickness, pash rush to bend the edge, and the speed and power to make it all come together.

2021 1st Team All-Pac 12 Kyler Gordon doesn’t have the speed that could have put him in the first round. His ability to stop the run is his best attribute. Chicago needs talent all over the roster; this seals up some of the run defense on the outside.

The pick fills a much-needed role for the Seahawks on the edge, where he got better each year at Minnesota. Very explosive, solid hand placement, and the bend. Step in immediately on the front seven and contribute.

Du to injury during the pre-draft process, this 1st round talent fell into the second for the Vikings. Swift feet, rotational hips, and plays Man/Zone both well. Learning from Patrick Peterson for a year could make this kid unbelievably good.

Suffering a torn Achilles at his pro day is the only reason he fell to the second round reminded me of Jaylon Smith and Myles Jack. Ojabo has incredible upside, and a year of getting stronger could make him a monster flying to the ball.

Paschal is going to be a third down pass rusher. It doesn’t stop the run effectively as you would like. He plays very low, which hurts him as he is on the ground more than he should be. The Lions doubled up on the pass rush, which addresses another need.

Washington has been a defensive line drafting team for some time now. Many experts were surprised by this pick due to the other needs on the roster. Mathis is complete DT in the trenches. Quickness, two-gap ability, and can rush the passer. He will push the pocket.

Chicago goes secondary again in the second round. Brisker reminds me of Ed Reed in the way he plays. Length, Hard-hitting, and explosive. Exceptionally high football IQ with the size and speed. An excellent pick for the Bears, reinforcing the secondary with Aaron Rodgers returning to the division.

The Saints grabbed a versatile safety who is explosive at the point of attack delivering hard hits. He is best in a zone with his change of direction a bit slow. A dynamite special teamer at Tennesee. Expect to see him contribute there before making the transition to a starter.

Big-time bull rush with heavy hands. Hands need to be moving more. Quick first step but don’t use his length the way you would like. Cowboys filled a need they could have had on day three.

Former QB. High octane producer at the FCS level. He moves fast for his size. Ball seeker engine with a 747 tackling radius. He needs to adjust to the speed in coverage for the NFL. Falcons had to replace Foye Oluokun due to Free Agency.

This pick is the war room pick. Cincinnati decided to bolster the secondary as they needed it with a sleeper they all coveted. Lively, volatile, snappy. Excellent recovery skills. Strong ball instincts. Cam is just a good sound player.

Sleeper, late in the second, was grabbed by the 49ers. Drake will develop a better pass rush with the help of Nick Bosa. The strength that he needs will come from NFL coaches. He has a real chance to develop into a quality pass rusher.

This pick is a bit early. Not crazy athletic. He relies on a high football IQ to make plays on a sound defense, which boosted his draft stock. I’m not in love with this pick; if he makes it on the field, he may contribute over the top when opponents need to score fast due to Patrick Mahomes.

Not a massive edge rusher. He plays chess when setting up pass rushes. Explosive. He bends the edge with speed. It should be set up nicely for Denver on the front seven.

Takes on blocks excellent. Speed, High-Energy side to sideline ability. Coverage skills need work, but his speed shouldn’t take long to develop that trait. He will have a chance to start and should play a significant special team role in his rookie season.

One of the taller prospects with long arms. He plays man better than zone. He tends to miss tackles. Not sure what the Browns want from him other than special teams.

MUUUMA! I love this pick by the Jaguars. He can play anywhere on the second level. It could be an in-the-box safety (SCARY) that excels with that front line of Jacksonville. Locked in tackler, athletic, superb speed for the position. It will be challenging to keep off the field in the fall for the Jaguars.

The saying speed kills an opposite meaning for Harris. His speed often takes him out of the play, and Harris misses too many tackles for my liking. A fantastic athlete, without a doubt. Once he learns to control and react no telling what his ceiling will be.

Has the frame to be menacing. Inconsistent play is why he is in the third round. If he can learn and put it on the field, he can be a stud with Myles Garrett.

Playing next to Derwin James will bode well for Woods at the free safety position. Playmaker, speedy, will need to work on his tackling.

The Giants found a nickel corner in Flott. Nimble, tall, nose for the ball. Catching everything. He should slide into the starting role and be like an All-Pro Kenny Moore has for the Colts.

An excellent pick for the Falcons as they needed more pass rush. He slid in the draft because of his power/ weight. Productive, high motor, bends the edge. One to watch.

Best pick in the third round. Dean could have been a first-round selection if he hadn’t put off surgery. The Eagles already had a good draft. This value pick added only cements them as the best teams in the draft. Dean will come in and immediately start. Please don’t sleep on him.

Steelers wanted the defensive line room younger. Good player. I can’t see much of IDP fantasy impact as of now.

Patriots went for a returner with this pick more than his corner abilities. I can play the slot when needed though just a bit undersized.

Lost Chandler Jones had to fill the need. Can rush from anywhere. High Motor. Wait and see how he develops.

The Bills needed more depth in the LB room. He will play special teams for the most part. I could see him on third downs blitzing as he excelled in that department.

Colts didn’t need to go secondary. Cross is someone who can come in and bring healthy competition. Fast heat-seeking tackler with major explosiveness. The Colt’s secondary was banged up most of the season. Worth a stash.

Kerby has hips that turn and go. Natural runner. Long armed covers the top of the defense. One to watch.

Cardinals making another DL selection is brilliant. When he puts on weight added with his pass rush skills, this could be the steal of day two. Watch in training camp.

Speedster for the Bulldogs. Fundamentally raw talent. Can become a starter down the road.

Cheifs have a young linebacker core. Not sure I can see him on the field outside of special teams. Injuries did plague the Chiefs at this position this past season. He does have the talent given enough reps.

Round One IDP Impact
Tyreek, Deebo, and Davante: Why the WR market is so Volatile and What it Means for Dynasty
Black Friday Sale