Should you bench Deebo with Brock Purdy under center? @THEtristancook is here with Slant Pattern – Week 14 to help with your WR start/sit decisions! 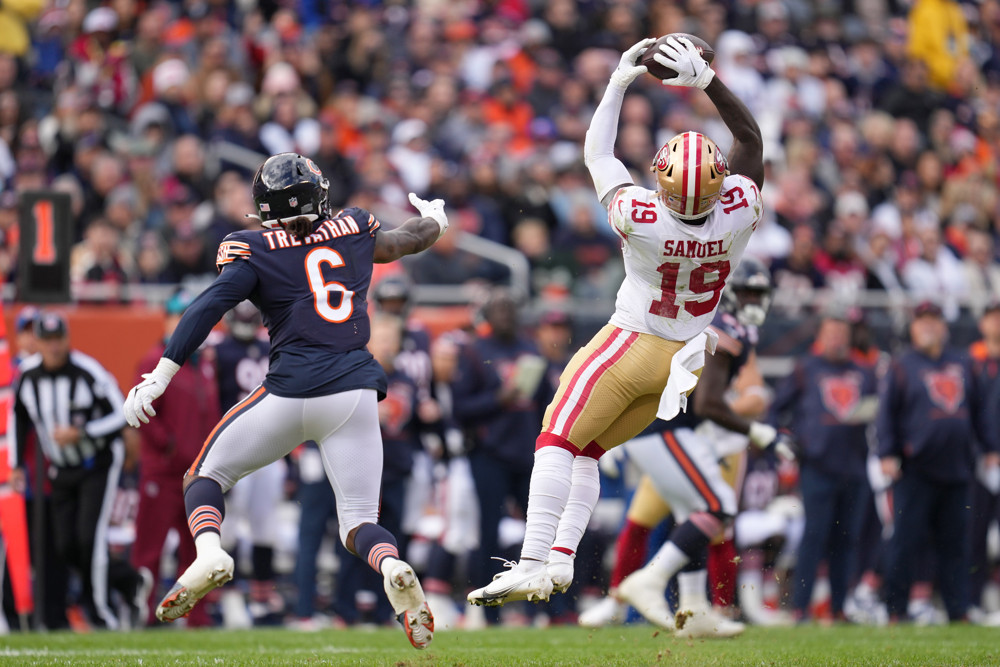 Hello and welcome back, Nerds! The Dynasty Nerds writers are here to provide you with weekly starts and sits. I will be doing the WR starts and sits for the 2022 season! We, as a group, will be making our recommendations based on weekly consensus PPR rankings from FantasyPros. Here is our squad and the position groups they will be covering to help you each week. Follow, DM, and Tweet us.

One thing to keep in mind when making your start/sit decisions, it will ALWAYS depend on who your other options are. The players listed below are wide receivers that I expect to finish above/below their respective rankings. But it doesn’t mean you need to take them out of (or put them into) your lineup unless your alternatives are worth it.

Last week was a qualified success for my calls. I had three ‘hits,’ two ‘misses,’ and one player who was injured early in his game. My best calls were to ‘sit’ Mike Evans and Michael Pittman Jr. My worst call had Adam Thielen as a ‘start.’ The player that was injured was Courtland Sutton. He exited the game after only one target. It’s hard to say how his week would have gone. My other two calls were to ‘start’ Darius Slayton and to ‘sit’ DeVonta Smith. Slayton was a good call, whereas Devonta was a ‘miss.’ Time to do better this week.

Deebo Samuel is my first ‘start’ for Week 14. He usually would be a no-brainer ‘start,’ but given the quarterback situation in San Francisco, it may be a question. I can’t say that I have a ton of confidence in Brock Purdy to outduel Tom Brady on Sunday, but I do have confidence in Kyle Shanahan getting the ball in the hands of one of the most dynamic offensive weapons in the NFL.

Deebo was heavily targeted last week and will likely be the focal point of this offense again this week. Even with the downgrade at the quarterback position and facing an above-average pass defense, I am confident in him. He may not have an incredible ceiling this week, but he should be a safe play and one that I’m confident in playing.

Next, I have Tyler Boyd as a ‘start’ this week. Boyd is another player I think is a “safe” option in Week 14. I don’t know that he has a massive ceiling on any given week when both Chase and Higgins are healthy. However, Tyler Boyd is a good bet to at least return solid value for his ranking. He has averaged 5 catches for 47.7 yards and 0.45 touchdowns per game against Cleveland. This secondary, and defense as a whole, of the Browns has been below-average in 2022, so I think he should have no problem eclipsing those averages. If you’re looking for a home run, Boyd may not be your best option. But if you’re looking for a guy that can help you move into the playoffs or the next round, Boyd is your guy.

Jerry Jeudy is my final ‘start’ for Week 14. I think we are all aware of the struggles that Denver has had offensively this year. But I expect the Broncos to have to throw the ball and throw it often against Kansas City on Sunday. If they have any chance of keeping it close with the Chiefs, they will need to score more points than they are averaging.

Kansas City is a bottom-10 pass defense, so Denver should be able to have some success through the air. With the uncertain status of Courtland Sutton, I expect the passing game to run more through Jerry Jeudy. Is there some risk with trusting a Denver Broncos player in a pivotal fantasy week? Yes. However, I think Jeudy should pay off well. I’m starting him where I have him.

Zay Jones is my first ‘sit’ for Week 14. This call will be someone contingent on the health of Trevor Lawrence. It looks like Lawrence will suit up for this one, so there is a little more hope. However, Jones was only able to haul in 2 of his 7 targets last week in a very favorable matchup against the Lions. So, despite facing an even weaker pass defense this week, I’m not too confident in starting Zay. Jones has only eclipsed the 10 fantasy-point mark in two of his last five games. I’ll be looking elsewhere this week for wide receiver production.

My next ‘sit’ is a familiar name to this list, Gabe Davis. At this point in the year, you may not have many better options than Davis, but I’m still looking elsewhere if I have feasible options. While we know that Josh Allen and the Bills’ offense is capable of scoring against anyone, the Jets allow the 6th fewest yards passing per game in the NFL. And Gabe Davis is anything but consistent.

He is coming off a game where he only caught 2 of his 7 targets for 15 yards. He scored on a broken play where Allen found him uncovered in the end zone. But he’s just too risky and inconsistent for me to trust. Davis only has five games with more than 40 yards receiving this year, with only one of those five eclipsing the 100-yard mark.

My third and final ‘sit’ is Brandon Aiyuk. The analysis here is fairly simple. I don’t trust that Brock Purdy nor Kyle Shanahan will be able to make multiple wide receivers fantasy relevant against a good Tampa defense. Tampa Bay allows under 200 yards through the air each week, and I would be surprised if Purdy eclipses that mark.

The only two San Francisco players I feel comfortable starting are Deebo Samuel and Christian McCaffrey. You may not have other options with BYE weeks and injuries, but I’d likely pick almost any fantasy-relevant player over Aiyuk this week.

That’s it for Week 14. Feel free to reach out to me on Twitter (@THEtristancook) if you have any specific questions about who I would start.