Is Mike Evans a league winner? @THEtristancook thinks so! Check out Slant Pattern – Week 15 to help with your WR start/sit decisions! 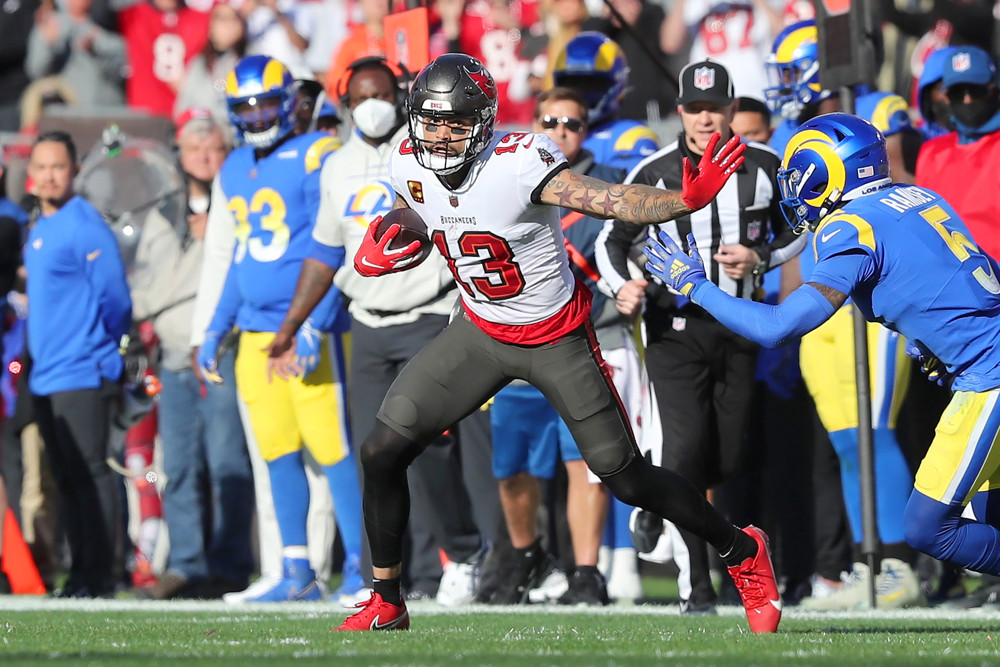 Hello and welcome back, Nerds! The Dynasty Nerds writers are here to provide you with weekly starts and sits. I will be doing the wide receiver starts and sits for the 2022 season! We, as a group, will be making our recommendations based on weekly consensus PPR rankings from FantasyPros. Here is our squad and the position groups they will be covering to help you each week. Follow, DM, and Tweet us.

Last week was a letdown for me. Two of my ‘starts’ got injured during their respective games. Deebo Samuel was on his way to a big week and would have likely been a good call. However, he still finished above his ranking. On the other hand, Tyler Boyd was injured very early and never returned to the game for Cincinnati. My best call was having Jerry Jeudy as a ‘start’. He had his best day of the season en route to being the WR1 on the week. I also had Gabe Davis as a ‘sit,’ which was a good call. He had another disappointing week. My worst call had Zay Jones as a ‘sit’. He finished as the WR8 of the week. Time to dive into the picks for this week.

I only have two ‘starts’ this week. Mike Evans is my first ‘start’ despite having struggled of late. In fact, Mike Evans hasn’t eclipsed the 100-yard receiving mark since Week 8 against Baltimore. Even worse, Evans hasn’t scored a touchdown since way back in Week 4. So, why am I suggesting him as a start?

Well, there are a few main reasons. First, Mike Evans has been heavily targeted by Tom Brady. The opportunities continue to be there for Evans. He also is facing a favorable matchup with Cincinnati. The Bengals are a below-average pass defense and can be exploited. Finally, Evans is due for some positive touchdown regression. In a week where we are dealing with injuries and many backup quarterbacks under center, I’m confidently rolling out Mike Evans.

My other ‘start’ this week is JuJu Smith-Schuster. He had a big game for Kansas City in Denver last week, and I expect another strong outing this week. The Chiefs lead the NFL in passing yardage, and the Texans’ secondary is below average. They also will be without their top corner Derek Stingley Jr. JuJu has been a little hot and cold this season but is trending in the right direction. This game presents Kansas City with a get-right opportunity against one of the worst teams in the NFL. Again, in a week with so much uncertainty, I trust Patrick Mahomes to get the ball to JuJu in a good matchup.

My ‘sit’ list is rather long this week. First up is Marquise ‘Hollywood’ Brown against the Denver Broncos. The analysis is pretty straightforward here. This is a difficult opponent, on the road, with the backup quarterback. Despite Denver’s defense falling off a little bit from where it has been, they are still a very tough matchup, allowing only 196.6 yards passing per game.

This game will be a battle of the backup quarterbacks, with Colt McCoy under center for Arizona and Brett Rypien calling plays for Denver. I am avoiding this game at all costs. DeAndre Hopkins and Jerry Jeudy are the only two receivers I’d be willing to play. Look elsewhere if you have the option.

Drake London is my next ‘sit’ for the week. He had one of his best games of the year against Pittsburgh in Week 13 before the BYE. London caught 6 passes for 95 yards on a season-high 12 targets. But, as you probably are well aware, the Falcons made a change at quarterback during their BYE. Rookie Desmond Ridder is getting the call for his first NFL start against Tennessee on the road. This call could certainly blow up in my face. But unless you have no other options, I’m looking to avoid relying on a rookie quarterback starting his first game on the road. The matchup should be favorable, but the Falcons will likely run the ball over and over. I can’t trust my playoff outcome on Drake London.

My final ‘sit’ is a player who has become one with the ‘sit’ section of this list. However, it is due to him continuously being ranked too highly. I will continue to bang on the “Gabe Davis isn’t a weekly starter” drum as long as it takes for people to hear it. In his last three games combined, Davis has 9 receptions for 84 yards and 1 score. He has seven games this season with fewer than 40 yards receiving.

The Dolphins are a below-average pass defense, so there will likely be some yardage to be had through the air. However, I expect most of that to go to Stefon Diggs. Davis always has the potential to catch a long pass or score on a broken play. But I’m not going to trust him in this crucial week in what looks like it will be a very cold game on Saturday night. I’m looking elsewhere once again.

That’s it for Week 15. Feel free to reach out to me on Twitter (@THEtristancook) if you have any specific questions about who I would start.