Will Gabe Davis repeat his 4 TD playoff performance from 2021? (spoiler: no) @THEtristancook is here with Slant Pattern to break down the best Week 6 WR options! 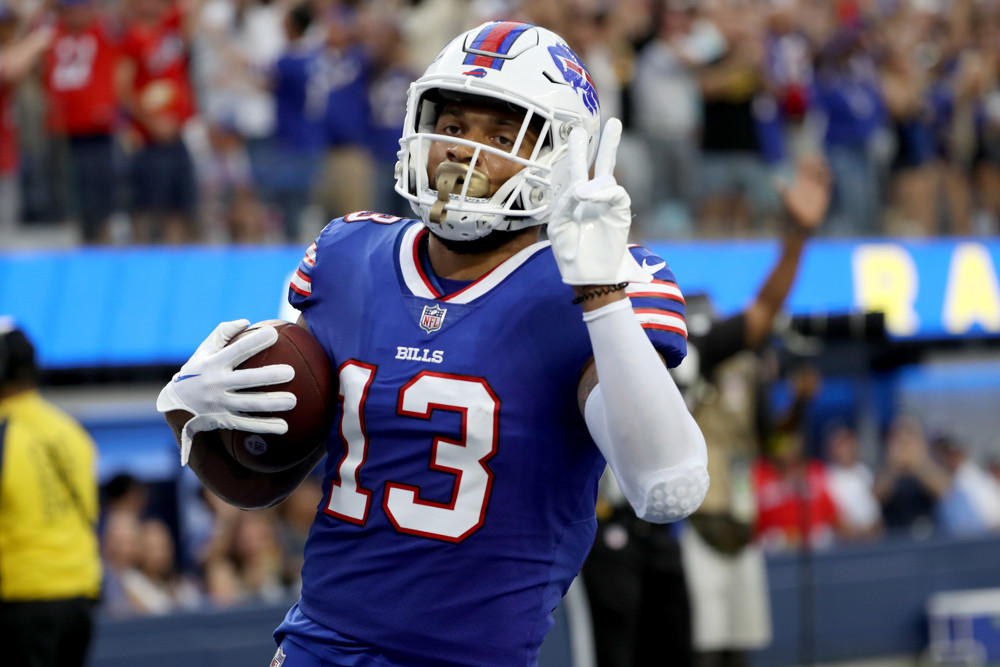 Hello and welcome back, Nerds! The Dynasty Nerds writers are here to provide you with weekly starts and sits. I will be doing the WR starts and sits for the 2022 season! We will make recommendations based on weekly consensus PPR rankings from FantasyPros. Here is our squad and the position groups they will be covering to help you each week. Follow us, DM us, tweet us, we look forward to hearing from you!

After a strong Week 4, last week was a step backward. My biggest misses were having both JuJu Smith-Schuster and Garrett Wilson as ‘starts’. Both finished outside the top 65 wide receivers. JuJu had plenty of targets but couldn’t capitalize enough, and Garrett Wilson didn’t do much in what turned out to be a blowout victory over the Dolphins. My two best calls were Allen Lazard and DeVonta Smith as ‘starts’. They finished well above their rankings, with Smith notching a WR1 week. Let’s get to this week’s calls.

First, I have Allen Lazard as a ‘start’ against the Jets. Lazard was ‘hit’ last week as a start and will remain on this list as long as he is ranked so low. The popular pick for Green Bay is Romeo Doubs, but all Allen Lazard has done this year is put up solid fantasy numbers. Green Bay is facing off against the Jets this week, who have played pretty good pass defense this season. However, I am not concerned about Lazard and Rodgers being able to connect on Sunday. I am starting Allen Lazard with confidence in Week 6.

My next ‘start’ for Week 6 is Jerry Jeudy. He’s been a little bit hot and cold so far in 2022, with two games under 5 fantasy points and two games with more than 15. I know it has been difficult to watch the Broncos offense, but I am optimistic that they will get things figured out. It also hasn’t helped that Russell Wilson has been dealing with a shoulder injury. So, why is Jeudy a ‘start’? Well, outside of the Week 2 game against Houston, he’s seeing a solid target share and has yet to convert that into consistent fantasy success. I think this is the week he gets it rolling.

Speaking of players seeing a good target share, my final ‘start’ for Week 6 is Drake London. His target share is 31.7%, which is a monstrous number. So, despite his underwhelming fantasy games over the past two weeks, I am still starting Drake London. The 49ers are one of the best pass defenses in the NFL, but when you have a player being fed the ball, it’s hard to turn away from him. I am rolling out London against San Francisco this week.

Mike Williams is my first ‘sit’ for Week 6. Part of having him as a ‘sit’ is the possibility of Keenan Allen returning to the field. However, it also is largely due to the matchup against the Broncos. Denver allows the fewest yards passing per game, and Patrick Surtain has been a huge reason for that.

I’d feel a little better about Mike Williams’ outlook this week if Keenan Allen is ruled out, but either way, I’m looking at other options if I have them. If Allen plays, we have to assume he’ll eat into Williams’ target share. Alternatively, if Allen sits, I expect to see Patrick Surtain on Williams all game, and I am not excited about that either. You may not have better options, but I don’t think Williams is getting close to his current WR13 ranking.

My next ‘sit’ is a familiar name if you’ve followed along with these articles this year. That’s right. I am looking to get Gabe Davis out of my lineup. I know it may be a difficult thing to do, especially after what he just did against the Steelers last week and with this week’s matchup against the Chiefs. In case you forgot, the last time he played KC, he scored four times against the Chiefs in the playoffs last year.

Anyway, the biggest reason for my pessimism about Davis is his unsustainably high touchdown rate. Davis only has 11 catches in 2022 but has scored three times. You can call me a Gabe Davis hater, but I’m not banking on that continuing, and if he doesn’t get in the end zone, he hasn’t been good. So count me out this week.

DJ Moore is my final ‘sit’ for Week 6. After the firing of Matt Rhule, I think there has been a lot of optimism for DJ Moore turning his season around. But I’m not so confident, at least not yet. This season, Moore has been a target hog but hasn’t turned that into fantasy success. The difference between DJ Moore and the aforementioned Jerry Jeudy is the quarterback situation. Jeudy has Russell Wilson throwing him the ball, whereas this week, DJ Moore has PJ Walker delivering passes. Additionally, the trade rumors surrounding Moore just add one more thing to a less-than-ideal situation. I’m looking at other options for Week 6.

That’s it for Week 6. Feel free to reach out to me on Twitter (@THEtristancook) if you have any specific questions about who I would start.

There are also weekly office hours in the Facebook group and on Twitter each Sunday morning before the early games kick off. There are a handful of writers that will answer all the questions posted, so you are usually able to get a few different takes on your situation. Make sure to come back next week to see how these picks turned out. Good luck!