Is this the week of the Alabama WRs? Should you bench Tyler Lockett? @tristancook_ is here with the WR start/sit calls for week 8! 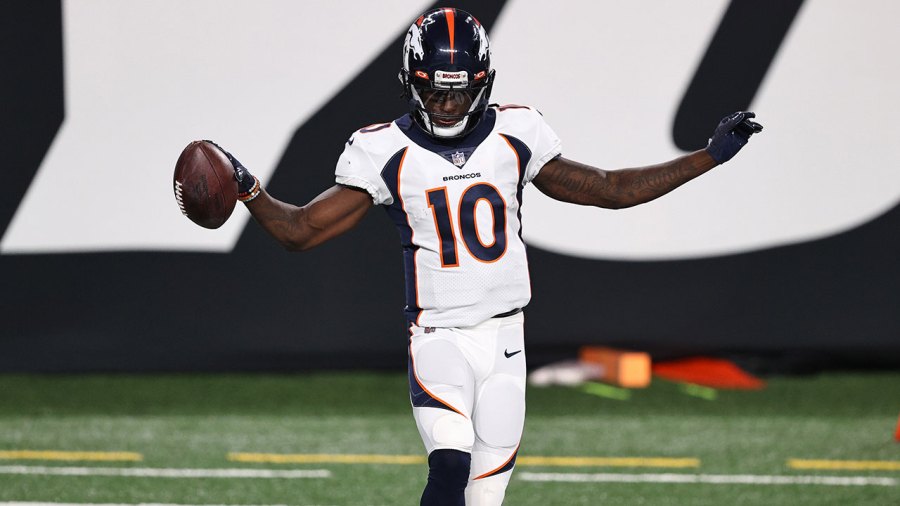 Well, simply put, week 7 was a rough one. My best three calls were AJ Brown (start), Julio Jones (sit), and Allen Robinson (sit). Additionally, Jaylen Waddle finished slightly above his ranking at WR18. DeVonta Smith (start) had an alright game, but not as good as I had expected. And finally, both Brandin Cooks (start) and Tyler Lockett (start) were major disappointments. Hopefully you were able to survive last week, and this week I’ve gotta do better. Let’s get to the calls.

First off, I’m back on the DeVonta Smith train. I know his performance last week didn’t result in the outcome I desired. But, I believe the process was right. I am vehemently in the “process over results” camp, so I am quite optimistic for this week. Smith was targeted 9 times in the Eagles’ loss to the Raiders, which is the third time in the last 4 weeks with at least 9 targets.

The main determinant in a player’s fantasy success is opportunity, and DeVonta clearly has the opportunity. But, that’s not the only thing working in his favor. The Eagles The matchup this week against the Lions isn’t one that should be scary. The Lions have given up the 4th most passing yards in the NFC, so there should be plenty of yards to be had for Smith. Additionally, the injury to Miles Sanders should mean the Eagles throw the ball even more. If you have DeVonta, start him, he’s due for a big game.

The next ‘start’ I have this week is Dolphins rookie, and former teammate of DeVonta Smith, Jaylen Waddle. I certainly didn’t expect him to be the type of WR that lives near the line of scrimmage, but that’s what he’s been so far. He has two games of double digit receptions, but didn’t get over 70 receiving yards in either game. In fact, his 7/83/0 game last week was his high water mark for receiving yards in a game.

The confidence that I have in Waddle this week, and really this year, is that the Dolphins are going to have to throw a lot. Their offensive line is terrible, so they are unable to run the ball, or protect long enough for Tua (or Watson potentially) to throw down the field. I expect to see the Dolphins throw, and throw, and throw some more. So, make sure you get Waddle in your lineup.

My next ‘start’ is another former Alabama WR, Jerry Jeudy. He is slated to make his return to the Denver lineup this week against Washington. There is certainly some inherent risk with starting a player in the first week back from an injury. But, I am confident in Jeudy. The reason for my confidence is pretty simple.

First, Washington is absolutely the worst pass defense in the NFL. They are the only team that is allowing over 300 passing yards per game. Teams are able to pick them apart through the air, and I expect Teddy Two-Gloves to continue that trend. When Jeudy was on the field, he was the preferred target for Bridgewater. It obviously is a very small sample size, but I am confident that Jeudy will have a good game.

Emmanuel Sanders is my final ‘start’ for week 8. He is having quite an impressive year, and at 34 years old, is outdueling father time. The Bills have a very high powered offense, and Sanders has been a big part of it. He has posted 13+ fantasy points in each of the last 4 games, including two 20+ point weeks. Buffalo doesn’t exactly have a great running attack, so it makes sense to see Josh Allen slinging the ball all over the field.

The Bills are coming off of their BYE week after the heartbreaking last second loss to Tennessee on a 4th down stop. Sanders was targeted 8 times in that game, and has at least 6 targets in all but 1 game. He’s been a pleasant addition to this offense and Josh Allen trusts him. But, the main reason I think he will finish above WR26 this week is the matchup. The Dolphins are one of two teams that have allowed over 2000 yards passing this season. Coupling that with the Bills’ lack of run game and you have a recipe for fantasy points. Get Sanders in your lineup this week.

I have to own up to this one, I had Lockett as a ‘start’ last week and he managed two catches for 12 yards on 3 targets. It’s safe to say that I won’t be starting him until Russ gets back on the field. Is it possible that he could have a good game with Geno Smith throwing the ball? Sure. But, similarly to where I’m at with Allen Robinson, I have no idea if or when that will happen, and I can’t afford to play him each week hoping it does. If you have another option this week, I’d take it.

My other ‘sit’ this week is a holdover from week 7, and another former Alabama WR, Julio Jones. He really hasn’t been anywhere close to the WR I, and many others, expected him to be. Aside from his 128 yard performance in week 2 in Seattle, Julio hasn’t reached the 60 yard receiving mark in a single game. In fact, he’s only amassed 11 catches outside of that Seattle game. It’s hard to figure out if he or the aforementioned Allen Robinson have been a bigger disappointment this fantasy season.

If you have Julio, you probably are hoping for a big game at some point, but based on his performance this year, it doesn’t look like that’s coming soon. I am placing him in the category of not willing to play him until I see him have a good game again. And quite honestly, he might never sniff the production we grew accustomed to.

That’s it for week 8, feel free to reach out to me on Twitter (@tristancook_) if you have any specific questions for who I would start. There are also weekly office hours in the Facebook group and on Twitter each Sunday morning before the early games kick-off. There are a handful of writers that will answer all the questions posted, so you are usually able to get a few different takes on your situation. Make sure to come back next week to see how these picks turned out. Good luck!