Is Diontae Johnson no longer a must-start? @THEtristancook breaks down the WR Start/Sit options in Slant Pattern – Week 8! 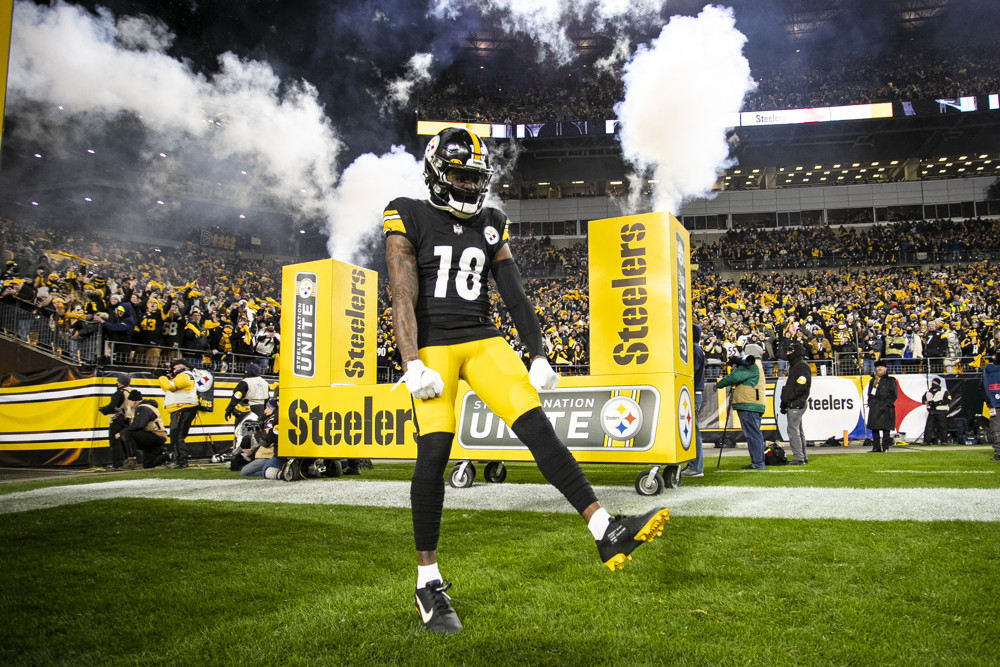 Hello and welcome back, Nerds! The Dynasty Nerds writers are here to provide you with weekly starts and sits. I will be doing the WR starts and sits for the 2022 season! As a group, we will make our recommendations based on weekly consensus PPR rankings from FantasyPros. Here is our squad and the position groups they will be covering to help you each week. Follow us, DM us, or tweet us.

NOTE: Rankings are based on a 12-team PPR league. So, saying WR2 means top 24, or TE1 means top 12, etc., and are pulled from FantasyPros consensus expert rankings.

Week 7 was a qualified success for my start/sit calls. My worst calls had Alec Pierce as a ‘start’ and DJ Moore as a ‘sit.’ I can’t say I expected to see PJ Walker and DJ Moore tear up the Buccaneers’ secondary, but that’s exactly what happened. Moore had his best game of the season, but it’s not something I’m anticipating will continue. As for Alec Pierce, he was only targeted four times. Not the result I expected, but time to move on.

Alternatively, my best calls of the week were to ‘sit’ both Courtland Sutton and Diontae Johnson and ‘start’ JuJu Smith-Schuster. JuJu finished as the WR4 on the week, while Courtland and Diontae finished 67th and 44th, respectively. My final call from last week was to ‘start’ Allen Lazard. He, unfortunately, was injured in the game and finished slightly below his ranking. Time to get to the calls for Week 8!

Jerry Jeudy is my first ‘start’ for Week 8. He is coming off one of his better games of the season last week in the home loss against the Jets. His name has been thrown around in trade rumors for most of the week. But, barring a surprise trade, I expect a big game for Jeudy in London. It looks like Russell Wilson is going to suit up for this game, and while Jeudy looked good with Brett Rypien throwing passes last week, I’m confident that he’ll put up good numbers regardless of who is throwing him the ball.

The biggest reason for this is the matchup. Jacksonville has allowed the 8th most yards passing this season but has been better against the run. So, considering the Broncos have had issues running the ball this year, I expect to see Russell Wilson air it out early and often. I’m playing Jerry Jeudy in what could be his final game for the Denver Broncos.

My next ‘start’ for Week 8 is Giants rookie Wan’Dale Robinson. There has been a lot made out of the recent Kadarius Toney trade, but the truth is that Toney wasn’t doing anything for New York prior to being moved, anyway. In fact, I had Wan’Dale as a ‘start’ before the trade took place. The Giants have been one of the year’s best stories so far without a true top-receiving option. I’m still not sold on Wan’Dale Robinson being that guy in the long term, but for this week, I’m all in. The matchup against Seattle doesn’t scare me, and I wouldn’t be surprised if this is the game where Wan’Dale breaks out. I’m playing him with confidence.

This week’s final ‘start’ is Falcons rookie Drake London. This call feels like the biggest risk of the week, and it’s probably because it is. The Falcons are doing a great job at not getting the ball into the hands of their two best offensive weapons. Neither Drake London nor Kyle Pitts has done much this year or of late, but I am optimistic that it will change against Carolina. I think the one target showing last week is more of an anomaly, and we will see London’s target share increase significantly this week. In a week with a few key players on BYE and injuries mounting, I would feel confident in playing Drake London against the Panthers. Count me in on a bounce-back week for Drake London.

My three ‘sits’ for Week 8 are all familiar names to this list. First up is Gabe Davis for the Buffalo Bills. I have had him as a ‘sit’ numerous times this year, including a few weeks back when he burned me. But I’m still firmly of the belief that his touchdown rate is unsustainable. Davis is a touchdown-dependent player and shouldn’t be ranked as a mid-level WR2 each week. Is he going to have weeks where he scores TDs and pays off? Yes. However, more often than not, he will struggle if he doesn’t find the end zone. I’m looking elsewhere if I have other viable options.

My last two ‘sits’ are holdovers from last week. Diontae Johnson was a good call to ‘sit’ last week, so I’m returning to the well this week. There are plenty of targets heading Diontae’s way for him to produce usable fantasy numbers, but the problem has been converting those targets into fantasy points.

Diontae is 4th in the NFL in targets but is 43rd in yards receiving. It’s a bit astonishing, really. Johnson has seen double-digit targets in 5 of 7 games this year but has only eclipsed the 60-yard mark once. I think until this Pittsburgh passing offense progresses a bit, Diontae Johnson is a low-end WR2 at best. You may not have other options that are better, but I’m trying to get Diontae out of my lineup this week.

My final ‘sit’ for Week 8 is DJ Moore. He made me look bad last week, but that was more of an outlier than a sign of life for the rest of this year. Like Diontae Johnson, DJ Moore struggles to convert his targets to fantasy points. He is the 18th most targeted receiver in the league but has the 54th most yards receiving.

There’s always a chance he goes off like last week, but I don’t expect to see that happen. I expect something closer to a 3/37/0 receiving line than we saw against Tampa Bay. I’d be looking to trade DJ Moore instead of putting him in my lineup.

That’s it for Week 8. Feel free to reach out to me on Twitter (@THEtristancook) if you have any specific questions about who I would start.