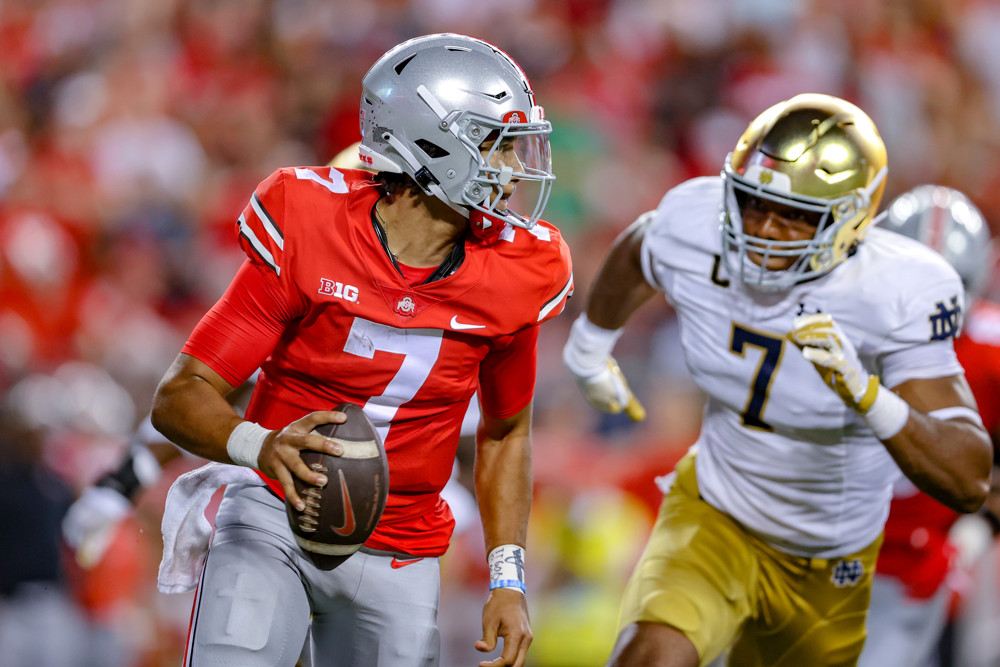 No college football program has more first-round NFL Draft picks than The Ohio State University. The Buckeyes will add to that total in April thanks to an elite crop of offensive talent that will add to the elite young talent pool in the NFL.

That also means an opportunity for sports bettors across the state to place wagers on who will be drafted and when they’ll be selected.

Major operators like BetMGM Ohio, which also touts the BetMGM Ohio bonus code for all new players, will have dozens of different player and team prop bets as we get closer to Apr. 27 and the start of the three-day draft.

Before the 2023 NFL Draft arrives, we’re looking at a few names, positions, and draft slots that we expect to appear in prop bets come late April.

Dating back to Michael Vick in 2001, 16 of the last 21 first-overall selections were quarterbacks (Walker, Garrett, Clowney, Fisher, Long, and Williams were the non-signal callers). Seeing as the Houston Texans have a major need at quarterback, it seems likely that they’ll be drafting a replacement for Davis Mills with the first overall pick.

Will that be Stroud? There’s certainly an argument after his Heisman-worthy campaign for the Buckeyes in which he threw for 3,340 yards and 37 touchdowns prior to the College Football Playoff. He can make every throw and is mobile when he needs to be—and he’ll be near, if not at, the top of the odds list for the first overall pick.

He’ll be battling it out with Alabama’s Bryce Young and potentially Kentucky’s Will Levis. There are also a few defensive lineman prospects that could wind up going first overall in Georgia’s Jalen Carter and Alabama’s Will Anderson.

Bucking the trend of the last few classes, it’s a down year for wide receivers. But don’t tell that to Jaxon Smith-Njigba, who could be the first receiver off the board in April. He was limited to just three games this season because of a lingering hamstring injury, but he put his full talent on display in 2021 (95 receptions, 1,606 yards, 9 touchdowns) as a sophomore and is all but a lock to be taken in the first round.

In terms of the first wide receiver off the board, he’ll be battling with TCU’s Quentin Johnson and USC’s Jordan Addison. Those are the only real first-round locks at this point (as always, plenty can change between now and April) so the odds shouldn’t be too big where there isn’t any value.

The Buckeyes had two receivers come off the board early last year in Garrett Wilson (No. 10 to the Jets) and Chris Olave (No. 12 to the Saints). JSN will add to that list of elite receivers taken in the first round. We’ll find out soon where that is, and the lack of receiving talent could wind up pushing up his draft slot for teams desperate for help in the passing game.

A pair of bookend offensive linemen to watch for

The skill positions get the highlights, but let’s not forget the importance of a great offensive line. Georgia had two tackles go in the first round in 2020 (Andrew Thomas and Isaiah Wilson), something that hadn’t been done since 1991 (Tennessee: Charles McRae, Antone Davis).

Could it happen again? Paris Johnson Jr. has a first-round grade attached to him and could see himself sneaking into the top 10 with a solid combine. His versatility is a calling guard after he played in 2021 at right guard and shifted to tackle in 2022. A blind-side protector for the potential top pick in the draft is a coveted position—and Johnson was great all season. He’ll contend with fellow Big Ten OT Peter Skoronski for the first offensive lineman selected in April.

On the other side, Dawand Jones has the potential to sneak into the first round if some team wants to take a chance on his incredible upside. He’s 6-foot-8, 350 pounds but has some great athleticism. He’s more likely a Day 2 selection, but there could be value on his first-round odds if he measures and interviews well.

Looking for a longshot that could potentially earn you a payday on draft day? Why not Zach Harrison? The former five-star prospect is a physical freak who excels at getting to the quarterback. He could test well (and he’s young at just 21 years old) and move into the late first round as teams continue to covet elite pass rushers.

While he may be more of a project at this point, that may be worth the risk. Athleticism like this doesn’t come around all that often. You’ll want to see what his first-round odds look like as we get closer to the draft. He could have his name called on Day 1.