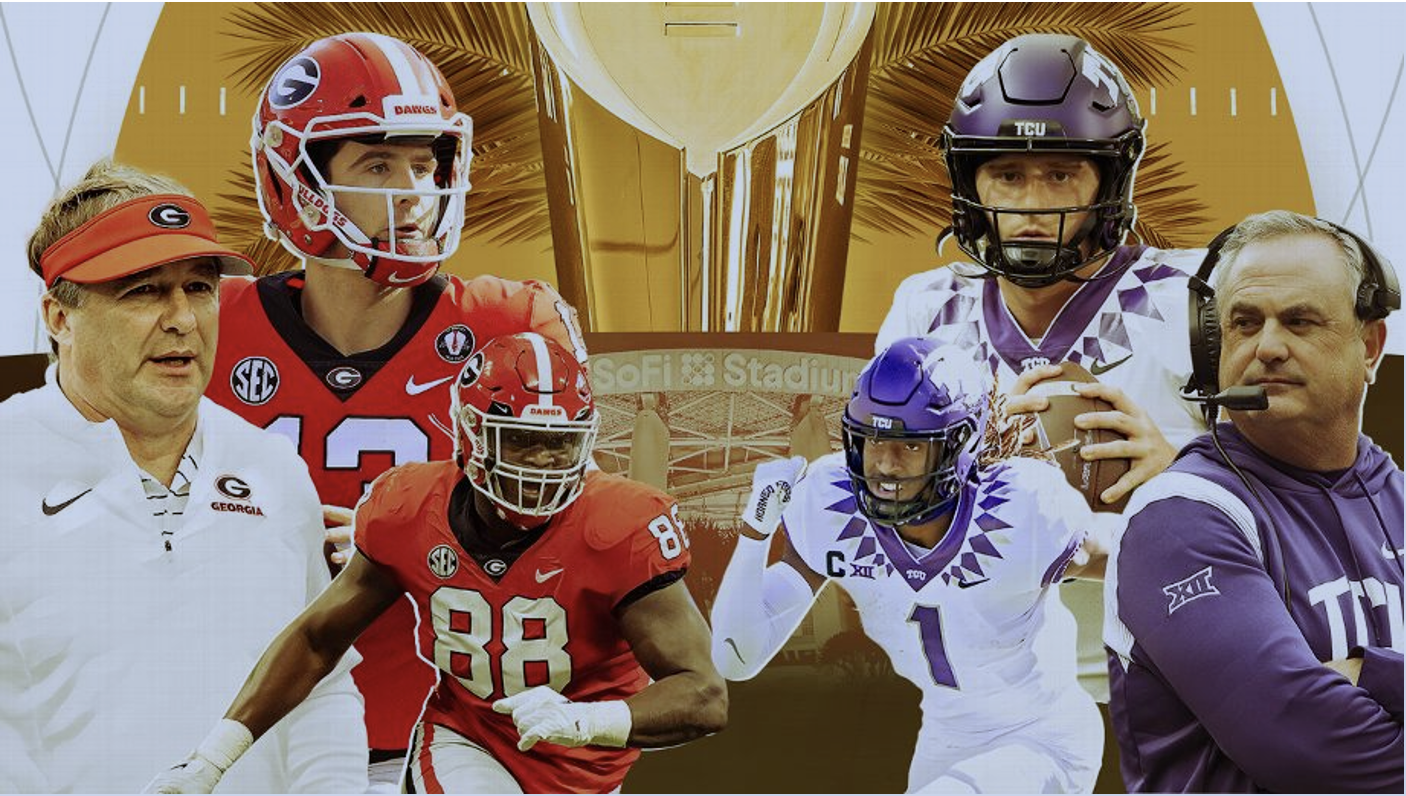 As the clock ticks down to the College Football Championships on January 9, theories have begun to form as to who will be victorious. The Georgia Bulldogs are set to face the Texas Christian University Horned Frogs at SoFi Stadium in California on said date in a highly-anticipated encounter

New Year’s Eve saw the defeat of the Michigan Wolverines against TCU in the Fiesta Bowl. The Horned Frogs dominated the field, finishing with a 51-45 win, securing their spot in the Championship finals and spoiling Michigan’s chance to earn a shot at their first title since 1938. Later that night, Ohio faced off against the Bulldogs and after a failed 50-yard field goal attempt by Noah Ruggles, the game concluded, leaving Georgia holding a marginal win at 42 – 41.

Bulldogs Coach Kirby Smart commented on their performance, admitting that “Ohio State probably deserved to win the game but we never quit. “We stayed in the game, made some big plays. I couldn’t be prouder of these kids.”

Ohio State was well within the top 5 teams leading the 2023 Championships, and it was certainly a frustrating loss for their team and anyone who placed a wager on their success via any Ohio sportsbook. Nonetheless, bettors may still be afforded a chance to cash in with next week’s championship game, particularly with an Ohio sportsbook promo code.

However, before locking in predictions, it would be wise to view the Sportsline Projection Model. This tool is a privately-owned computer model used to predict sports outcomes. Throughout the past few years, it has managed to benefit not only itself but many of its users, who have gained sizable profits.

Fresh off their triumph against Ohio State in the Peach Bowl, Georgia seems to be the favored team. The spread for this year’s Championship game is relatively large thanks to the high stakes, as well as Georgia having yet another chance to repeat as national champions. Thus far, the odds seem to be in the Bulldogs’ favor, as they are leading by 13 points according to the latest odds via the model. Also predicted is an over/under of 62 for total points scored.

Seeing that the Bulldogs have always won their games against the Horned Frogs (the two teams have met four times in previous years), with the most recent victory being during the 2016 Liberty Bowl, things are looking a bit bleak for TCU. The Bulldogs are hoping to acquire their first undefeated season since they won the title in 1980.

The way the bookmakers see it, Georgia will be the ones who leave Los Angeles with the bragging rights after this year’s championship game. They’re overwhelmingly favored at 2/9 while TCU has been attached to odds of 43/10.

The Horned Frogs almost joined the match undefeated as well, had they not lost to Kansas State last year. However, these underdogs fought hard to forge their own path to the finals. TCU Coach Sonny Dykes related how many people expressed their doubt over his team reaching the finals.

“All week we heard about Big 10 football and how they were going to line up and run over us. They made some great plays, but defensively we stopped the run and forced them to do some things they weren’t comfortable doing,” he said. “Couldn’t be more proud of the defense, thought they played incredibly hard and just like we expected them to.”

TCU even famously cost Jim Harbaugh an extra $1 million in incentives as the Wolverines coach would have received $500, for a victory last weekend, as well as another $500,000 for winning this month’s final. Harbaugh is now believed to be on the brink of returning to the NFL.

Coach Smart is understandably concerned given his next opponent’s miracle run and has expressed that ahead of the big game.

“I don’t know that we’re ready for TCU right now based on what I saw,” he said on ESPN. “We got a lot of work to do. I have tremendous respect for their program.”

While most predictions seem to be leaning toward the Bulldogs taking the Championship, TCU shouldn’t be counted out just yet. They have definitely proven that they deserve to hold a spot in the finals and are capable of winning their first title since 1938. Georgia will need to maintain their great defense and keep the pressure on to ensure their victory.