@johnnybgoodeFF reviews the injuries from Week 3 and what to expect going forward! 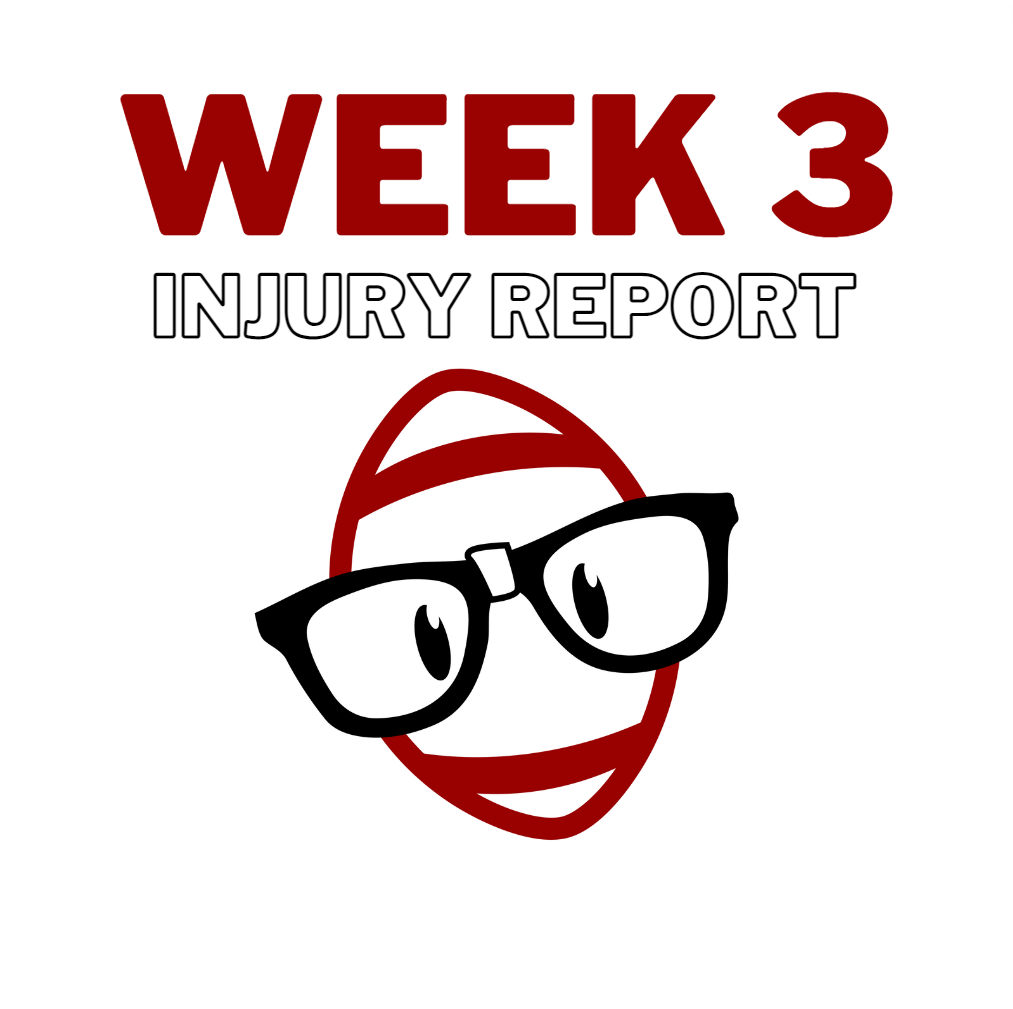 Week 3 injuries looked worse than many actually turned out to be. Let’s take a look at the carnage:

Seeking a second opinion usually means surgery is implied. At times, a high ankle sprain can be severe enough to warrant surgery to repair. In general, quarterbacks come back from a HAS much better than positional players such as a wide receiver or running back. Surgery would be the worst-case scenario and longer recovery. Not that Mac Jones had much mobility before his HAS, I would expect his mobility to be somewhat limited the rest of the season.

He was first thought to have suffered a concussion but apparently had back spasms that forced him out of the game. This is relatively manageable to allow Tua to continue to play. I don’t expect Tua to miss any time.

Cook has a history of shoulder dislocations going back to high school. With each dislocation, there is a further increase of risk for re-injury. The reason is that with each dislocation, the tissues that hold the head of the humerus in the “socket” become more lax. Cook has previously been diagnosed with a torn labrum in the shoulder and has not had this surgically repaired. The labrum is what provides stability to the “ball” on the “socket.” Imagine a golf ball on a tee, surrounded by a rubber band to keep the ball there. The rubber band is stretched out and torn. This results in a high risk of subsequent dislocations with less force needed than the previous. Cook may surprisingly be back this week wearing a harness. He played well with this the last time he wore one. My opinion on this situation is to sell Cook, but for those who hold, I would exercise caution as the risk of re-injury is very high.

Montgomery left Week 3 and watched Herbert explode against the Texans. At the least, Herbert may have proven himself worthy of more time in this backfield, even if Montgomery is healthy. Monitor Montgomery’s participation in practice this week; however, I expect him to suit up.

The concern about Swift isn’t necessarily that he misses two weeks, but here we go again with Swift getting hurt. His workload is somewhat managed in Detroit, yet he still manages to get hurt. This makes me wonder if it’s a playing style issue rather than bad luck. When Swift returns, I would not expect this injury to limit him much. However, the issue remains that if he continues to get hurt, we may look back at September 2022 as Swift’s “sell high point.”

Bone bruises take a long time to heal, so this is potentially a multi-week injury for Green. Moore coming back and Hopkins waiting in the wings will provide this offense some much needed help. It’s possible when AJ Green returns, he’s looking at a much more crowded depth chart than what we currently see in Arizona.

Initially, this looked somewhat serious, but he received good news Monday and is likely to play this week.

What a tough break for Shepard. First, he tore his left Achilles in 2021, and now his left ACL. Considering this was a non-contact ACL tear, this brings me to question if his previous Achilles tear/recovery had anything to do with his risk of ACL injury in that same lower extremity. In my opinion, Achilles tears aren’t given the respect they deserve with regard to how crippling they can be for an athlete. Coming off of back-to-back season-ending injuries and 30 years old next season, you can safely move on from Shepard in dynasty.

St. Brown avoided any serious injury, which I can hypothesize was a suspected high ankle sprain. He may miss Week 4 but should be back by Week 5 at the latest. Not much concern since he seemed to avoid a HAS.

This injury was on the opposite foot from his ankle injury last year. Diagnoses unknown. It has been reported that he avoided serious injury. He could be back as early as Week 4. Monitor his participation in practice closely this week. The good news is we will know his status early Sunday as New Orleans plays in London this week.

Death, taxes, and Sammy Watkins landing on IR. When Watkins comes back, it’s very possible that someone else (Doubs) has relegated Watkins to the bench. Placed on IR, Watkins has to miss at least the next four games. It might be time to officially move on from Watkins if you haven’t already.