The Art Of Cascading Trades

How can you create and build value on your dynasty team? @LakeSlabachFF takes us through the art of cascading trades! 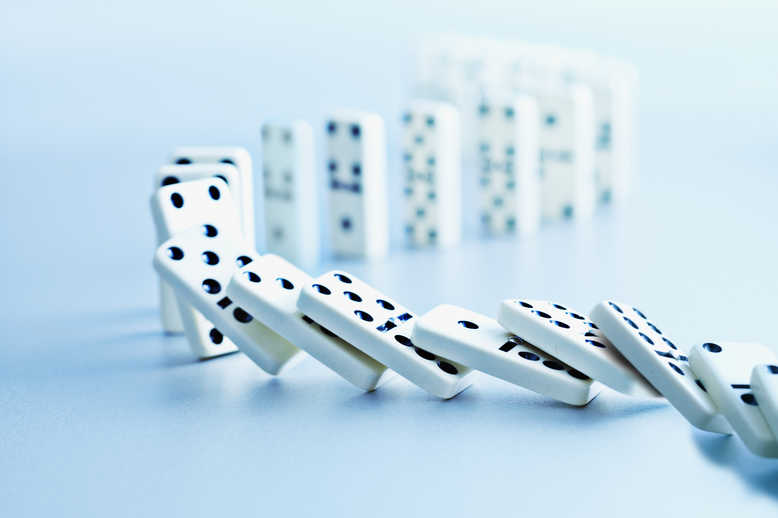 This past August, my boss took my coworkers and me on a camping retreat. We headed up to the mountains of North Carolina, just beyond Boone, for rest, relaxation, and team bonding.

On our first afternoon at the site, we heard from other campers about an awesome set of waterfalls just a short hike away. So, we packed up, drove as far as we could in the Jeep, and then hopped out to hike what they had told us was a short distance. In reality, this was true. It wasn’t a long hike, but it was a hike down one of the steepest trails I have ever been on. It was slow, painstaking hiking. For most of the hike, we were on all-fours, edging along with the help of ropes attached to the side of the mountain. Regardless, when we got to the bottom, the falls were just as beautiful as promised. There were three separate levels of falls, with people being able to climb up and jump from one down to the next level and again down one more level.

It was one of the most beautiful, hardest to get to, gorgeous places I have ever been, and it was so worth the hike. Welcome to the world of cascading trades. This strategy is tough. It takes a ton of leg work. It can be painstaking and slow. But when you see one trade lead into another as the value on your team builds and builds, it will be so worth the work.

What is Cascading Trades?

So what do I mean by “Cascading Trades?” Here’s a definition I will be using:

Cascading Trades occur when a dynasty manager trades for multiple assets intending to keep one or more of them while using the remaining assets in a future trade or trades.

Translation: I hardly ever make trades with just that trade in mind. Yes, there are times in-season when you are making a push for a championship that you make a one-for-one trade or even combine multiple of your own assets to go after a positional upgrade. But, I believe those should be the exception and not the rule. Instead, I want to go after the value, building it throughout my team. So that when the moment for those “win-now” moves comes, I’m ready. Let’s look at an example:

Now, right off the bat, I am not trading Keenan Allen or DJ Moore. Why? VALUE. Keenan Allen was a top 10 WR in 2020. He has a young QB and little competition. Yet it would be tough to trade him for even a 2021 first and second (side note, if you’re a contender and don’t own Allen, fix that now). DJ Moore had a disappointing 2020 compared to expectations after a ton of preseason hype; he just turned 24, is in the 2nd year of Joe Brady’s offense, and still the most talented WR on his team. So, I anticipate Moore’s value being considerably higher at this point next year, and thus I would be missing out on value.

That leaves Hill and Jefferson. Each of these players is valued extremely high, but between the two of them, I am trading Jefferson. Why? Already valued at a consensus top 5 dynasty WR (if not higher), Jefferson appears set for a long successful career, but three factors should be considered.

Identify Value at Your Position of Need

So, if Jefferson is who we are going to trade, who should we target? Should we go to the Dalvin Cook or Saquon Barkley owner and try to trade 1-for-1? No! We’re going to cascade Justin Jefferson into more than one asset of value. First, we take a look and what running backs we believe to be values currently. For the sake of our example:

Upon closer examination, the Joe Mixon manager needs a wide receiver and owns the 2021 Rookie 1.03. We offer Justin Jefferson for Mixon, 1.03 and their ‘22 1st, and they counter Mixon, 1.03, Curtis Samuel, and we accept.

Now, we have added a running back and still have a solid WR room, we can use our 1.03 and move on, or we can continue to cascade our trade. We lost Justin Jefferson, a young promising receiver, and so we’re going to use that 1.03 to not only continue building value but to try and fill that gap as well. So, we go to the Jerry Jeudy owner and offer 1.03 for Jeudy and 1.10, and they accept. We can continue doing this or package a couple of these pieces (1.10 & Samuel) to target one of our other running back values or stop and make our pick. As we have cascaded this trade, we started with a running back needy team and sent Justin Jefferson away for:

This has kept our receiver room young, but now we have room to accumulate value. It gives us a shot at another young piece through trade or the draft, and we filled a hole at running back with Joe Mixon.

This is, of course, a hypothetical situation, and in reality, it takes back and forth, counteroffers upon counteroffers, and more time than this, but the payoff is worth it! Really what it comes down to is assessing your team needs and assessing the value of your players relative to where the value could go from here (higher/lower). So, the next time you go to make a trade, ask yourself these questions:

Cascading trades is not easy; you will hear “no” more than you hear “yes,” but over time, deals like this will help you accumulate value, grow your team, and win dynasty fantasy football championships!