@TheHQNerd pops in with his C2C report. Who’s on the rise and who’s stock is falling to begin the college football season? 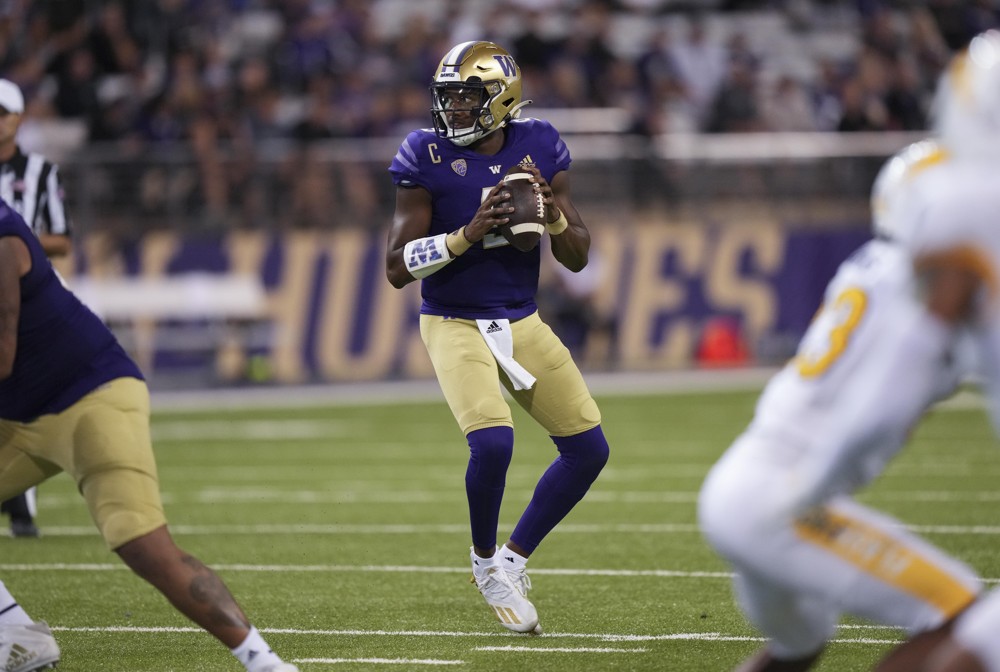 A few years ago, I didn’t really even know what a Campus To Canton league was. I have always loved college football. And I even played college fantasy football, but something was missing. I stumbled onto a Twitter post about joining a C2C league and decided to take the plunge. Last year I completed my first full season playing C2C and now enter year two, having picked up a few more leagues.

I’m excited to dive into my first C2C-only article for Dynasty Nerds. I hope to bring you more in the future as the college football season progresses.

This article aims to look into player performances through the first few weeks of college football. Who’s stock is on the rise? Who’s stock has declined?

Let’s get to it NerdHerd!

Penix has been one of the best feel-good stories in the 2022 season. Not only did he win the starting quarterback job this offseason for Washington, but he’s also starting to run away with it. Penix had to overcome multiple injuries throughout his collegiate career, but the Indiana transfer has found new life working with his former offensive coordinator, now head coach Kalen DeBoer.

Penix has been on fire in his first two starts, averaging 32.39 fantasy points per game against Kent State and Portland State. He’s completed 69.7 % of his passes and totaled six touchdowns to only one interception. The competition gets tougher this week as Washington hosts eleventh-ranked Michigan State. With DeBoer as his offensive coordinator in 2019, Penix Jr. put 386 yards and four total touchdowns against Michigan State. Let’s see if he can do it again.

No matter the result, Penix is back on the radar. He should be a viable weekly play this year in the Pac-12.

Let’s stick with the transfer theme here again. Wisconsin transfer Berger has thrived in his new surroundings in East Lansing. Mel Tucker has once again found a new horse to ride. Berger and Colorado transfer Jarek Broussard have formed a formidable duo to start the season. Through two games, Berger is averaging 6.9 yards per carry for 227 yards and four total touchdowns. He is averaging 23.2 fantasy points per game.

Berger faces his first real test of the season this week when the Spartans travel west to take on Washington. I like Berger’s chances of staying relevant throughout the season. Tucker knows you have to run the ball in the Big 10 when the weather starts to change.

So far, Berger has turned out to be a fantastic option for C2C purposes at a very minimal cost. There’s even a shot for NFL potential as well.

Jurkovec didn’t come back for this. It’s been a rough start to the season for the Boston College signal caller. The Eagles are 0-2, and Jurkovec is only completing 55% of his passes. He has almost as many interceptions, three, as touchdowns, four.

To be fair, the Eagle’s offensive line has been downright brutal. Jurkovec often is running for his life, trying to make things happen. But for C2C purposes, it’s all about results, and averaging 14.61 fantasy points per game won’t cut it. The Eagles have an easy tune-up this week versus Maine, so Jurkovec should bounce back, but they head into conference play immediately after that. Enjoy this week because the rest of the season may be a bumpy ride.

It hasn’t gone as expected so far for Ford fantasy managers. He has gone from being one of Malik Cunningham’s favorite targets last year (49/550/2) to being limited to just five receptions for 50 yards through two games to start the season.

Off-season, C2C drafters were expecting bigger things from Ford heading into his final season. Averaging five fantasy points per game has left much to be desired. The Louisville offense right now is a mess.

Make sure you subscribe to the #NerdHerd, where you get exclusive content, dynasty/rookie/devy rankings, a buy/sell tool, and a bonus podcast too. Dynasty Nerds also recently launched the #DynastyGM tool, a complete game-changer in the fantasy industry. Click here for a free trial. We truly are your one-stop shop for all your fantasy football needs!