The Cutback: Running Back Start/Sit Week 1

Gage Bridgford (@GbridgfordNFL) takes you through the starts and sits at the running back position for Week 1 of the 2020 NFL season. 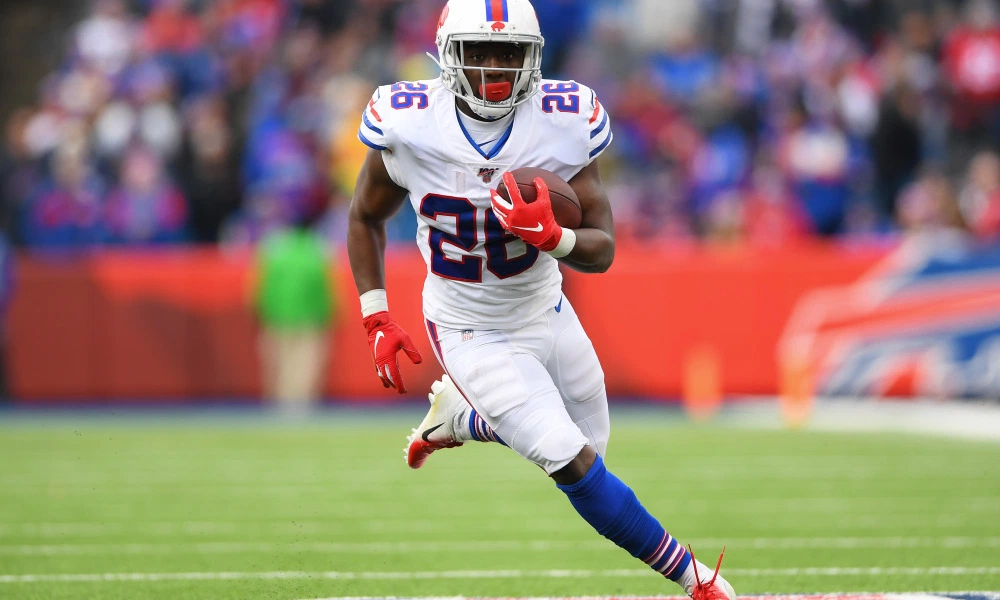 We’re starting with a good one. 49ers running back Raheem Mostert is the lead guy, and he’s got an absolutely delicious matchup for Week 1. The Arizona Cardinals ranked as the 26th-best team against running backs last season, and they still have a lot to improve upon on that side of the ball. They’ve brought in Isaiah Simmons, but this 49ers’ rushing attack is a special kind of beast.

The 49ers were second in the NFL in rushing yards last season with an average of 144.1 yards per game. With the addition of Trent Williams on the left side, the argument can be made for them to improve on that. Leading the way will be Mostert, who was on the warpath in last year’s playoffs. He was averaging 6.34 yards per carry with five touchdowns in three games. 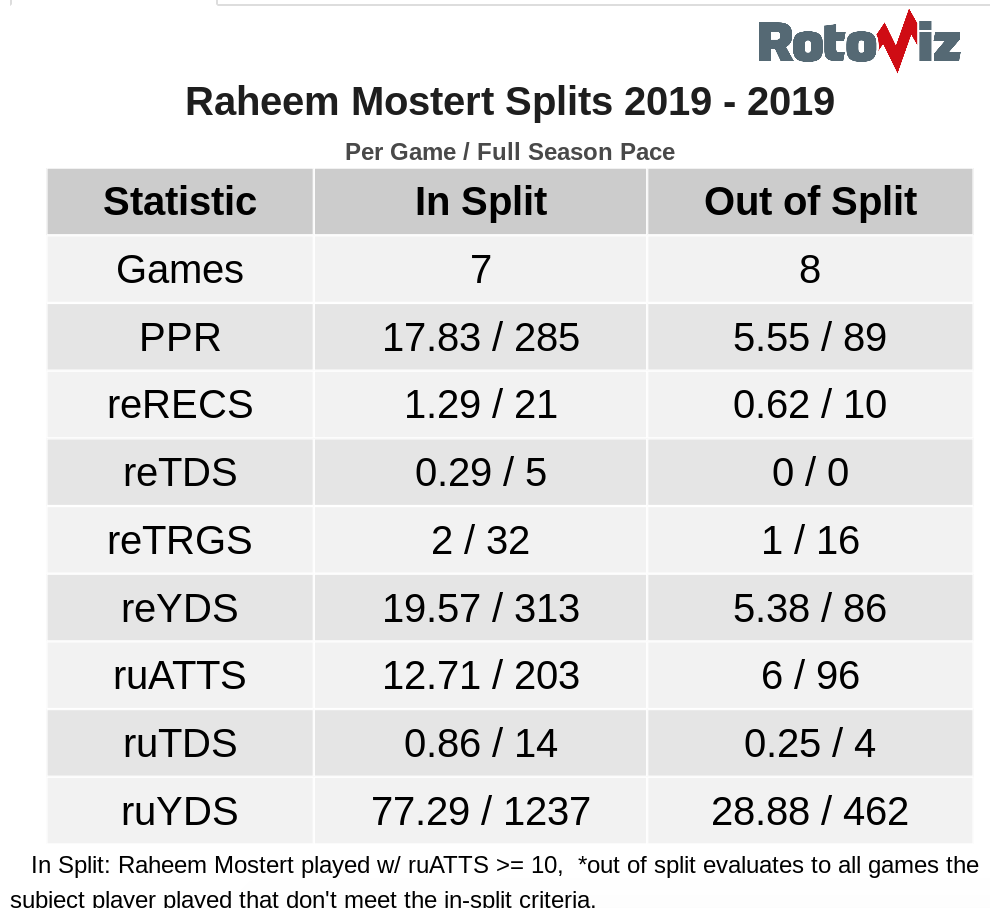 In San Francisco, they have a lot of mouths to feed in the backfield, but Mostert is the one to feature. In games where he saw at least 10 carries last season, he was averaging nearly 18 PPR points per game. If he had maintained that pace for an entire season, he would have been RB7 on a point per game basis.

In Week 1, he catches an Arizona Cardinals’ defense that ranked 26th against running backs last season. While we might see some touches for Tevin Coleman and Jerick McKinnon, Mostert figures to be the lead guy. On a team lacking for receiving weapons due to injury, Mostert has a high ceiling for Week 1.

The Colts drafted Jonathan Taylor early in the second round to be their go-to back of the future. However, he’s not going to have that job from the outset of this season. All of the reports have made that clear, and the depth charts tell the same story. Because of that, I’m taking advantage of it by getting Marlon Mack in my lineups for Week 1. He’s got an outstanding matchup against the Jacksonville Jaguars, and he’s trending as a strong option for this week.

The Jaguars are a shell of the team that went to the AFC championship game just a few years ago. With Yannick Ngakoue officially out of the building to the Minnesota Vikings, this defensive line is really young. They’re going against one of the NFL’s best offensive lines in Indianapolis. Throw in a young quarterback against a technically sound defense, and the Colts should get up early in the game. 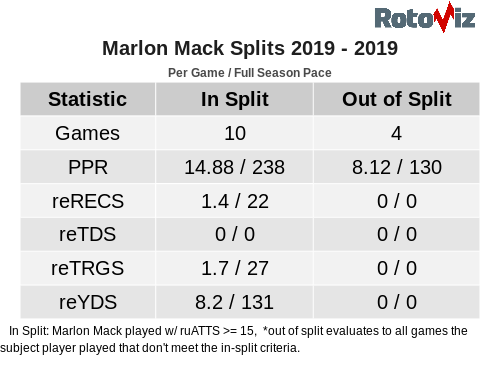 Mack has always been a big downhill runner. He isn’t the shiftiest back, and he does his best work late in the game when he’s been wearing a defense down. Against Jacksonville last season, he averaged 6.4 yards per carry in his two games against them. He’s had success against this team in the past, and they’re an even worse version of themselves now than they were previously.

On top of that, you have quarterback Phillip Rivers, who is in his first year in a new system in an extremely limited offseason. They’ll likely try and keep things simple out of the gate by relying on their running backs to do the heavy lifting. Taylor may take this job over as the year goes on, but I think it’s Mack’s out of the gate.

The reports are out that Adrian Peterson will see a “heavy” workload early on. While I don’t have a lot of trust in that because of his recent arrival, I know Kerryon Johnson will also receive some work. Regardless of who the lead back is, I wouldn’t start them against this Chicago Bears’ defense. This group may not be what they were in 2018, but they’re still a pretty damn good group.

If Robert Quinn can live up to his contract, you’ll have a front that features he, Khalil Mack, and Akiem Hicks to rush the passer. They’re all strong run defenders in their own right as this unit finished ninth against running backs last season. Oh, did I mention that this Lions’ offensive line got noticeably worse this offseason when they swapped out their right tackles? They did, and Halapoulivaati Vaitai is a downgrade from Ricky Wagner.

In addition to the great defense they’re playing, these backs will vulture each other’s value. Johnson still seems unsure about his knee maintaining a full workload, and Peterson is fully up to speed to the point he could carry a full workload out of the gate. They could both put up seven points on the day, which is a decent day collectively of 14, but it looks awful when one of your starting running backs has that.

Also, this team still has Matthew Stafford under center. He’s coming off of a back injury that cut his 2019 season in half, but he’s still one of the better quarterbacks in the league and has a great supporting cast of receivers. This team will want to stay balanced in the running game in the long term, but I don’t think they accomplish much of that in Week 1.

This isn’t the sexiest option, but it is one that bears mentioning. After the surprise release of Leonard Fournette, a lot of touches just opened up down in Duval County. With Ryquell Armstead on injured reserve, those touches are presumingly going to rookie running back James Robinson. In terms of volume, he looks good on paper, but you can’t trust him with all of the question marks around him.

For one, Robinson has never seen any live NFL action. He’s never even seen a preseason rep. Other than guys dealing with injuries in the past, rookies usually get at least that opportunity against a team’s third or fourth string defenses. He doesn’t get that, and he’s going up against a team that finished 12th against running backs last season. That 12th place finish is also before they added DeForest Buckner this offseason, which solidifies their front.

For his college career, Robinson was productive, but that comes with a caveat. He played at the FCS level. While there are multiple former FCS guys in the league, they don’t always translate, and Robinson has never even had the opportunity to play against this level of competition. He did average 5.6 yards per carry, which is great, but he still wasn’t running circles around guys at that level.

Add in the fact that Fournette was cut less than two weeks ago and had been taking the first-team reps all offseason, and Robinson is trying to go upstream without a paddle. I think the Colts will get up early in the game, and they’re going to force Jacksonville to throw. When that happens, Robinson won’t be on the field, which means even fewer points for him.

All offseason, Devin Singletary was the hyped-up sleeper that everyone wanted to own. He was being drafted in the top 20 of running backs with some talking that he could be an RB1 this year. Then, a slow descent began to occur. There were rumors he wasn’t big enough to handle a full workload, and the team drafted Zack Moss in the third round. They traded away a handful of picks for Stefon Diggs, but they made it a priority to use one of the remaining ones on a running back.

That downward spiral has continued for Singletary during training camp. After struggling with fumbles last season, those issues have remained present throughout camp, with him still having ball-security problems. Things like that are what get you put on the sideline because a coach can’t trust you to take care of the ball. Moss is going to receive some run, and it might be more than we expect.

The New York Jets roster is bad, but the one thing they do well is stop the run. They were ranked 10th against the run last season, and, although they lost Jamal Adams this offseason, the rest of the defense from last year is still present. If they get internal development from guys like Quinnen Williams and Tarrell Basham, this group could be even better. The secondary is where they can be exposed.

This game has a low expected total, and I think Buffalo moves the ball through the air more than on the ground. If that ends up being the case, we’re not going to see Singletary rack up a lot of carries. Unless he receives a heavy receiving workload, he’s just going to be a letdown for the week. Better options are available, and hopefully, you have them on your team.