Week 10 is here of the NFL Season, @DarthDbacks gives you some running back start/sit this week in order to win your fantasy football matchup. Good Luck! 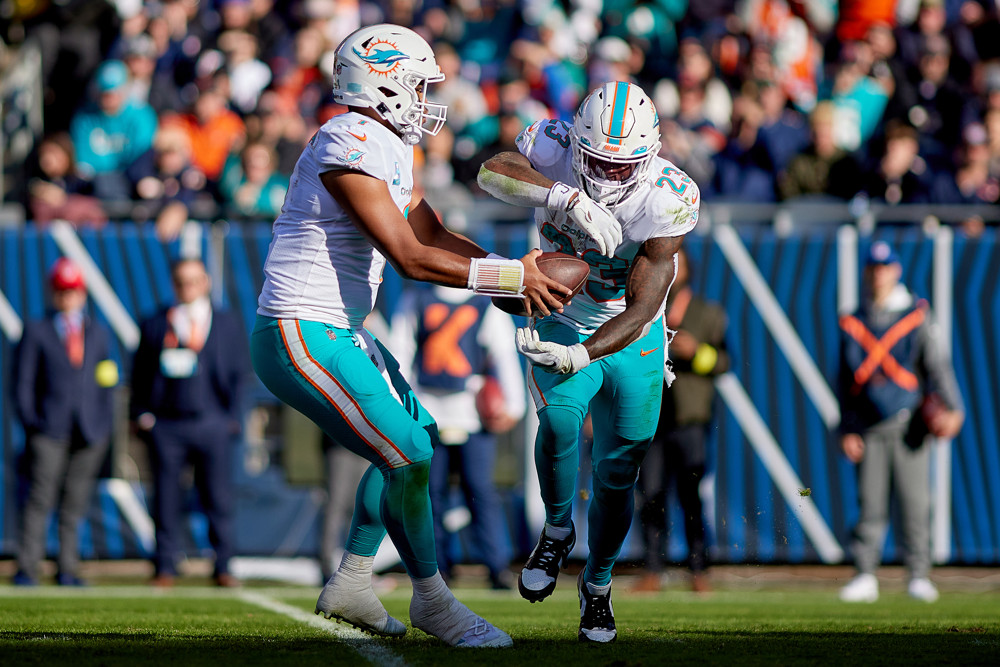 Week 10 of the NFL Season is already here. It’s flying by, sadly, so make sure you sit back and enjoy it. It’s mind-boggling it’s already this deep into the season. Also, enjoy the chaos, as this fantasy football season is unlike anything we have ever experienced. It’s a scary sight. Look below at my running back start/sit for Week 10. Make sure to enjoy this NFL Sunday because there aren’t many left.

Week 9 is in the books, and it was a chaotic week again. We saw big-time performances from names like Joe Mixon, Kenneth Walker, James Robinson, and others. At the same time, we saw injuries occur to Jonathan Taylor and others. Sigh. Now we are onto Week 10 in what will hopefully be a much better football week. I’ll be helping the Nerd Herd out this season with some running back Start/Sit for that week of fantasy football. Analysis and reasoning will be provided for every player that I mentioned. I’m here to help you win your fantasy football week and, ultimately, the championship. You might remember me from last year as I covered whom to start/sit at tight end. This year, I’m covering the running back start/sit.

Week 9 was interesting, especially since no one foresaw Raheem Blackshear or Michael Carter being top-12 options or Joe Mixon scoring five touchdowns. With that said, I was right in saying to start whichever Cardinals running back started for them, as James Conner finished as the RB19 on the week. I was also right in benching AJ Dillon, who just can’t be trusted at all right now. As for the others, I whiffed. I didn’t foresee Tyler Allgeier averaging 9.9 yards per carry. Nor did I think Gibby would disappear or that the Saints would let Kenyan Drake score two touchdowns. My apologies, but let’s hope Week 10 fares much better for all of us!

Wilson had a strong first week with Miami, where he finished as the RB8 on the week with a touchdown, three receptions for 21 yards, and nine rushes for 51 yards. It’s incredibly encouraging to see him have gotten 12 targets already. He had the same number of rushes as Mostert, with three targets to only two for Mostert. Might Wilson have already taken over the Miami backfield? It’s quite possible. This week, Miami faces the Cleveland Browns. The Browns give up the fourth-most points to opposing running backs. This sets up a strong scenario for Wilson to do well and outdo his vastly underrated RB28 expectation. If you have, make sure you start him.

I think this is a get-right game for Fournette. The Seahawks can be attacked via the ground game, in which they rank ninth overall in most points to running backs. Fournette is still getting a lot of work, especially in the passing game. This means there’s an excellent opportunity for PPR points to be had. Last week he had seven targets and caught five for 41 yards. That’s over nine points right there. Should he score a touchdown, he could easily finish in the top ten running backs for Week 10.

Jones is dealing with an ankle injury, and it’s no guarantee he even plays in Week 10. If he does, he could likely be limited or sparingly used. In that case, AJ Dillon might finally have a good week, but you should likely avoid Jones if you can this week. Like the rest of the Packers’ offense, Jones struggled against the not-great Detroit Lions’ defense. He had nine rushes for 25 yards and only two catches for 20 yards. Now he faces a much harder defense in the Cowboys. I doubt that Jones can improve upon his RB13 expectation. If you have the depth, look into benching Jones for this week.

Right now, I’m not sure about the injury status of Josh Allen. If he’s out, then Singletary could get a lot of work, but defenses will stack the box. If Allen plays, then Singletary will continue to get used sporadically and without much upside for fantasy unless he scores a touchdown. Last week, he had eight carries for 24 yards and four catches for 24 yards on five targets. Those are abysmal numbers, except for the fact Singletary had 12 touches. This week, he faces the tough Vikings defense, who are giving up the 27th most points to running backs. I think it’s a safe bet that Singletary doesn’t do much this week and can be put on your bench.