Week 10 is here, and @GBridgfordNFL is back to provide you with your weekly starts and sits, and we’re here to talk running backs. 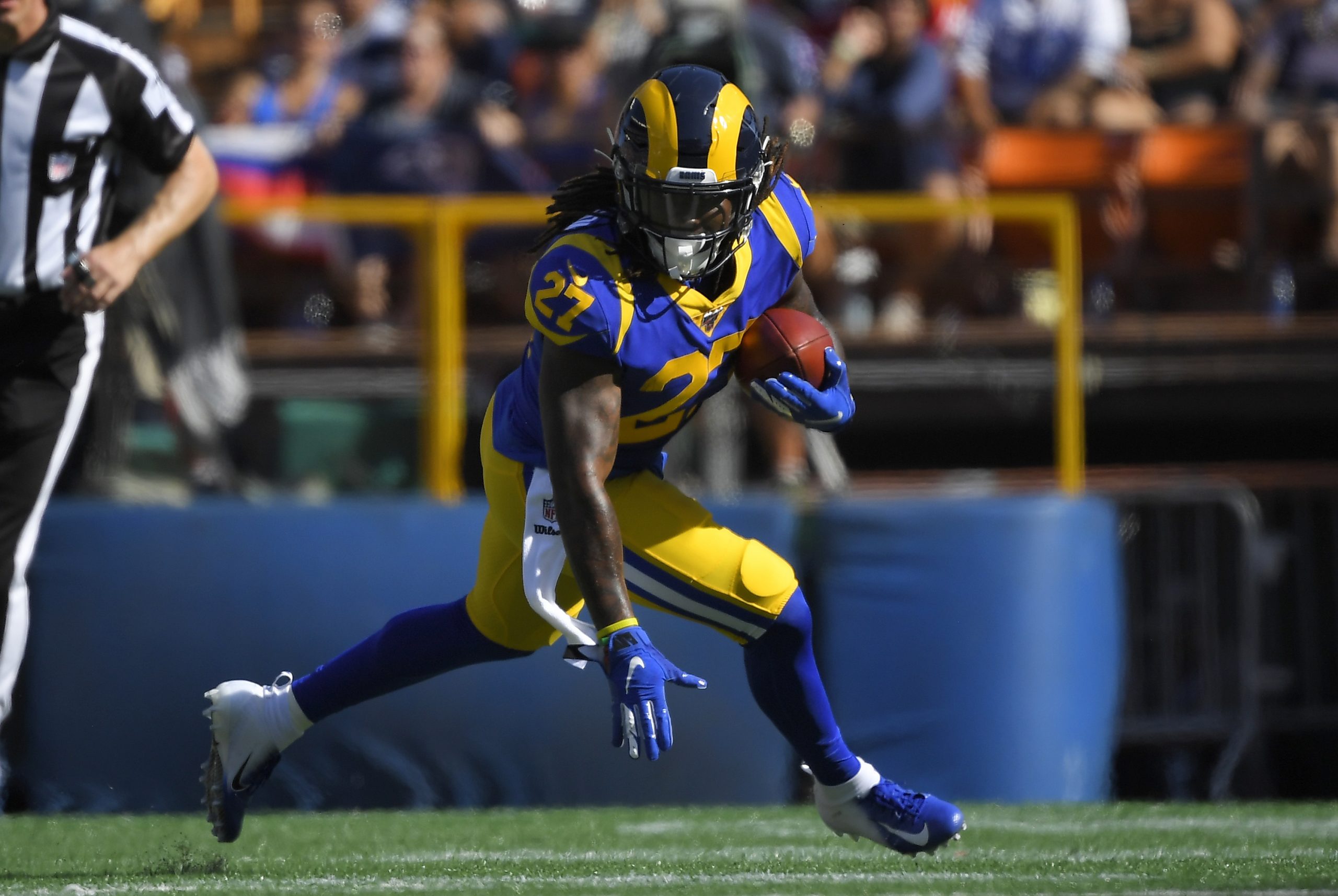 Welcome Back! Week 10 is here, and the DynastyNerds writers are back once again to provide you with your weekly starts and sits. We will be making our recommendations based on weekly consensus PPR rankings from FantasyPros. Here are the cast and the position groups they will be covering to help you win your week. Follow their socials, and be sure to check out their picks for this week as well.

Well, this wasn’t the best week we’ve had this season, was it? Harris saw a pair of rushing touchdowns vultured by quarterback Cam Newton, and he left the game late, which could have given him some extra value. For Harris, his team needs to sit on leads with him as the focal point, but they were down big, which didn’t allow them to run heavily. Lindsay fell into a similar hole. The Broncos were down 27-6 heading into the final quarter. The running game was long out the window. They were taken out of the way they wanted to play ball, and that limited his work.

While we missed the starts, we crushed the sits. All three choices finished as RB5s or worse for 12-team leagues. Jones and the Bucs got their doors blown off, and he saw fewer than half of the snaps of teammate Leonard Fournette. The Hasty pick went well as the 49ers leaned on Jerick McKinnon, who saw 74 percent of the snaps and 15 of the 21 running back touches. When Bell got to the Kansas City Chiefs, it was assumed he would be at least a flex option, and he has only continued to trend downward. Maybe the bye week changes things, but don’t count on it.

The saying in fantasy that reigns supreme and will continue to do so for all time is that volume reigns supreme. Teammate David Johnson (concussion) is considered questionable for Week 10, but it wouldn’t be a surprise for him to miss this contest. If that were the case, Johnson would have a stranglehold on the backfield work. In Week 9, that happened, and he went on to have an RB1 day with 15.3 PPR points.

In 86 career games, Johnson has seen eight or more carries just 13 times. In those games, he averaged just under 4.0 more PPR points per game more than in the other 73 games. He saw 16 carries last week to go with his usual work in the receiving game to the tune of four receptions on four targets. His 13.16 career average would have made him RB14 in Week 9. It’s also a revenge game for him after multiple years as a backup in Cleveland.

The Browns are giving up an average of 18.1 fantasy points per game to the running back position. They’re allowing running backs to catch over 80 percent of the passes thrown their direction, and that’s where Johnson has made his bread throughout his career. Between his work in the passing game and his increased rushing volume, he has the potential for a strong day this week.

With every week that goes by, it’s becoming more and more clear that Fournette is going to be this team’s lead back. Since he returned from injury, he has been the lead back, and his share of the snaps has remained significant compared to Jones. In Weeks 7 & 8, it was an early mistake by Jones that knocked him into the doghouse. In Week 9, Bruce Arians just decided that it would be Fournette to lead the charge.

In the 42 games that Fournette has played in his career, he has gotten at least ten carries in 37 games. Three of the five games he didn’t have came this season. As we have seen over the last two years, his receiving game has dramatically improved. He’s caught at least three balls in four of the six games that he’s played this year, and he is catching a higher percentage of his balls than Jones.

Against the Panthers, he has a top-five matchup for the week. The Panthers allow over 20 fantasy points per game to the running back position, which is the fifth-worst mark in football. After getting smacked around last week, we could see the Bucs come out early and build a lead. Once that’s done, they can lean on the running game with Fournette as the leading option of that backfield.

Man, we’re flipping on McKinnon really fast. One week after he was the case for benching his teammate, he’s getting knocked down into the sits column. In Week 9, he saw over 70 percent of the snaps and dominated the backfield. Despite that, he should be faded this week against an elite New Orleans Saints’ front.

The Saints’ defense struggled to start the season, but they have turned the corner as of late, especially against the run. They’re allowing just 13.8 PPR points per game to running backs. This is a result of two parts. They allow teams to move the ball through the air, and they’re putting up points, which is forcing teams to abandon the running game. Against a 49ers’ defense that is struggling to slow teams down, they’re going to be able to do that again.

McKinnon will still be the leading man in the receiving role, but this team won’t be able to run the ball as much as they could against the Green Bay Packers. This is likely the last week of value for McKinnon as teammates Raheem Mostert and Tevin Coleman are trending towards playing in Week 11.

He was a starter in Week 9, but he’s on the bench this week. Harris left the early game in Week 9, but he’s trending towards playing in Week 10. Despite that, you shouldn’t be rushing to get him in your lineups for the week. For one, he still doesn’t have a complete hold of the snaps for his roster. Rex Burkhead and James White are still getting a fair bit of work on their own. He also comes off the field more when the team is trailing.

When the Patriots are competing and winning, Harris is a solid asset to have for fantasy. The problem is that they aren’t doing that this year. Their defense isn’t able to slow teams down like they could last year, and things are about to be that way in Week 10 against the Baltimore Ravens, who have scored at least 20 points in all eight games, and they’ve gone for 24+ in 7-of-8.

The Ravens’ offense isn’t quite a buzzsaw, but they have a pretty great defense. They’re leading the NFL in terms of fantasy points allowed to the running back position, and they’re allowing just 13.6 PPR points per game. Between a bad defensive matchup and facing a team that can score, Harris just shouldn’t be trotted out there this week.

The Rams love to run the ball with Darrell Henderson, especially when they’re leading. When they’re trailing, things can get difficult in a hurry. In Week 8, against the Miami Dolphins, they were trailing heavily, and his role evaporated. He finished third on the team among running backs in touches and snaps, and it was the first time since Week 1 that he had fewer than 39 percent of the snaps.

This is why you have to have some nerves about playing Henderson. In the games where he sees less than ten carries this year, his fantasy value just disappears. He doesn’t get a ton of volume, and that makes him touchdown reliant. On a team that sees Malcolm Brown get a lot of the touches down around the goal line, that makes his life a lot more difficult for fantasy.

The Seahawks aren’t an elite defense by any stretch of the imagination, but they play defense using their offense. They average over 34 points per game, which leads the NFL by 2.4 points. That high-scoring pace forces opponents to throw more than they would normally like. For the Rams, when they’re throwing, Henderson is the one on the sidelines.