The Cutback: Running Back Start/Sit Week 12

Week 12 is here, and @GBridgfordNFL is back to provide you with your weekly starts and sits, and we’re here to talk running backs. 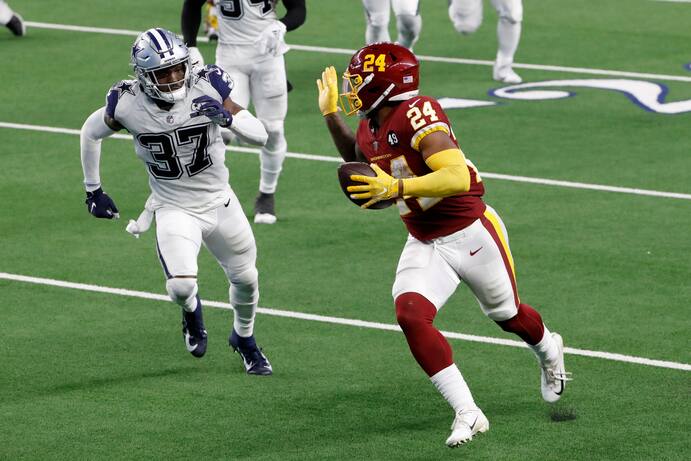 Welcome aboard! Week 12 is here, and the Dynasty Nerds writers are back once again to provide you with your weekly starts and sits.

Well, that was a bad week, wasn’t it? We missed on the Williams call, although that was reliant on Clyde Edwards-Helaire sitting out, and he was active as the lead back. Wilson and the 49ers had six different chances from the one-yard line to score during the day. He scored none of those times, with the team throwing several touchdowns. Our final miss was Michael Carter, who was close to being a hit, but he exited the game early with an injury, and there’s just nothing that can be done there.

With Conner, it was the idea that he wouldn’t just continue to find the end zone. I was wrong as he found the end zone again. Gibson ended up being the lone hit of the week, and the week was just nonsense from start to finish. Gibson was RB27 with 7.5 PPR points. That would have been RB39 the week before. Running back was a couple of big performances at the top of the class, and it was a bunch of other random outcomes after that.

We hit on fading Gibson last week, and we’re reversing course this week by backing the second-year running back with the Washington Football Team. Gibson only had two more snaps than teammate J.D. McKissic last week, but this matchup with the Seattle Seahawks is one that he should be able to put in a substantial bit of work for a solid week of fantasy production on Monday night.

This is a tough call because the New York Giants’ offense has given you no reason to have any confidence thus far, but this week could be the one where Barkley goes off. This season, the Eagles have allowed the fourth-most fantasy points to opposing RBs, and Barkley has had strong games against the Eagles during his young career.

In four games against Philadelphia, Barkley has 60 carries for 389 yards and three touchdowns. He’s also caught 22 passes for 166 yards and a touchdown. That translates to an average of 25.4 fantasy points per game in those four matchups. Barkley’s injuries over the last couple of seasons have made us forget his immense talent, but the Eagles are surely not forgetting how good he is.

Additionally, with offensive coordinator Jason Garrett now out of the building, Freddie Kitchens will run the offense. Kitchens has his flaws, but he should be smart enough to scheme up plays to get the ball into Barkley’s hands and keep Daniel Jones out of situations where he has to make risky plays.

Atlanta Falcons running back Patterson was unable to suit up last week against the New England Patriots, and the offense struggled immensely as a result. Now, he’s back, and he should be a vital piece of the offensive attack. Prior to the team’s game against the Dallas Cowboys, Patterson had 14 or more touches in four straight games, and he had double-digit touchdowns in every game since Week 2 before Week 10.

The Jaguars are not the easiest matchup of the week. They rank eleventh in fantasy points allowed to opposing running backs, but that doesn’t completely apply here with Patterson designated as a running back. Still, he can do more than other running backs as a wide receiver with his background. Patterson has at least one catch in every game this season, and he’s caught five or more passes in six of his nine games played.

Patterson is RB10 on the season, and he’s scored a total of seven touchdowns in nine games, including five of those being through the air. With wide receiver Calvin Ridley still away from the team as he gets into the right mental state, the offense will run through the tight end, Kyle Pitts and Patterson. He should see a good amount of work this week.

It’s tough to call for sitting the guy that has just two single-digit performances on the year in full PPR scoring, but that’s what we’re doing with Fournette of the Tampa Bay Buccaneers. Fournette remains the lead running back for the Bucs this season, and he’s seen at least 50 percent of the team’s snaps in all but two games this season while being the leading man in running back snaps in all but one game. So, why are we fading him against the Indianapolis Colts this week?

For one, it’s a road matchup with the Colts, who have been one of the better teams in the NFL over the last few weeks with four wins in their previous five games, including a 41-15 thumping on the road against the Buffalo Bills last week. The Colts have given up the second-fewest fantasy points to opposing running backs this season thanks to allowing just five total touchdowns to their opponents.

Fournette has seen double-digit touches in all but one game this season, but he remains a relatively inefficient runner on a weekly basis. He’s averaged less than four yards per carry in three of his last five games, and the Colts are allowing just 4.1 yards per tote to opposing backs. If Fournette cannot find the end zone, he could have his second single-digit fantasy week of the year.

We’re playing the odds on this one. Gaskin has been impossible to predict this year. He’ll have a good week and immediately follow it up with a bad week. Gaskin hasn’t had double-digit points in back-to-back weeks all season long, and he had 18.6 PPR points a week ago. Now, we fade Gaskin this week and watch him score 30 PPR points because that is the way this entire season has gone.

Another thing that will fly under the radar in this game is the addition of running back Phillip Lindsay, who was picked up this week after being released by the Houston Texans. He’s been on the team for less than a week, so he’ll likely not see a ton of involvement in the offense. However, he’ll likely see a few plays here and there as he is still a talented running back when given opportunities.

The final piece of this week that’s working against Gaskin is the matchup with the Carolina Panthers. The Panthers are third in the NFL this season in fantasy points allowed to opposing running backs. They’re tied for the top mark in the NFL with just 37 receptions allowed to opposing running backs, and they’ve let running backs find the end zone six total times. Between the lousy matchup and inconsistent play from Gaskin, he’s not a top recommendation this week.