The Cutback: Running Back Start/Sit Week 7

Week 7 is here, and the Dynasty Nerds writers are back once again to provide you with your weekly starts and sits, and we’re here to talk running backs. 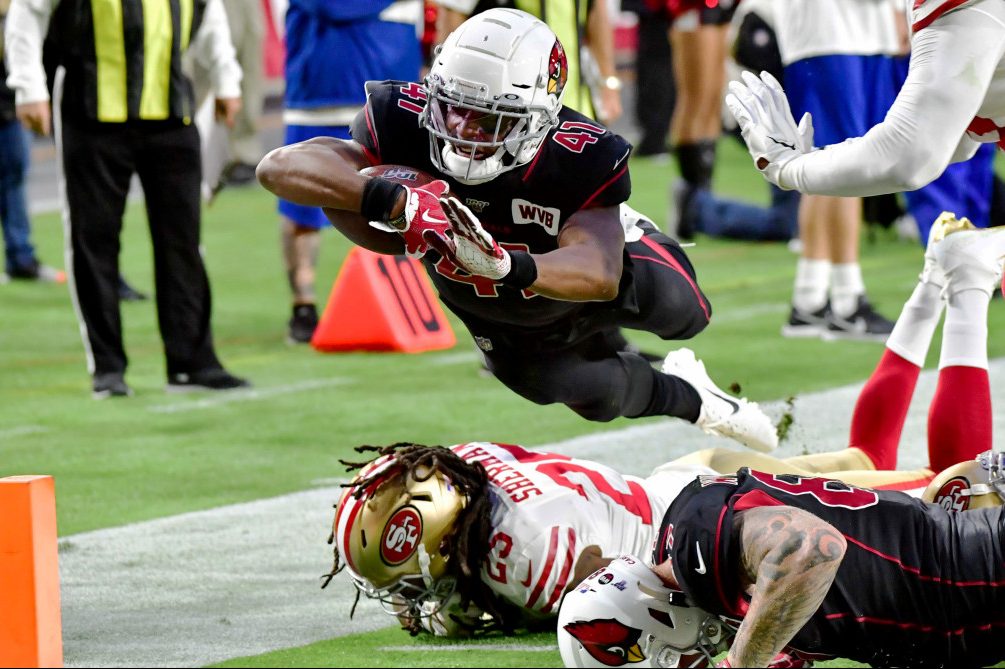 Welcome Back! Week 7 is here, and the DynastyNerds writers are back once again to provide you with your weekly starts and sits. We will be making our recommendations based on weekly consensus PPR rankings from FantasyPros. Here are the cast and the position groups they will be covering to help you win your week. Follow their socials, and be sure to check out their picks for this week as well.

I had my first flawless week with some pretty big hits thrown into the mix. After struggling for the first month of the season, Kenyan Drake ran wild on the Dallas Cowboys for two touchdowns. Even if you take away his long run for a score, he still would have been a top-eight player at the position. David Montgomery was inches away from a top six week. His volume remains steady, and so does he. My biggest call of the week was D’Andre Swift. The rookie was excellent against the Jacksonville Jaguars, and his role will continue to grow.

We got a little lucky with two out of our three misses, but I’d rather be lucky than good. Ingram exited early with an injury, and his stock continues to trend downward. Darrell Henderson dominated the touches, but he didn’t do a ton with them. His lack of receiving work doesn’t help his cause either. Melvin Gordon missed the week due to an illness, so we got a win there. It will be a case to watch moving forward.

This may be recency bias, but we’re going back to Drake. His RB2 performance was the type of play that you were hoping for when you drafted him in the first few rounds, and he hadn’t done that to start the year. In a terrific matchup against the Dallas Cowboys, he showed up in a big way. In Week 7, he has another great matchup against the Seattle Seahawks, who allow about 16 points per game to the running back position.

The major concern for Drake to this point in the season is the lack of work in the receiving game. He has just six receptions on eight targets for the year. Teammate Chase Edmonds has 19 receptions thus far, but Drake has out-touched him by 68, and he has nearly 130 snaps more than him thus far. Volume reigns supreme in fantasy, and Drake is getting the volume.

This Seahawks’ defense is beaten up at all three levels, and they’re giving up an average of 27.0 points per game to this point in the season. Arizona will be forced to score points, and Drake will be involved in the game plan. With byes and injuries, Drake should give you a pretty safe floor as an RB2 option this week.

Some of the shine of rookie running back Antonio Gibson has started to wear off, and a major reason for that has been the play of teammate J.D. McKissic. After Gibson started the year off as the lead back, McKissic has seen his snap counts consistently trending upwards, and he even out-snapped him during the team’s Week 6 loss to the New York Giants.

McKissic has seen at least 40 percent of the snaps in all six games, and he’s cleared the 50 percent mark in each of the last four. Meanwhile, Gibson has only cleared 50 percent of the snaps twice. In standard formats, McKissic still isn’t bringing you an overwhelming amount of value, but he’s bringing you safe production every week in PPR. Plus, he’s playing the Dallas Cowboys, who are allowing over 22 PPR points per game.

Looking at McKissic’s play, as long as he gets at least three receptions, he’s getting you at least 11 points in your lineup. That’s the type of play you’re looking for, and if he could get into the end zone, it would elevate the ceiling of his day tremendously. Dallas has allowed seven touchdowns to running backs this year on the ground, and McKissic could add to that total this week.

This one is similar to the logic that we used with McKissic. White doesn’t have a crazy high ceiling, but he does have a very safe floor. Outside of the two games, he has missed, White has picked up right where he left off last season by maintaining a stranglehold on the receiving work out of the backfield.

In all three games that he has played, he has caught at least three passes, and he’s averaging six per game, which is good enough for a 96-reception pace over the course of a full season. He’s not going to elevate your team to soaring heights, but he’s the type of player that can get you through a bye week while your studs are out.

The San Francisco 49ers haven’t been too kind to running backs this season, as they’re allowing just 12.9 fantasy points per game this year, but White’s role remains the most consistent in football. You can slot him into your lineups with a good amount of positivity this week.

For this one, I’m operating under the assumption that Miles Sanders will be inactive for the team’s game against the New York Giants. With Sanders out, Scott is the clear beneficiary to become the lead back. That’s great, but I wouldn’t be rushing to slot him into my fantasy lineups this week. After playing strong down the backstretch of 2019, he hasn’t been lighting it up through the first third of the season. 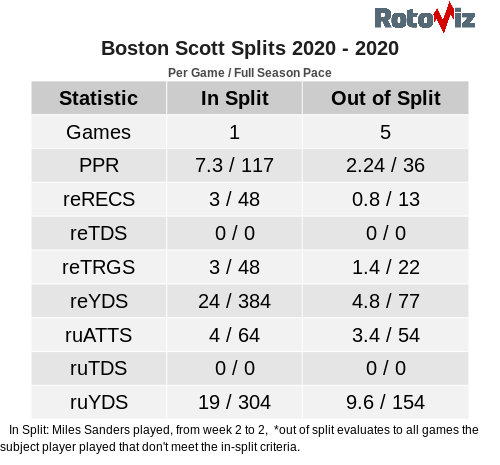 In the one game he has played without Sanders this season, he had just 7.3 PPR points, and his matchup has only gotten more difficult with all of their injuries. Three of the five starting offensive linemen entering the season are currently on Injured Reserve, and All-Pro offensive tackle Lane Johnson has been dealing with a nagging injury of his own.

The Giants have been somewhat generous in terms of fantasy points against, as they’re allowing 20.0 PPR points per game to the running back position. This Eagles’ running game has been reliant on big plays from Sanders the last couple of weeks, and Scott doesn’t bring that same level of athleticism. With byes and injuries, you may be forced to start Scott, but don’t count on him for a big day.

I’m downgrading McKinnon for a couple of reasons this week. For one, his matchup is brutal. The Patriots are allowing just 14.8 PPR points per game to running backs. For two, McKinnon needs to have a stranglehold on the touches to be valuable for fantasy, and that’s not a guarantee for him, even with Tevin Coleman expected to miss Week 7.

In the games where McKinnon had at least 10 rushing attempts, he averaged just short of 20 PPR points per game. That’s fantastic, but his efficiency is absolutely terrible to the point that they split his work with teammates Jeffrey Wilson Jr. and JaMycal Hasty. After Raheem Mostert left the team’s Week 6 win over the Los Angeles Rams, Hasty finished the game with more carry. He averaged a full yard per carry more than McKinnon did.

Between a bad matchup and a non-guarantee on his number of touches, McKinnon should absolutely remain on your bench this week. Unless you have no better option, you’re hoping for a touchdown, and that’s not even a guarantee. Head to the waiver wire and hope you can find someone better.

I’m taking two players from the same game for two of my sits this week. After lighting up the Cowboys in Week 5, Freeman got shut down in Week 6 against the Washington Football Team. He averaged just over 3.0 yards per carry, and quarterback Daniel Jones even led the team in rushing yards on the afternoon. In Week 7, he has a matchup with the Eagles, who have the defensive front to give him troubles again.

The Eagles rank 12th in the NFL in fantasy points allowed to running backs, and that’s the lone area of their defense that has been playing good football with the secondary still struggling mightily to slow down opposing receivers. This front with Brandon Graham and Fletcher Cox can penetrate into the backfield and slow down running backs before they can get a head of steam going.

I always say that volume is king, and Freeman is getting the volume on this roster since joining the team. However, he’s been reliant on touchdowns for fantasy points. He’s scored one rushing touchdown since he’s been back, and, in the three other games, he’s averaging barely over six fantasy points per game. The Eagles have allowed six touchdowns on the ground, but I think they can dominate this matchup in the trenches en route to a successful day.

Next Man Up: Regular Season Week 7
Changing the Call: Week 7