Week 8 is here, and @GBridgfordNFL is back to provide you with your weekly starts and sits, and we’re here to talk running backs. 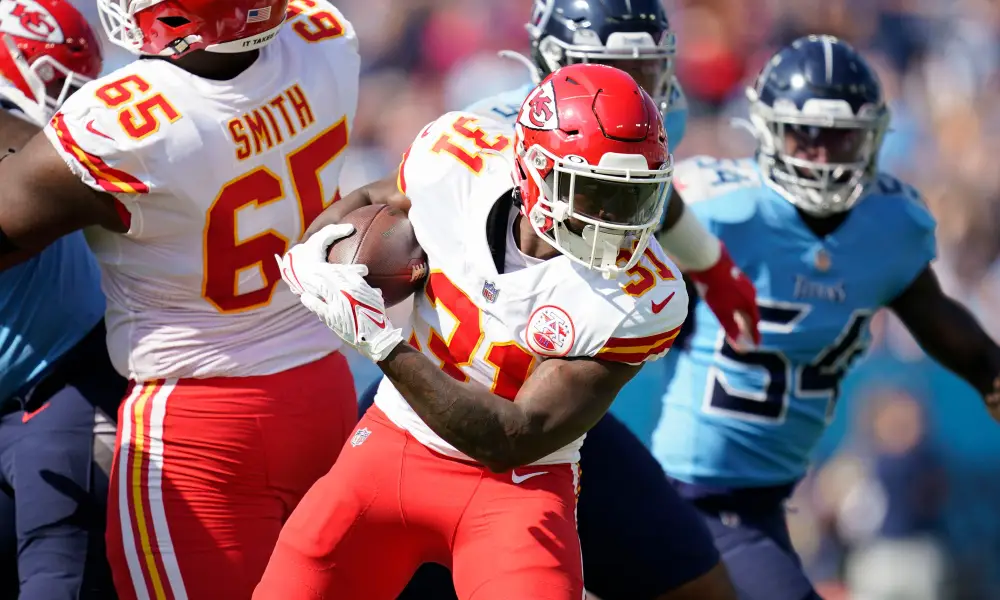 Well, that was a rough week. Edmonds got the majority of the carries and all three of the running back receiving targets for Arizona, but he didn’t find the end zone in a week that many did.

Damien Harris was the lone hit of the week. He found the end zone twice this week, and he went over the 100-yard mark for the second week in a row.

McKissic out-snapped Antonio Gibson in week seven; still, Gibson doubled his touches with 16 total compared to eight. Despite trailing for much of the game, Washington wasn’t throwing to McKissic.

The Panthers had been great against the run all season, and they only allowed Booker to average 3.6 yards per carry. However, the one variable I failed to factor in was Sam Darnold forgetting how to play football.

He gave the Giants plenty of chances to score points, which is how Booker made it into the miss column.

The process was sound, and if you had shown me the final score of 38-3 between the Bears and the Bucs, I would have assumed Herbert had a terrible day. Nope, he had five catches for 33 yards to go with 100 rushing yards. This season makes no sense! I give up on trying to make it make sense!

Teammate RB Miles Sanders is out, and it’s the Kenneth Gainwell show with the Philadelphia Eagles. The rookie running back has been a thorn in the side of Sanders’ fantasy managers all season, but there will be no guesswork involved this week.

Following Sanders’ injury a week ago, Gainwell played over 40 percent of the snaps for the first time all season as he finished up with 51 percent of the team’s offensive snaps.

Fellow Eagles RB Boston Scott will likely take on some of the rushing work, but Gainwell will be firmly locked into the receiving role on this roster which is hugely valuable for PPR.

Gainwell’s a player that was available on many waivers, and if you got him, you are likely starting him this week due to injuries. It helps that he has an outstanding matchup.

The Detroit Lions have allowed the fourth-most fantasy points to opposing running backs this year, thanks in large part to the 12 total touchdowns they’ve allowed to the position.

Six of those touchdowns came through the air. Gainwell has a great chance to bring solid value this week.

The Kansas City Chiefs are 3-4 on the season, and they need a win this week to keep pace in a competitive AFC race. If the playoffs started today, they would be on the outside looking in.

Thankfully, they draw a beat-up New York Giants squad at home, which is excellent for RB Darrel Williams.

The Giants have given up the seventh-most fantasy points to opposing running backs thanks to the fourth-most rushing yards allowed. Since Clyde Edwards-Helaire was injured, Williams has played 72 and 64 percent of the snaps in the two games.

No other running back has played more than 31 percent, and those snaps came in the blowout loss to the Tennessee Titans last week.

In week six, a game the Chiefs won handily, Williams had 24 of the 28 running back touches. When they’re in games, they lean on whoever their primary running back is rather than rotating in multiple backs.

Last week was just the first game all season the Giants had held an opponent under 17 points. So far, they’ve given up 21 or more points in five out of seven games.

The Chiefs have to leave with a win, and Williams will be a featured part of the offense as a result. If you have Williams on your roster, you have to get him into your lineups.

This is another one of those gut-call plays that I’ll probably look stupid for by Sunday night. RB Leonard Fournette has at least 16.9 PPR points in each of his last four games; he’s gone for double-digit fantasy points in six out of seven games this season.

So, why are we sitting Fournette this week, considering that he has beaten bad matchups throughout the year? It’s one of those weeks for the Bucs offense where Brady throws the ball a million times.

They’re giving up an average of 55 yards to all opposing running back units. If you take away their running game with the Bucs, they have no problem throwing the football.

Fournette has seen at least three targets in every game this season, and he’s seen four or more in all but one game. Despite that, I’m fading him this week.

The Bucs’ defense will likely contain the Saints and allow the offense just to run the ball, but I have one of those feelings that Fournette has a down week. The matchup isn’t great, and he’s been outperforming expectations all season.

The Chiefs have a terrible run defense, and the Giants will want to take advantage of that to keep QB Patrick Mahomes on the sideline, right?

Well, they would like to, but RB Devontae Booker isn’t the guy able to do that. Booker is averaging 3.2 yards per carry this season, and, in three games as the primary running back, he has yet to average over 3.6 yards per carry.

He isn’t a hyper-efficient running back, and he has relied on touchdowns this year, with 18 of 52.9 PPR points coming from touchdowns.

Booker needed all four quarters of a blowout win over the Carolina Panthers last week to get to just 51 rushing yards on the day, and he hadn’t gotten over 42 yards in a game this season before last week.

Last week was just the 11th game in his career where he had run for over 50 rushing yards in a game. For context, he’s played in 87 career games.

One way you can take advantage of this Chiefs defense with your running backs is through the air, but that’s not the way that Booker does his damage.

The Chiefs have given up the eighth-most receptions to opposing running backs, but Booker hasn’t been an elite receiving back. In 87 career games, he’s caught more than three passes just 11 times, and, even though they were without several pass-catchers a week ago, Booker caught just two balls.

The Chiefs will likely run up the score early, and Booker’s role in the offense will be dramatically altered.