@_jasonstein applies investment & valuation concepts to Fantasy Football. In Vol. 10, we discuss how to trade using IFFI, some new top picks, and much more. 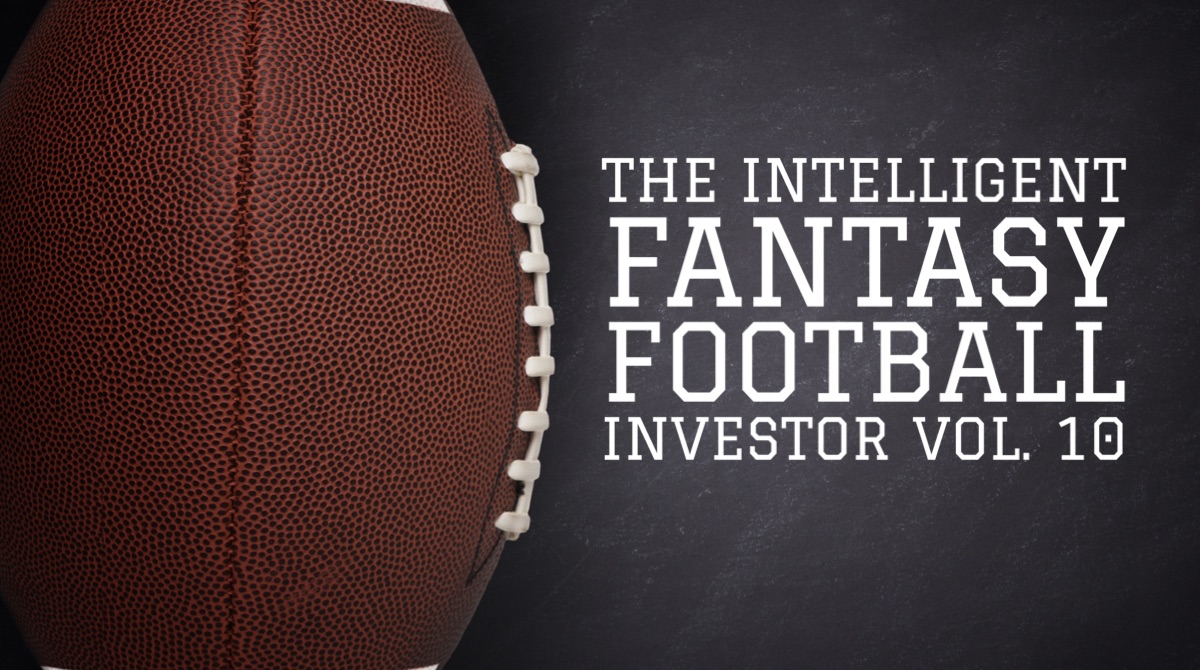 This series builds off each volume, so if you haven’t read The Intelligent Fantasy Football Investor (IFFI) Volumes 1-9 yet, please stop and read them on Dynasty Nerds [Link]. This series aims to bring investment concepts and a different thought process to the fantasy football community.

The premise is that we should value fantasy players based on the relationship between a player’s price and his earnings. Or his P/E ratio. Price is a player’s KeepTradeCut (KTC) number. KTC = Price. Fantasy per-game (PPG) points are a player’s earnings. So, putting it all together: P/E = KTC / PPG (note: divided by 10 for simplicity). When comparing similar assets (like for like), the lower the P/E, the more value you get from that player. The best way to use P/E is to look at clusters w/in each position group for value.

Before we get into the IFFI update, I’d like to talk about how I use the IFFI process to trade.

This is how I trade using IFFI

The first step, make sure the trade balances on keeptradecut.com’s trade calculator. The critical part here is both the buyer and seller are paying current market prices. It doesn’t matter what your perspectives are on players; if it doesn’t balance from a KTC perspective, then both sides aren’t considering current market sentiment.

Here is where I try to benefit. I want to buy guys that are undervalued and sell guys that are overvalued relative to their current KTC. I use the IFFI process to find mispricings in current KTC levels. So the deal gets done at current prices, but hidden in the deal is the potential to add KTC to your side of the trade because, presumably, you are buying guys where their KTC will appreciate and selling guys where their KC will depreciate.

Let’s look at an example

Here is a trade offer that a fantasy player asked me to evaluate a couple of weeks ago: Gabe Davis + 2023 3rd = Chase Edmonds + Christian Kirk. I will walk you through how I thought about this trade and then update you on how it looks now.

First, it balances on KTC (reminder, this was a few weeks ago). KTC says Fair Trade.

Let’s take a look at where we are now, two weeks later:

So from a WR perspective, the trade worked perfectly. But in total, the exchange only added ~260 KTC, not perfect, but helpful. The miss was thinking that Chase Edmonds was reasonably valued and writing him off as not having much impact on the trade. But that’s hindsight, and we would have never made the trade without Edmonds because it would violate rule one, which is always to ensure the trade balances from a KTC perspective. The better call would have been to go Gabe Davis = Christian Kirk + 2023 Mid 3rd and leave Edmonds out of the deal.

I’m looking at this as a win because we added KTC. Another way to think about it is if you were to reverse the trade right now, you would have to add another piece to the Davis side, which, if nothing else, would make you better off by a piece than if you had done nothing. Oh yeah, one other thing, I still think Davis is overvalued, and his price will depreciate; it’s just that it hasn’t been recognized yet. If Davis’ price goes to where I think it could, that would add even more KTC to the 260 favorable results.

To sum up, make sure the trade at least balances from a KTC perspective. Buy undervalued players and Sell overvalued players, which adds future KTC to your side of the equation. And finally, I haven’t talked about this yet, but keep in mind that picks are appreciating assets, so if you give away draft picks, that’s a loss of future KTC and vice versa.

In my opinion, Kyler belongs in that top tier of QBs, but he trades at about a 3000 KTC discount to the rest of his peers. Admittedly the situation in Arizona could be better. The Cardinals’ offensive game plan could be more inspired, and they are playing without their best receiving threat in DeAndre Hopkins, who should be back in a few weeks after his suspension. This is precisely the type of situation you look for using the IFFI model, a top-tier player that scores a ton of points but is way out of whack regarding KTC, so you get him for a bargain. As my five-year-old daughter says, “Easy peasy, lemon squeeze.” I see 22% upside from current levels, and he’s a top Buy.

Tale as old as time, DJ Moore looks undervalued for another year. I always figured Moore was pretty good but hampered by poor QB play during his NFL career. Unfortunately, this year might be another year of poor QB play on a struggling Panthers offense. But this IFFI process is from a dynasty perspective, and the hope is that DJ gets utilized like I think he can be at some point. For now, you are buying a good WR at a reasonable price. I see 21% upside from current levels, and he’s a top Buy.

My first repeat. Robinson was a Buy in July; then in August, I closed the trade for a 13% gain in KTC. Given his injury to start the season, Wan’Dale’s KTC has drifted back down to 2500, right where he was last time I had a Buy on him. So let’s roll the trade out again. Hopefully, Robinson will be back from his injury in week four or five, and with minimal top-level talent ahead of him, look for him to start producing immediately. I see a 28% upside from current levels, and he’s a top Buy.

Bell was a solid prospect coming out of college. He has excellent measurables in terms of height/weight/BMI. Bell produced very well in college, including breaking out early (18 years old) and being an early declaration to the draft. He has good draft capital, as he was selected in the third round by the Cleveland Browns. The only area he missed was athleticism, as he didn’t test as fast and athletic as expected during the NFL draft evaluation phase. Not a death sentence in my book. I think the Brown’s offense could look very different at the end of the season with Watson coming back from suspension, and I think Bell could be a significant beneficiary of those changes. I see 20% upside from current levels, and he’s a top Buy.

No downgrades from Buy to Hold today as those were taken care of between volumes. See the track record discussion below.

No upgrades from Sell to Hold today as those were taken care of between volumes. See the track record discussion below.

James Robinson is a tough sell because I like him and think he’s pretty good. His upside is limited as he shares the backfield with Travis Etienne and will for a while. It’s just that he’s currently trading at similar KTC prices as Derrick Henry, Alvin Kamara, Aaron Jones, Dalvin Cook, Leonard Fournette, and many others. To me, that seems a little out of whack. That’s a reluctant Sell for James Robinson. And remember, this is dynasty, not re-draft fantasy football. I see 11% downside from current levels, and he’s now a top Sell.

Here are some players I think have valuation downside but weren’t added to the Top Sells list for whatever reason: James Cook, Mike Williams, & Dawson Knox.

So far, I’ve closed out 28 trades, and 21 of those 28 worked, a ~75% hit rate. Not bad. Looking at the last column, you can see how much KTC was gained or lost by each closed transaction and add it together; it totals ~8,500 KTC of added performance. Not bad at all. That’s the goal here; making you KTC.

Down the rabbit hole

I’ve done nine volumes on P/E so far. Ten if you include this volume. Sometimes you must try new things and experiment with new ideas, not knowing where they will lead you. And this past month, I went down the rabbit hole, looking at a few new concepts. As a side note, I laugh every time I type rabbit hole because I currently have a pesky rabbit that keeps digging a hole under our front porch, and we just can’t entice him to leave. Anyway, of the many ideas explored, here are some new ideas I felt were worth sharing: the Price-to-Sales ratio (P/S) and incremental margins. I’m talking about them here because I think they are fun ideas worth checking out, but they are definitely at the early stages of development so take that for what it’s worth.

That’s it! So excited I made it to double digits volumes in the IFFI series. Thank you for continuing to read. We’re starting to see some real value added; let’s keep it going. Today we talked about how I use the IFFI process to think about trading. We closed out a few favorable trades and added a couple of new Buys and Sells to the top picks lists. And finally, I introduced some new topics in the P/S ratio and incremental margins to think about for the future.