@_jasonstein applies investment & valuation concepts to Fantasy Football. In Vol. 11, we discuss my track record, a transition to a hybrid FPPG model, some new top picks, and much more. 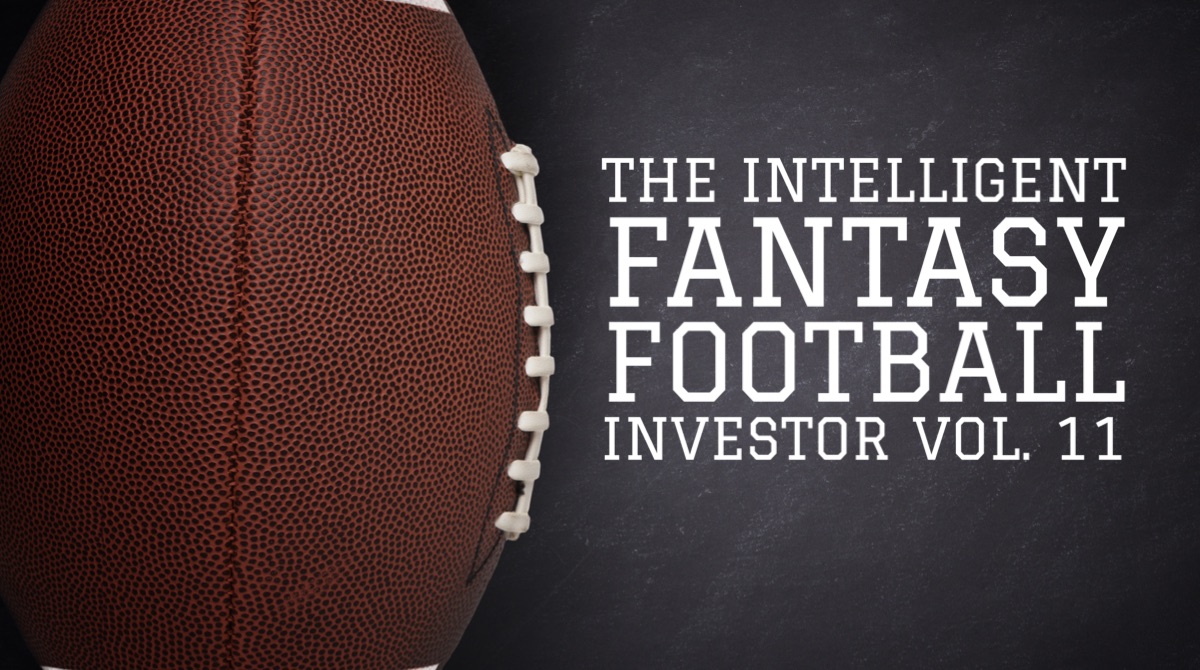 This series builds off each volume, so if you still need to read The Intelligent Fantasy Football Investor (IFFI) Volumes 1-10, please stop and read them HERE. This series aims to bring investment concepts and a different thought process to the fantasy football community.

The premise is that we should value fantasy players based on the relationship between a player’s price and his earnings. Or his P/E ratio. Price is a player’s KeepTradeCut (KTC) number. KTC = price. Fantasy per-game (PPG) points are a player’s earnings. So, putting it all together: P/E = KTC / PPG (note: divided by 10 for simplicity). When comparing similar assets (like for like), the lower the P/E, the more value you get from that player. The best way to use P/E is to look at clusters w/in each position group for value.

Hey everyone, it feels like forever since Vol. 10 came out. We are now halfway through the NFL season and more than halfway through the fantasy season. In this Vol. 11, we will touch on my track record, transition to a hybrid form of FPPG, and go through my current top picks (including some new upgrades/downgrades).

I got feedback that I don’t tout my wins as much as I want to talk about my losses. And I suppose that’s true, but that’s my nature. In the stock market, the goal is to accumulate money, and the IFFI process’s overarching goal is to accumulate KTC. So here we are, starting with my biggest win so far, my track record. Please look at this chart that goes through each of my closed trades.

So far, I’ve closed out 34 trades, and 27 of those 34 worked, a ~79% hit rate. Not bad. Looking at the last column, you can see how much KTC was gained or lost by each closed transaction and add it together; it totals ~13,000 KTC of added performance. Not bad at all.

If you convert that KTC to draft picks, ~13,000 KTC is the equivalent of two 2023 mid-1sts plus a 2023 late 2nd. Even if you include my recommendations that have yet to be closed (still outstanding, current Buys/Sells, waiting for performance), the added value would be approximately a 2023 early 1st. This is all abstract because, of course, you can’t actually execute every recommendation, or if you could, the timing will line up differently. Still, directionally if you are following the process, you are making KTC along the way.

We have so much more information than we did a month ago, let alone what we knew a few months before the season started. The biggest thing about the IFFI process is that we now have a better idea of a player’s earnings/FPPG. That’s pretty important because the IFFI process is all about how a player’s FPPG relates to his KTC price.

FPPG from projected to hybrid

So as a reminder, we have been through changes in the model from an FPPG perspective. In vol. 1, back in February, we were using the 2021 actual FPPG. Then, in the middle of the offseason, we switched over to the projected 2022 FPPG. We had to wait for the experts to get out their projections. That was our best estimate for each player’s actual 2022 FPPG. Now we have an actual 2022 FPPG. It’s not the player’s full-year actual FPPG, but we have an excellent indication of what those full-year numbers will look like given what they have done through nine fantasy weeks.

So here’s what I’ve done for the IFFI model. I’m updating each player’s FPPG after each week and plugging that into the model. As you can imagine, that changes things compared to what we expected each player to do from an FPPG perspective. So, I compare each player’s projected 22 FPPG to their actual 22 FPPG through week nine and use whichever one is higher. This is a hybrid approach that gives everyone the benefit of the doubt. For those guys off to a hot start with actual PPG higher than projected, I’ll use your actual FPPG and give them credit for that continuing. For those off to slower starts, I’ll give them the benefit of the doubt that things will get better and they can get to at least where the experts were projecting at the start. So everyone wins. Of course, once we have an entire season in, I’ll have to move to 2022 actual, not hybrid. And the cycle will start all over again.

With this change to a hybrid FPPG model comes changes in the outputs. Players’ P/Es are going to look a little different. So, I want to discuss how this update affects the players I recommend buying or selling. And the most significant change will be a revision to my target price for some of them. However, I’m not changing their ratings or where their KTC was when I first made the recommendation, just a marking-to-market exercise. This update gives a fairer/more up-to-date representation of the upside/downside.

I am doing nothing more than revising my price target for the updated FPPG info here. They all maintain their Buy/Sell recommendations. And most importantly, when it comes time to calculate KTC added, I’ll be figuring that vs. what the original recommendation was. Not the revised numbers so that the track record will be very accurate. I just recognized some of those losses earlier because we have new information.

I’m excited about this one; this is one of those stars aligning type situations. AJ Brown is really good, and he has KTC upside. It’s not that AJ Brown is necessarily cheap; he’s WR3 on KTC already. And he shouldn’t be worth as much as Justin Jefferson or Ja’Marr Chase. The discount to Jefferson/Chase should be smaller. I see about 14% upside from here.

St. Brown (ARSB) returns to my Top Picks list for the second time. We know that Amon-Ra can score points. And he continues to score many points. His situation may also be changing in the near term and long term. The Lions agreed to trade TJ Hockenson at the NFL trade deadline to the Vikings. Hockenson commanded an 18% target share, and now he’s on a new team. This means more work for ARSB is coming. Also, the Lions’ 2022 1st round pick, Jameson Williams, will be back at some point, even though his return was delayed. Still, when Jameson starts contributing, it is good for ARSB because these two WRs should complement each other well and improve the team’s passing game (i.e., everyone eats more). And lastly, the Lions are playing poorly enough that they may be in line for the 1st or 2nd pick in next year’s NFL draft, which means they could be in store for a quarterback upgrade next year, which should help ARSB out in the long-term. I see a ~17% upside to his KTC.

Many talented weapons play for the 49ers right now; you have Deebo Samuel, George Kittle, and new addition Christian McCaffery. The forgotten guy may be wide receiver Brandon Aiyuk. Aiyuk has been pretty good since he entered the league, except when he was in the head coach’s ‘dog house.’ But that’s old news now, and Aiyuk is getting a 22% target share, >2 yards per round run, and 29% of the team’s air yards. And although Deebo, CMC, & Kittle will all be useful, Aiyuk does something different than all of them and has enough of a role in this offense to keep scoring mucho fantasy points. I see a ~15% upside to his KTC.

No downgrades from Buy to Hold today, as those were taken care of between volumes. See the Twitter upgrades/downgrades section.

No upgrades from Sell to Hold today, as those were taken care of between volumes. See the Twitter upgrades/downgrades section.

Well, Kenny Pickett was an NFL 1st round pick, and well, he is starting early in his career; usually, things that signal he might be good. I’m on the fence. I didn’t have him rated very high in my prospect model coming out, so my default here is going to be to sell when his price gets a little too high. What I really want to do is reshoot; if I get the opportunity to trade Pickett for a chance at a better quarterback prospect, I take it. I see a ~22% downside to his KTC.

A lot of discussion about who is better, Khalil Herbert, the pre-season back-up, or David Montgomery, the starter at the beginning of the season. We are pouring over all the running back advanced stats to find the edge, to see which is the better one to roster. And yeah, I get it; it’s a worthwhile exercise. But honestly, it doesn’t matter all that much. Sure, if Montgomery is injured, Herbert is useful and startable; however, if Montgomery isn’t injured, they split the backfield, and his upside is capped.

Two things to mention here; first, running backs are replaceable; if Montgomery moves on at some point, the Bears will likely bring another running back to complement Herbert. Second, nobody wins in a true committee backfield for fantasy purposes, which is part (just part) of the reason why I was lower on guys like Nick Chubb and AJ Dillon. I see a ~13% downside to his KTC.

The issue I have with Pat (Muth) is more about the tight end position than Muth himself. Pat will be a mid to late TE1 consistently throughout this entire year. From that perspective, having him on your squad is nice because you don’t have to make decisions; you start him every week. The problem is that production, those FPPGs, are replaceable by streaming tight ends off the waiver wire. So, why hold onto a tight end at a high KTC, whose production is mainly replaceable for free? You might as well Sell Muth, try and upgrade to a true differentiator at the tight end position or use the value to get yourself some picks or better opportunities at the RB/WR position. I see a ~11% downside to his KTC.

Knox only has a 10.4% target share, 14% targets per route run, & <1 yards per route per route run. Not very inspiring. He does play with the remarkable Josh Allen on the dynamic Bills offense. But he doesn’t command enough of the Bills’ offense to matter. Historically, Knox has been a guy that has relied on scoring touchdowns for fantasy production, which can be highly variable, and something you’d like to try and avoid in fantasy. Knox is easily replaceable and relatively inconsistent but gets a good price because he is exposed to the outstanding Bills’ offense; that’s an easy sell for me. I see a ~13% downside to his KTC.

That’s it! Volume 11 was another transition volume. We transition from projected 2022 FFPG to a hybrid model combining projected and actual 2022 FPPG. With that came a transition in the IFFI model that brought on some new changes. We updated some price targets of players we were recommending and made new Top Pick recommendations. Also, we discussed the IFFI track record and gave some example trade ideas. I hope this volume has been helpful, and thanks for reading!