@_jasonstein applies investment & valuation concepts to Fantasy Football. In Vol. 9, we close some trades, initiate new top picks, & discuss some lessons learned from investing in the stock market that apply to fantasy football. 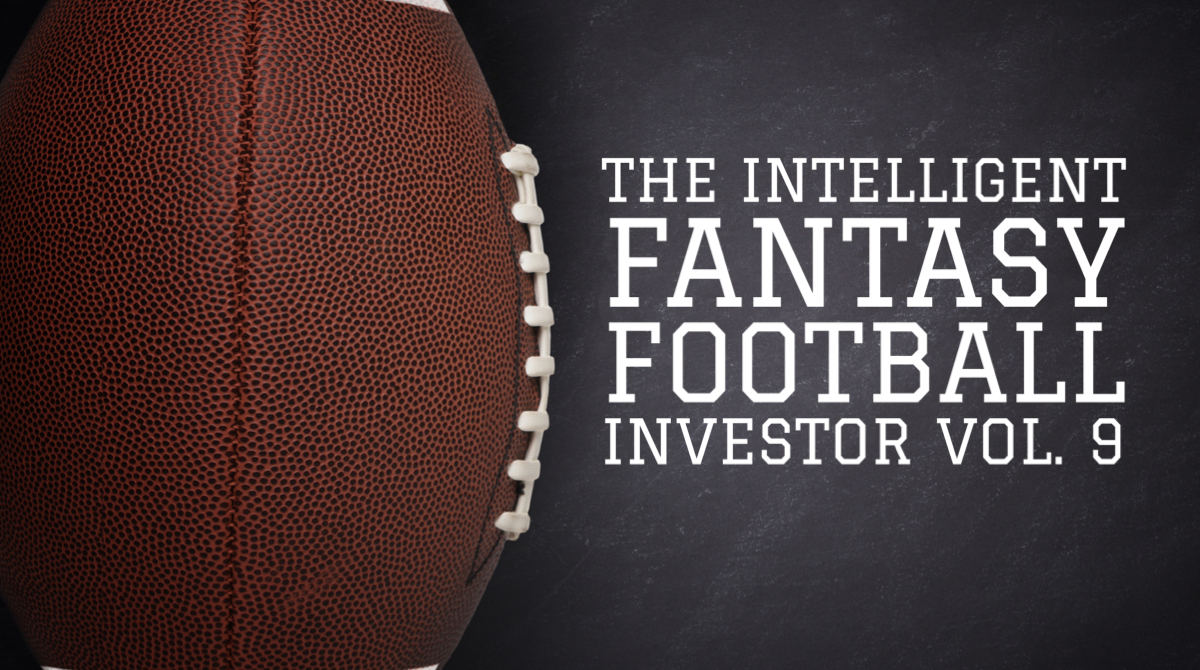 This series builds off each volume, so if you haven’t read The Intelligent Fantasy Football Investor (IFFI) Volumes 1-8 yet, please stop and read them on Dynasty Nerds [Link]. This series aims to bring investment concepts and a different thought process to the fantasy football community.

The premise is that we should value fantasy players based on the relationship between a player’s price and his earnings. Or his P/E ratio. Price is a player’s KeepTradeCut (KTC) number. KTC = Price. Fantasy per-game (PPG) points are a player’s earnings. So, putting it all together: P/E = KTC / PPG (note: divided by 10 for simplicity). When comparing similar assets (like for like), the lower the P/E, the more value you get from that player. The best way to use P/E is to look at clusters w/in each position group for value.

We’re here; we made it! The 2022 NFL season is officially underway. I couldn’t be more excited. Fantasy points are critical to the P/E valuation model; they’re a player’s earnings. And each player will get a chance to put up 17 earnings reports this season, assuming they stay healthy. I, for one, can’t wait.

I’ve made a few upgrades/downgrades on Twitter since Vol. 8 was published, and I wanted to share a brief update on those changes. On 8/18/22, I downgraded from Buy to Hold: Trey Lance and Wan’Dale Robinson. And on 9/2/22, I upgraded from Sell to Hold: Dawson Knox. All of these trades worked out well for my track record; more on that below.

I’m excited about this upgrade. I usually just let the numbers speak for themselves, but this is one of those unique situations where you love the player, and the numbers also match up. I think Barkley has a 17% upside in KTC from current levels. If Barkley can stay healthy, I think he can trade up to the likes of where Javonte Williams and D’Andre Swift currently trade. Barkley is one of the best RB prospects we’ve seen in a long time, and if he stays healthy, you are getting an absolute stud on the cheap.

I’m downgrading Rashaad Penny from Buy to Hold. I’m locking in an 8% favorable performance on the Penny trade and adding ~200 KTC to the coffers. See the track record discussion below.

Herbert to Sell is because you all have pushed his KTC price to the tippy top. You made me do it. As of 9/9/22, he’s trading at a KTC of 9949, the second highest-priced player, right below the likes of Josh Allen (9999). This is fine, Herbert is a young budding superstar, but the problem is his 2022 projected PPG is not differentiated enough to warrant the premium.

Sticking with Josh Allen as a comparison, although I’m not sure that’s fair given that Allen has a much better rushing upside, Herbert is projected to score ~21 PPG, and Allen is projected at ~23.5 PPG. Allen has a P/E ratio of 42x, and Herbert sits at 48x. So, as hard as it is to believe, Allen looks cheaper than Herbert at the moment. Remember, the lower the P/E, the more value you are getting. The lower the P/E, the more points you’re getting per KTC. Don’t get me wrong, I like Herbert, but I think he is a Sell at these prices.

Jones had an excellent rookie season. He beat Cam Newton for the starting job and then led the Patriots to a 10-7 record. There is something to be said about a QB that wins football games. He outperformed his rookie peers from a fantasy perspective, putting up 13 PPG in 2021. However, all that being said, his 2022 PPG projections are at ~15 PPG, and his fellow second-year peers are projected at least one PPG more for the 2022 season.

This takes us to the discussion of what is a good QB vs. what is a good fantasy QB. It looks like Jones may be a good NFL QB but may never be a highly desired fantasy QB. Mainly because there is limited upside on rushing. He’ll probably be an NFL starter for a long time but only be projected for 15-17 PPG for his career. Thus it’s hard to see Jones getting into the elite fantasy QB range like some of his peers could potentially reach. That’s a Sell for me.

It happens every year. We all go crazy for a rookie that the NFL doesn’t value highly (given his NFL draft position) because of the player’s/team’s situation. This year that mantel is held by none other than Pierce. He was a fourth-round selection by the Houston Texans in this year’s draft. Pierce was named the starting RB for Houston before the season kicked off. A great accomplishment for a rookie to be named a starter; however, there wasn’t much competition at the position. All signs point to Pierce being the feature back, with Rex Burkhead working more as a pass-catching back.

There is a long history of data on the matter that I won’t bore you with, but generally, RBs drafted below the third round in the NFL have low success rates. Sure, there are outliers, and Pierce may be an outlier, but I generally try to stick with the data and not bet on the outlier. Even if Pierce has a good season, which I’d somewhat expect at this point, I’d always be fearful that the next season he will be replaced by a player with a better profile. All this to say, Pierce is an easy fade for me from a dynasty perspective and a Sell in my P/E model.

And finally, I’m downgrading Davis to Sell. I don’t think you could open the ole’ bird app this off-season and not hear something (positive/negative) about Davis. I’m not sure I quite understand all the hype myself. He averaged eight PPG in 2021 and is projected to earn twelve PPG in 2022. He did have one fantastic game in the playoffs last year, with four receptions for 201 yards and four TDs. But I’m not sure you can take that one performance and project it out for an entire season. The consensus isn’t; his projected PPG is only at 12.

However, his KTC price tag reflects a player that scores more than 12 PPG. His P/E is currently at 36x, which is higher than guys I’d compare to him (from a fantasy perspective), like Darnell Mooney or Hunter Renfrow. He even trades within 100 KTC of guys like Mike Evans, who are projected to earn a full three PPG more than Davis in 2022. Stop the madness. Sell.

We already got to see one earnings report on Davis as the Bills opened up the season against the Rams last Thursday, and Davis went four receptions on five targets for eighty-eight yards and a touchdown. I’d point out that he only achieved five targets on thirty-one pass attempts for a ~16% target share. Sure he made the best out of every one of those targets, but for Davis to consistently put up the PPG, he needs to justify his KTC price; he’ll need to get that target share well above 20%.

Here are some players I think have valuation downside but weren’t added to the Top Sells list for whatever reason: Dalvin Cook, Jameson Williams, Mike Williams, and Alec Pierce.

So far, I’ve closed out 20 trades, and 13 of those 20 worked, a ~65% hit rate. Not bad. Looking at the last column, you can see how much KTC was gained or lost by each closed transaction and add it together; it totals ~3,500 KTC of added performance. Not bad at all. That’s the goal here; making you KTC.

This is a separate section from the IFFI model update, so think of this as section two. I try to balance discussing the P/E model and investing concepts and lessons. Occasionally, I jot down some of the lessons I’ve learned in my career, and here are some of the ones I think are relevant for fantasy football managers.

Get comfortable with uncertainty; there is no way to know everything; use probability outcomes, but don’t get stuck with indecision because you don’t have certainty.

The hardest part about being a contrarian is time. You can get the investment thesis right but miss the timing. If you miss the timing, you are wrong even though you may prove right in the future. Pay attention to timing.

The job is never done. It’s not like a typical job; you get an assignment, turn in your work, and it’s done. Investing is never ending; there is always new information to analyze and angles to look at, and the grind continues the next day.

Rarely does “this time it’s different” work. It’s one of my favorite stories to hear, and admittedly sometimes I buy in. But for the most part, go with the data and historical probabilities. It’s rarely different this time.

Take responsibility. Be quick to admit when you are wrong. You will most likely be wrong often, and how you deal with and learn from those failures makes you and your process better in the future.

Emotional stability is critical. Try not to overreact to the whims of the market. Trust your process and take advantage of the euphoria and panic in the market.

That’s it! Another volume down. We’re starting to see real progress with the model and some added value. We closed out a few favorable trades and added a couple of new Buys and Sells to the top picks lists. And now we will start seeing some actual games played, hopefully acting as catalysts to my recommendations. In section two, we talked about some lessons I learned, not an exhaustive list, but some important ones that I think could be useful to fantasy football managers.