The Long and Winding Rebuild

A story of one Dynasty Nerds writer’s journey to try to bring a floundering team back from the dead. 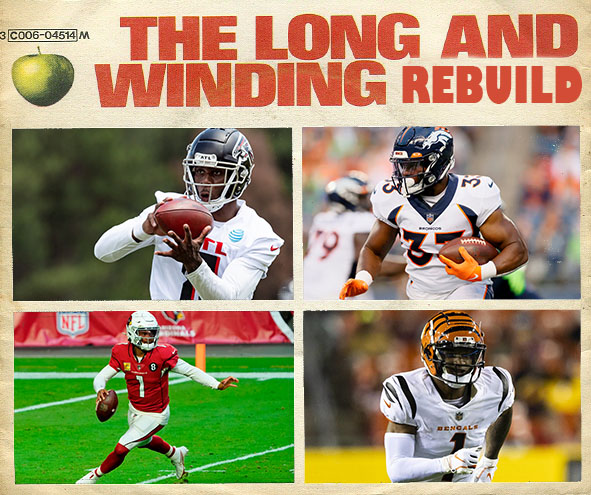 A rebuild can be a tricky puzzle. But sometimes, the hardest decision is deciding to tear down your team at all.

When the fall of 2019 rolled around, I thought I was in great shape: great running backs, an MVP-caliber QB, and some interesting prospects at receiver. I even started the year 2-1, squeaking by Week 1 with a 0.22 margin of victory and dominating Week 3.

But then the skid started. I would lose six straight games before finally getting in the win column again. And during the skid, I could tell it was over. My team needed change. I could never compete with the top-tier teams in my league.

This is my rebuild story.

Where It Began, I Can’t Begin to Knowing

It is always fun to go back and look at teams you thought were going to be great. You look at players you believed in and are stunned that you actually thought your team had a chance.

It is not all bad. I started the year with Saquon Barkley and Nick Chubb at running back. Of course, I thought I also had something good in Sony Michel.

Cam Newton was my QB. I was confident in his ability to rack up the points with a mix of passing and rushing.

Mike Evans was my WR1. I thought having him on top and peppering in a mix of Julian Edelman, Marvin Jones, Sammy Watkins, Larry Fitzgerald, and Anthony Miller would get me by. Yes, you have hindsight too. You can see how this ends.

I realized pretty early that the WRs were going to be a problem. After Sammy Watkins had an enormous week one (198 yards and 3 TDs), I packaged him with Nick Chubb and acquired Davante Adams and a 2021 second-rounder.

I still feel good about this trade from a value perspective, but it didn’t change my fate. I was robbing Peter to pay Paul. By strengthening WR, I left myself with Sony Michel as my RB2.

So, I made up my mind. The prospects I had weren’t looking great. The top talent I had was paired with absolute garbage. And I had traded future picks before 2019 to get the roster I had.

It was time for a fire sale. I didn’t hide it. I was open for business. I even renamed my team “OMG, WE’RE HAVING A FIRE…sale” and got busy starting trade talks.

One of the aspects of my rebuild that I made sure of was that I was going all-in. No half-measures. I fully planned on having a horrific 2020 season because of the amount of tearing down I would do. I hoped that I could trade off anything and everything that had talent on my roster. I was even open to moving young players if I was getting more value in return than I thought they were worth.

I think this is very important. When truly rebuilding, you should be ready to lose. You should want to acquire as many draft assets and prospects that you can in every single deal. You should want your team to be so bad that your optimum lineup is still putrid.

This is where I started.

In a matter of two days, I moved my entire starting receiver core to bring in three young WRs in Deebo, McLaurin, and Curtis Samuel. I also acquired three first-round picks, two seconds, and a third.

The rest of the 2019 season included many trades of lower talent for third-round picks—moving guys like Latavius Murray and Delanie Walker for thirds. I depleted most of my talent. I only had one big piece left, and it took me a while to commit to moving him.

After finishing 4-9 in 2019, I didn’t have many interesting trade chips left on my squad. But I did have Barkley. But how do you get your mind around trading a generational prospect at the running back position who is still in his early 20s? Isn’t this who I should be building back around.

I put Barkley on the trade block, but I noted that I needed multiple picks and prospects in return. I knew if I was going to move Barkley, I wanted to be getting more ammunition that I could use to make moves in the offseason and the 2020 season.

Finally, a deal came my way that I decided was worth moving on.

In retrospect, I probably did not get the better end of this deal. But at the time, Singletary was coming off a 775-yard rushing season without being the featured back. I thought Buffalo was going to be moving forward with him leading the backfield. This is before they drafted Zack Moss. The timeless Frank Gore was gone, and Singletary was going to be the RB1. Or so I thought.

Likewise, I saw a lot of upside in Smith-Schuster. He was coming off a disappointing 2019, but he had 1,426 yards and 7 touchdowns as a rookie. I felt like there was still a lot of value in the young receiver. I added two more draft picks and felt good about the draft stock I was starting to pile up. But as I said earlier, you always have to be looking to move talent when you think you can get higher value. In this case, both Singletary and JuJu were not going to stay on my team for long.

Flipping Assets for My Gain

Our league was adding a Superflex position in the 2021 season, so the 2020 draft become a little different than years past. Add to it that prospects like Joe Burrow, Tua Tagovailoa, and Justin Herbert were in the 2020 class, and I knew I had to make a move for a young QB to build around.

I ended up with the following trade:

I wanted Joe Burrow. I still believe he is an elite QB prospect. I made this move to put a cornerstone prospect at the QB position for my future.
When all was said and done, the trade worked out to Smith-Schuster, Singletary, and Henry Ruggs for Joe Burrow, Antonio Gibson (our draft was early, and I got in before the hype), and Jacob Eason (another stab at QB that doesn’t look like it will work out). I was more than happy with this deal. I still am. And the guy who traded with me ended up winning the league last year, so he doesn’t look back on it negatively either.

Before the 2020 draft and throughout the 2020 season, my goal was to continue to acquire draft picks. I wanted to build my team back from the ground up, so I needed draft capital.

Here is how all of that panned out for me:

Even for me, that is a lot to look at. And this doesn’t even include all of my other deals, including trading away picks for players that I wanted to make as cornerstone pieces for the rebuilt team.

I needed to complete before I reached the 2021 draft: the draft that would determine the future of my dynasty.

After all my wheeling and dealing over two years, I entered the 2021 draft night with five first-round picks and one second-round pick. This was it. This was the draft that would determine where my team would be moving forward. I had picks 4, 6, 9, 10, 11, and 21.

Because I had set myself up with Kyler Murray and Joe Burrow, I felt like this draft was the time for me to load up at all the other positional slots that I could. I could get a third quarterback that could prosper into a star and give me more trade value, but I wanted to make sure my backs and receivers were solid and had depth at all positions.

I entered the draft with good starters at running back already, so my main focus was wide receivers and a tight end. I did have one back in mind as well.

The first three picks in the draft were all quarterbacks: Trevor Lawrence, Zach Wilson, and Justin Fields. At pick four, I wanted to take the receiver I was smitten with through the entire rebuild: Ja’Marr Chase. At five, Trey Lance was taken, which meant I got to take the top tight end prospect to maybe ever be in a dynasty draft: Kyle Pitts.

I took these two pass-catchers, knowing I was passing on Najee Harris. Personally, Javonte Williams was my favorite back in the class, and I was gambling that he would last until nine by skipping on Harris. Harris predictably went seventh, and Travis Etienne went at eight. My gamble paid off. I took Williams at nine and Devonta Smith at ten and then made one more trade call.

In this draft, I knew another manager in my league was looking for a QB because he was down to Patrick Mahomes as his only starter. I gave him a call and offered 1.11 for Brandon Aiyuk. He was reluctant but knew he needed to make his move for Mac Jones. He accepted.

My final move was moving up two slots in the second round from 21 to 19 to grab Terrace Marshall before he went off the board.

The night ended, and I had added Williams to my running backs, drafted a generational talent in Pitts, and boosted my receivers with Chase, Smith, Aiyuk, and Marshall.

So did this rebuild work? Well, we are about to start finding out in the 2021 season. But I can say this: I am very excited to have a young team that I believe can be competitive. After only winning six total games the last two fantasy seasons with this team, I am ready to find out what my rebuilt squad is all about.

What do you think? Did my rebuild make sense? Did I make too many moves? Did I not make enough?

There are some moves I look back on and wonder what could have been.
Maybe I shouldn’t have traded Antonio Gibson for a first-rounder before the 2020 season. But I felt converting the third rounder into a future first was a win at the time. Maybe I should have held onto James Robinson instead of upgrading a second-rounder to a first. But up until the Travis Etienne injury, most would have said I won that deal.

You aren’t going to win every trade, especially in a rebuild. But you have to try to strike when the iron is hot with some players, and I felt like I did that.

I honestly don’t know if this rebuild will pan out. I am relying a lot on the development of some young receivers and the health of my running backs for the next few years. But I believe my team is better now than it would have been if I slogged through the rest of 2019 and 2020 without making a drastic change. The DynastyGM tool says I have the most valuable team in my league now. At least I can hang my hat on that.

In all, it took 35 trades, countless waiver acquisitions, and the patience to know I would have to wait a few years to be relevant. But if these rookies and young players pan out, the entire rebuild will have been worth it.

And hopefully a true dynasty will have been formed.