The Sun-God Shines Brightly Over the Usually Gloomy Lions

Many wrote off the fantastic end-of-year Amon-Ra St. Brown had in 2021. But with his dynamic start to 2022, @timbmartens won’t be overlooking him anymore. 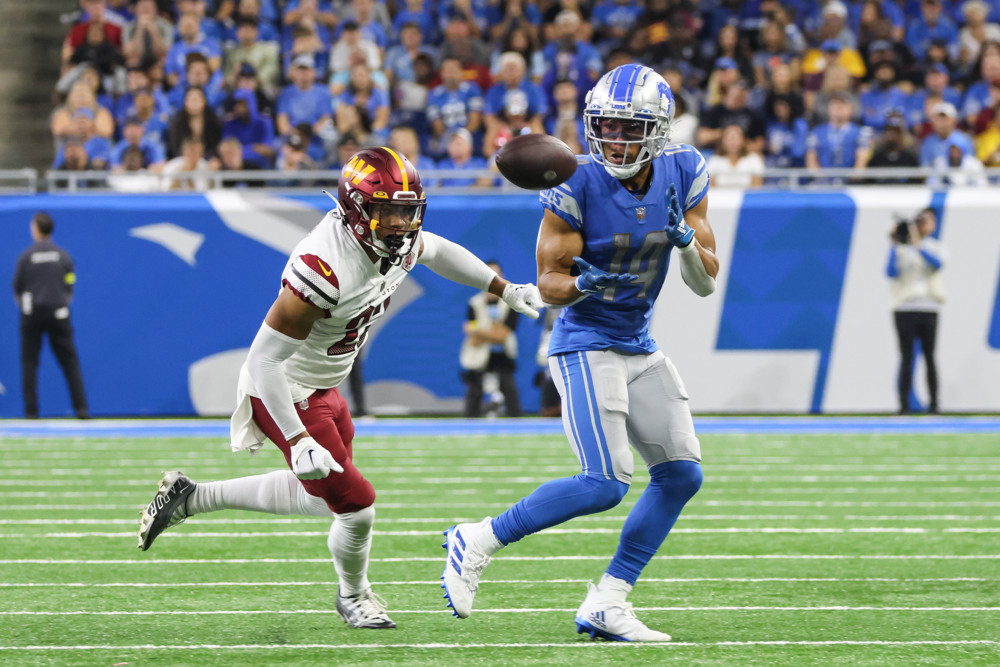 Hand up. I will be the first to admit it. I didn’t think the end of the year we saw from Amon-Ra St. Brown in 2021 indicated what kind of player he was.

Yet, I found every excuse in the book to not believe: the sample size is too small, the Lions have no one else of value to throw to, and their quality of opponent was not great. Yet here we are, two weeks into the 2022 season, and the most obvious conclusion I could have made is staring me right in the face: The Sun-God is the real deal.

As mentioned previously, St. Brown had a massive end to the 2021 season. Finishing as WR2 for eight weeks is a major accomplishment for any wide receiver, especially considering the year of receiving we saw last year.

Cooper Kupp had one of the best receiving seasons in NFL history. Justin Jefferson, Davante Adams, Ja’Marr Chase, and Deebo Samuel eclipsed 1,400 receiving yards on the year. Yet, ARSB was WR2 in the stretch weeks of the season when owners want to win the most.

For the last few years, I have been plotting rookie wide receivers and setting a guideline to be hit that can give us some odds of whether or not the wide receiver is likely to have a promising fantasy career. As I mentioned in that article last year, a rookie wide receiver that can’t eclipse 85 fantasy points in their rookie year is considered to be a dangerous prospect for their career.

St. Brown was one of only five rookies to eclipse that threshold, along with Ja’Marr Chase, Jaylen Waddle, DeVonta Smith, and Elijah Moore. All of this is to say that the writing (my own writing, to be clear) was on the wall that St. Brown could be a successful WR talent.

The question that remained in everyone’s mind was how St. Brown could continue to get the target share he was receiving. From weeks 13 to 18, St. Brown had ten to twelve targets every game. But with injuries to D’Andre Swift and T.J. Hockenson, St. Brown seemed to be the beneficiary of being one of the only decent weapons on the field.

But now Swift and Hockenson are back, along with the additions of D.J. Chark and (eventually) Jameson Williams this offseason. We could expect his numbers to come back to Earth now, right?

Even with other weapons available, St. Brown continues to shine bright. Perhaps even brighter than before.

In week one against the Eagles, ARSB had 12 total targets in the game. He finished with eight catches, 64 yards, and a touchdown. This all comes while being on the field for 88% of the Lions’ offensive snaps.

Not to be a one-week wonder, this past Sunday, St. Brown showed out against the Commanders. Once again being targeted 12 times, ARSB hauled in nine catches for 116 yards and two touchdowns.

Goff has only slung the ball 71 times thus far this season. This means St. Brown is being targeted 33.8% of the time in the Lions’ offense. An almost completely healthy offense is looking to ARSB on a third of their pass attempts. Yes, the sample size is small, but through the first two weeks of the season, that is a better target share than fellow 2021 rookie Ja’Marr Chase is even seeing (28.4%)

Through two weeks, St. Brown is finding himself in a familiar spot. He is a top-three WR on the year in half-point PPR, falling just behind the unstoppable Kupp and always reliable Stefon Diggs. But now, this is starting to feel a little different. The sample size is getting too large to deny it. This is starting to feel like St. Brown truly is the real deal.

For reference, what St. Brown is currently doing is a rarity in the NFL. Brown joins two of the best fantasy wide receivers we have ever seen for consecutive games with eight or more catches.

And those eight catches aren’t just unimportant dump-offs. St. Brown has scored a touchdown in seven of these eight games. He has totaled 68 catches, 788 yards, and eight touchdowns. That would be good enough for WR29 for the entirety of the 2021 NFL season, and he did it in only the last eight games.

The pace St. Brown is currently on is quite incredible. Many fantasy writers, myself included, didn’t think he could sustain this output. But after two straight weeks to begin this season showing that he is still a major contributor to this offense, there is no denying it: The Sun-God looks like the real deal.

Will ARSB continue to average eight catches a game for the foreseeable future? Not likely. That would be a pace unseen by any receiver in NFL history. But I’ve doubted him before. Maybe it’s time I learned my lesson. I’ve already skyrocketed him up my rankings. I encourage everyone to do the same.