The recent injury to Rashaad Penny has opened a door for a popular rookie RB selection to walk through. Is his skill set translating? Walk through some tap with @FFB_Vern to find out. 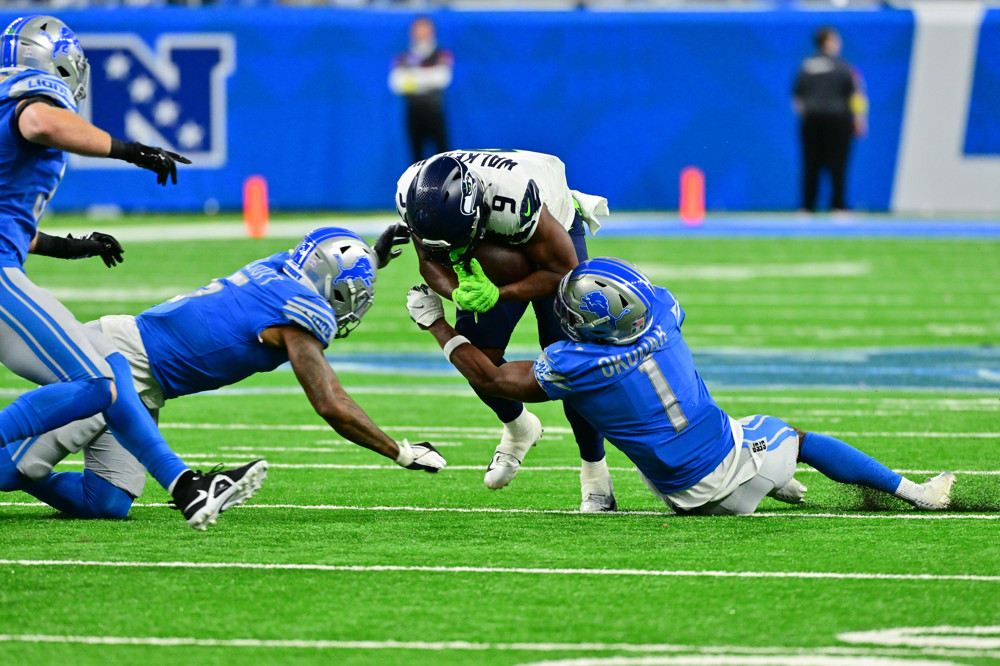 Kenneth Walker III (highlighted in “Week Six Takeaways: The Decisive NFC West”) was widely thought to be the RB2 in 2022 rookie drafts, but as highlighted in the “Tracking Translation” RB primer, there were obstacles to his ascension. Rashaad Penny’s placement on injured reserve has removed the most significant barrier to opportunities. This change has suddenly diminished the importance of Walker’s performance in certain areas to earn reps. Let’s look at a few clips to see if he is indeed translating his skills to the NFL.

Walker’s explosiveness was an essential aspect of his draft hype. Predicated on athleticism, there is virtually no guarantee it would translate to the NFL. One of the reasons is play speed. Mental processing speed can negatively impact play speed if a player has to think more about a given play. When all the information he needs is in front of him, he does appear to play fast. He demonstrates this in a few plays you probably remember.

In this play against Arizona, we see some great qualities that indicate a high-end play speed. First, we see his ability to press the point of attack with a shoulder dip despite the clogged look. This small action causes 52 to hesitate on his path to the edge, which becomes essential.

After the shoulder dip, Walker bounces the play despite the defensive end’s outside leverage. What this shows us is Walker’s confidence and knowledge of his ability in context. Normally, working counter to leverage is a terrible idea. This works because Walker’s high-level lateral agility and burst are better than the defensive end’s ability to disengage and change direction. Once Walker gets the edge, it’s just a matter of a little elusiveness and contact balance to generate a 21-yard gain.

In this other play, you should have seen an extreme example of what Walker can do. The caveat is this is what he can do if all the information is within his cone of vision.

In this weak side Outside Zone run, it is evident that the edge is closed as soon as he gets the ball. All of the leverage points him to cut back, and he does. This nice sharp cut-off of a gentle hop allows him to explode right off the backside of the right tackle, maximizing space. From there, very good open-field vision and athleticism take over, generating a 67-yard score.

One thing we must not overlook is what happened at the second level. The linebacker #30, Justin Evans, misplayed here. Prior to avoiding Lockett’s incoming block, he had a straight path to limiting Walker’s gain. If nothing else, Evans could have impacted Walker’s path, thus reducing the gain and keeping a touchdown off the board. That said, Walker’s explosiveness at the NFL level is indisputable.

We just saw some excellent examples of when Walker plays fast. Unfortunately, this level of play speed is not as consistent as we should like for his establishment as a top-end dynasty running back. Before we look at the play speed concern, let’s look at a play that reminds us of something important.

We know Kenneth Walker is explosive; we just saw two pieces of evidence to support that perspective. The thing is, his athleticism, while the same as in college, does not afford him the same advantages at the NFL level. A quick look at this screen pass helps us remember that.

This would have been six points at Michigan State or at least a first down. Obviously, NFL athletes are bigger, faster, and stronger, but a reminder of how that context affects the upside is valuable. To be clear, Walker did not underperform in this play.

However, we do see an area of concern with his play speed on the next play. Here we see another Outside Zone play to the weak side. The center and right guard complete an excellent seal and exchange on the 2i technique. The right guard begins to climb to the outside linebacker, but for some inexplicable reason, Walker makes a shoulder-shake move to the inside, impacting his pacing. There is no linebacker to manipulate here, which makes this more puzzling. Had he anticipated the leverage of the second-level block by the right guard and angled his path off his hip, this would have been a chunk play.

This anticipation issue is present in many short gains and TFLs. To me, this indicates an inability to infer the backside picture based on his cone of vision. Play speed and anticipation are more challenging skills to develop. It will take time, and at this point, I have no reason to believe that he cannot grow in these areas. In the meantime, dynasty managers can live off of the explosive upside of his athleticism.

His athleticism is apparently translating well, but the mental side of his game has plenty of room for growth. Additionally, we will want to see more evidence of his pass-pro ability before crowning him a 3-down asset. Therefore, he has not yet fully translated his skills to the NFL, but all indications are that he will.

Can you buy him now? That all depends on your roster situation and perspective. Let’s look at a few simple trades in the DynastyGM Trade Browser.

This is an interesting trade. In my view, the trade is worth it only if you are stacked at wide receiver with adequate youth and anticipate being competitive for the next 2-3 years. Chris Olave will be a stud, and we will look at his translation fairly soon. However, if you are close to winning this year but are an injury away from your running back corps taking you out of competitive status, this could be worth it. After all, we are here for the ‘ships. Right?

This is the trade I would rather make. I know many of you get anxious about trading 2023 picks, but again, in a competitive scenario where your running back corps depth is in question, this would be worth it. In my opinion, the “known” of what Walker is in this offense is worth more than the unknown of the draft position, let alone the prospect’s translation of skills. This is a relatively small premium to pay if it helps you stay competitive.

At the end of the day, the decision is yours. Consider what was covered here in any decision you make. The upside isn’t the question, but the duration of the wait on the development of play speed consistency is. More trade inspiration is available in the DynastyGM Trade Browser. Get DynastyGM and dive in today! More Tracking Translation is coming your way as we approach the midpoint of the season, so continue to follow me @FFB_Vern for more insights.