Travis Kelce has been the premier tight end for the past five seasons. Is he slowing down or still burning bright? 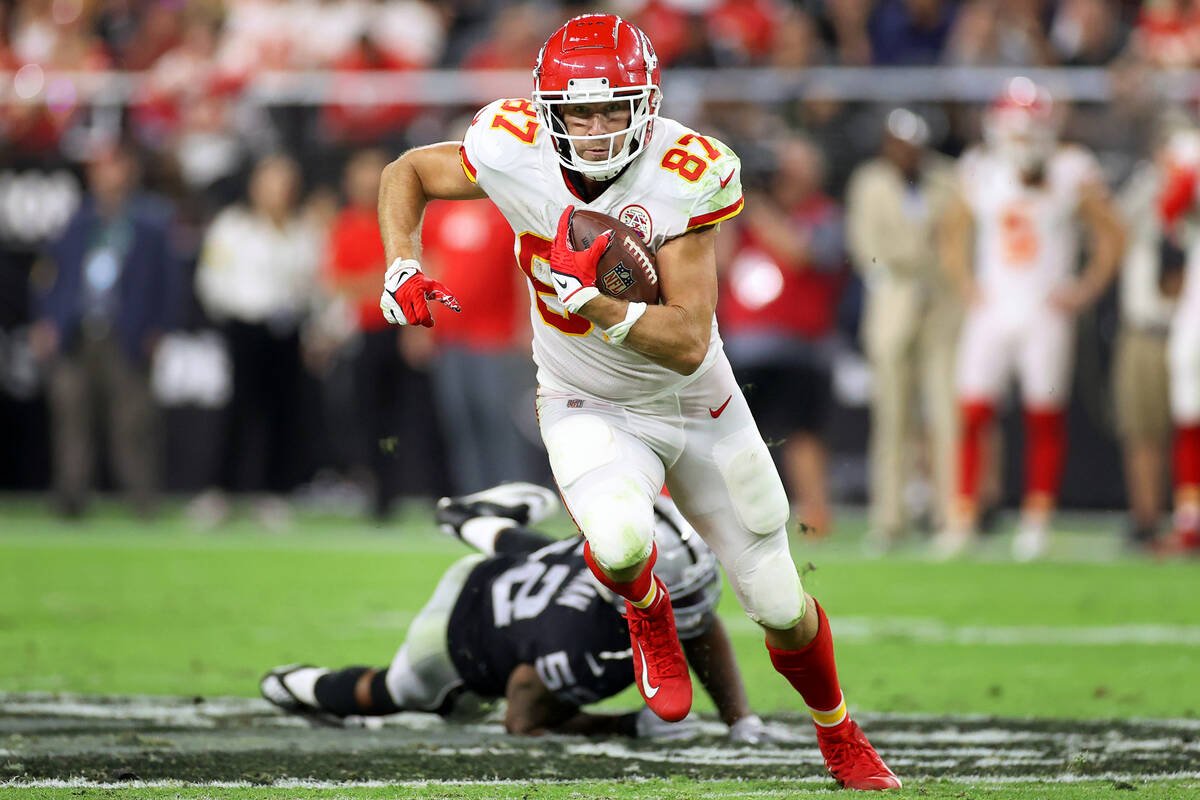 A few weeks ago, a friend told me that it seemed like the era of Travis Kelce dominance had finally started to fade. This was after the Monday Night Chiefs vs. Giants game where Kelce ended with 4 catches for 27 yards, no touchdowns, and a lost fumble.

Two weeks later, with two 15-plus point performances since, that friend is still convinced that the Kelce era is starting to wind down. “The Chiefs are getting figured out, and he is getting older.”

There are a few players in fantasy that we can consider to be cheat codes. For years (when healthy), Christian McCaffrey has single-handedly won matchups for owners. Late-year Derrick Henry games have been the difference between an early playoff exit and a championship.

But Travis Kelce has been and continues to be one of the greatest players to roster in fantasy football, and believe it or not, he is not slowing down.

Dominance Over the Competition

Since Kelce started playing consistently for Kansas City back in 2014, he has been a huge part of the Chiefs offense. In his first two full seasons playing, Kelce was the eighth-best TE in half-point PPR both seasons.

And then everything skyrocketed in 2016.

But this is more than just being the best at your position. In 2018 and 2020, Kelce scored double the points on the year than all but six other TEs in the league. If you had the TE7 on the year, Kelce gave his manager two points for every one of yours.

Let’s look at a chart showing how much lower percentage-wise the other TEs scored on the year compared to Kelce.

We should note that this chart does not include points per game. Some TEs may have missed a game or two in the season and would be closer to Kelce in PPG than these percentages indicate. But this is also to show another important aspect of Kelce: availability.

Since becoming a full-time starter in 2014, Kelce has only missed two games in his career. Both were when he was rested in week 17 after the Chiefs had wrapped up their playoff positioning. Kelce is not only dominant at his position, but he is also playing every single week.

However, for all of this good, these stats look a bit different when we account for simply how many points a particular player is scoring in the actual games they are playing in. The following chart shows Kelce’s PPG per year versus the PPG scored by the twelfth highest TE in PPG (10 games played minimum):

Kelce’s insane 2018 and 2020 show out in both these charts, with the tight end scoring more than double the points per game than the TE12 on the year in PPG. If you had Kelce, it was almost like starting two tight ends.

But is this difference as significant as many of us have made it out to be for so many years? Let’s take a look at the quarterbacks, running backs, and wide receivers that finished first and twelfth in these same years:

While Kelce’s advantage over other TEs is still more significant than the WR1 over the WR12 the last three years, QBs and RBs have a larger separation between the top twelve finishers in all but one of these years. While the points Kelce is scoring are significant, the advantage looks less exciting when comparing these charts.

What you do have to remember is that Kelce is right there at the top of the scoring for TEs every single year. Yes, the difference between RB1 and RB12 is more significant. But you would have to have that RB1 every year. Four different running backs took that crown over the last five years. Only Mahomes has repeated as QB1 in PPG the last five years.

Kelce has been TE1 four of the last five seasons and was TE2 in the one exception. He’s available, reliable, and consistent.

So that brings us to the overall question: is Travis Kelce losing some of that advantageous edge?

Put simply: no. But let’s take a look anyway:

Kelce is once again running away with the TE scoring title in 2021. At this pace, he will outscore his opponents by a higher percentage than he even did in 2020. Also noteworthy is only five of the other eleven tight ends in the top twelve were also top twelve scorers in 2020. It is a huge advantage having Kelce’s consistency.

But how does the breakdown look compared to other positions? Let’s take a look at the difference between the first and twelfth player in each positional group (minimum seven games played):

Once again, Travis Kelce leads TEs in PPG, but he has the smallest per game advantage in any positional group of the first player versus the twelfth player.

Herein lies where it can be hard to see the advantage of having Kelce when you are in the heat of a season. His per-week scoring over the competition at his position does not seem as prevalent compared to someone who has a major advantage at the RB or QB position.

Let’s look at all of the current top-12s at each position group:

Tight end scoring is, on average, much lower than the QB, RB, and WR positions. It is sometimes hard to see how much of an advantage having Kelce is for a team. Kelce is TE1, but he is still scoring less per game than the twelfth QB, RB, and WR. If you are only looking at one Kelce game in a vacuum, it could even make you question if Kelce is starting to fade.

The question is probably in the back of the mind for Mahomes and Hill managers too. “Should I sell before the collapse?” Talking heads on ESPN and other sports networks have blabbed all year about the league “figuring out” the Chiefs and how the Chiefs are “broken.” The thrill of the Kansas City offense is not nearly as exciting.

While the Chiefs record is a little more tainted than recent years, and their offense hasn’t looked as explosive, look at the chart above. Mahomes is QB4, Hill is WR3, and Kelce is TE1.

From a fantasy perspective, the Chiefs big players are still producing for you.

When you are in the heat of the season, it is sometimes hard to see the advantages you have with certain players on your team. While it is easy to look at totals at the end of the year and realize a player like Kelce is the best at his position, you may not feel it every week.

But Kelce is in no way slowing down. He is producing below his fantastic 2020, but he is still on pace to beat his 2019 total and have at least his third-best season of his career.

And, more importantly, Kelce is the name at tight end. While other players that are the best at their position are more advantageous to have in one particular season, Kelce will be TE1 for the fifth time in the last six seasons.

You don’t get that kind of guarantee from any other player at any other position.