Truth or Trap: Which is Josh Kelley?

Highlights can deceive your eyes. Are you seeing the truth or is it a trap? Dive in to Joshua Kelley’s tape with @FFB_Vern. 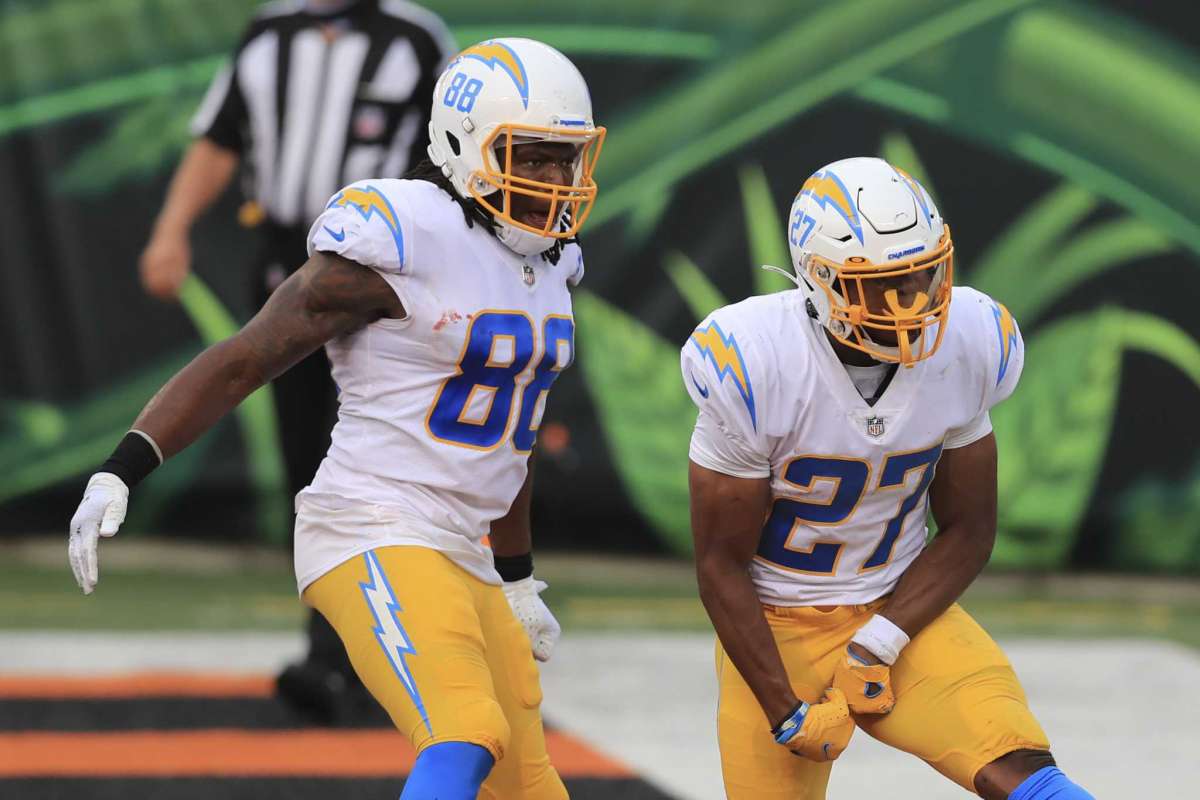 Have you ever been tempted by a highlight? C’mon, admit it! You know you can attribute one bone-headed move or another in your dynasty career to overvaluing a highlight. Highlights have a way of rooting themselves in your mind. If we aren’t careful, we can end up defining a player by less than ten seconds of evidence. That is a poor process. The goal here is first, dissecting these highlights. Second, we dig into the current tape to see if elements shown on the big play are consistent features of their game.

First, let’s start by looking at one fact: Kelley only had THREE fewer touches in the first two weeks than the twenty-four million-dollar man, Austin Ekeler. This speaks volumes to what the Chargers believe about Kelley. However, week three showed us just how quickly a negative game script could hurt Kelley week-to-week. In these scenarios, we could easily see Ekeler out-touch Kelley on his targets alone. A less flattering statistic for Kelley is efficiency, where Ekeler has a significant 5.0 YPC to 3.9 YPC advantage.

Let’s consider those two things together. Rational coaching would suggest the more efficient player who just got paid should take the bulk of the touches. We did see this play out when the Chargers had to chase points. Maybe the Chargers want to expose Kelley to a healthy amount of NFL-caliber touches. This could conceivably result in production later in the season, assuming he grows with experience. There seems to be some promise there, but it’s not without challenges.

In Week 1, Kelley averaged 5 YPC on 12 carries and punctuated his debut with a touchdown. He also had a huge 26-yard gallop that may have caught your attention. Running Back Vision indicated that Outside Zone (which includes Mid Zone for grading purposes) was one of his biggest strengths as a runner.

In this play, we can see a few things that matter. We see Kelley’s ability to read leverage and make the right decision. He also commits to this decision, bursting into the secondary. We also see that he was able to continue accelerating into the open field to the boundary.

These are all great things, but this is just one play. One thing that unlocked this play was a very athletic block by the right tackle who dove like an action hero to deal with the linebacker in the cutback lane. The safety also took a poor angle. We shouldn’t count these details against Kelley, but instead, look for more evidence of upside.

While watching the tape in other runs (and against arguably better defenses), we see some warts. In the play above, narrow vision may become a concern. This could lead to leaving “meat on the bone” on runs that might otherwise be explosive.

In the context of the touches he is getting, we could chalk this up to learning the complete scope of plays. As we see above, if he had a full understanding of the play, he could have cut back to his left. While occupied by a defender, this lane has a receiver intending to make a block at the second level.

This play provides evidence that he can make that type of decision we wanted to see in the previous play. Add to that, his hip flexibility and explosiveness to cover several gaps then transition back to vertical. What if he was able to do that consistently? What if it’s only a matter of improving play speed (mental processing + athletic ability)? Mental processing is just a matter of learning the offense and learning the nuances of NFL-level running back play.

Since we often assess tape with our eyes, identifying the quality of certain traits can be challenging. Sometimes we can mistake fast foot-strike speed for actual speed or maybe overlook a player’s burst due to relative movement on the screen. With acceleration type qualities like burst, we have to consider other points of evidence. Specifically, with burst, the Scouting Academy teaches us to ask this question: “Was the runner able to erase defenders’ pursuit angles?” We must assess bad angles, of course, and the following clip is one such example.

Notice how it appeared that the defensive tackle (#94, who had a great swim move by the way) was on a line to make this tackle for loss. We then see a sudden increase in space as he attempts that tackle. Also, the box safety made a one-step error costing him the opportunity to make the play. We again get to see Kelley’s willingness to finish with violence on the sideline.

If you don’t perceive burst upon first look, this is a good type of evidence to seek. With that said, truly assessing the quality of that burst requires the context of competition. Typically, defensive tackles do not have the foot speed to catch a running back. Therefore we take the initial burst with a grain of salt. His acceleration to make the safety miss is more impressive/important when considering his burst.

Kelley’s burst quality would be graded as ‘Good’ with only ‘very good’ and ‘elite’ as better possible grades. Again, I caution that the body of evidence is small. The real takeaway here is the speed of his vision-decision-action (VDA) cycle. If his VDA is a hair slower, this is a tackle for loss. As we all know, NFL games are won by small margins where fractions of a second can be the difference between a six-yard gain and a two-yard loss.

What We Need to See

“What’s missing?” This should be a question we continually ask until we are confident in a player’s ability. It has only been two weeks. Making conclusions about a player with this small sample size would be irresponsible. It would be equally reckless to dismiss some of the evidence of upside just because the sample is limited.

I see a 5’11”, 220-lb running back with at least solid vision, good change of direction, explosive ability to jump gaps, good burst, that can finish with power. The jury is still out on his receiving ability in the NFL since he has only seen five targets, but it will become clear with time. He is sure to get some of that opportunity given what he does on plays like this…

If we can see more of the above, I’m in! Total boxes we should look to check off when watching his tape include:

That fumble we saw after the big 16-yard gain in Week 3 cannot become a consistent concern if he is to become a dependable piece of the offense. An uptick in fumbles frequency erases all the positives highlighted here.

One fact I failed to bring up is his short-yardage conversion rate. He has converted 75% (6 of 8) of his short-yardage attempts (two or fewer yards). Given his build, we could expect more opportunities for him to provide value in this fashion. We all know how valuable goal line touches can be, and Ekeler has seen only two touches in similar situations. Seeing this trend continue would be a major plus. We want to see continued consistency in trusting Kelley with these types of touches.

For Kelley, I am leaning ‘truth.’ Touches so early in his career, and leap-frogging veteran Justin Jackson in the process are encouraging. He has the critical factors we want in a running back like vision, burst, and power. He is getting an opportunity that could increase, given the rash of injuries we just experienced in week two. As of the moment of this writing, I like the idea of acquiring him while Ekeler is suppressing his price. His price is only going to rise as he continues to check off more boxes on his road toward a low-end, dependable RB2.

I’ll be following young players and dissecting the flashes we see all season long. In the process, I will continue to help us get to a determination of truth or trap with regard to these highlights. In the meantime, follow me @FFB_Vern for some teasers to the next performance I will breakdown. PSA: If you aren’t using the DynastyGM tool, you could be saving a lot of time and crushing a lot of trades, so don’t delay. Check it out today! Until next time.