This 2023 running back class is a lot of fun, @MandrewNFL breaks down the top end talent as well as the depth players making it a loaded class. 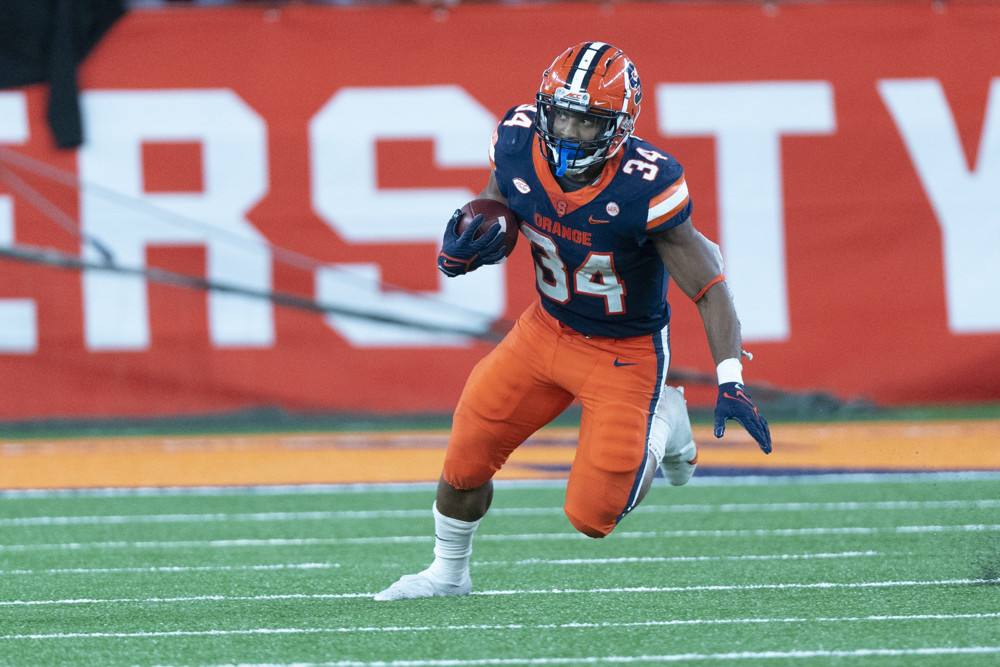 The 2022 running back group has some solid rookie talent in it. The 2023 running back class may be better and deeper than this one. All the top-end talent saves this class. 2023 has what I see as ten bonafide starters.

Of course, those ten all have to be on the right team to have the chance to earn a job. No matter what, I see this running back group, in terms of the top ten, ready to contribute on day one, provided the scheme isn’t too different from their college offense.

A prime example, Rhamondre Stevenson and Damien Harris were both dominant in college. They had starting traits, but they landed in New England. The Patriots like to have as many running backs as Nick Cannon does kids; thus, they are in a rotation. These guys we will discuss today are worthy of at least that role in the 2023 running back class.

I have said it once, and I’ll repeat it, Bijan Robinson is the best running back prospect since Saquon Barkley. We rarely see his blend of vision, size, and speed. We saw it with Adrian Peterson, and we saw it with Barkley; Robinson is in that tier as a prospect. Look for him to take full advantage of this new-look Texas offense with Quinn Ewers under center.

Jahmyr Gibbs was finding success at Georgia Tech but decided he needed more. That more will come in the form of the Alabama offense, where he can showcase his skillset. He has good vision and natural catching ability, which is perfect for today’s NFL. Where Gibbs really separates, literally, is with his long speed. If he gets just a few feet of separation from his defenders in pursuit, he is gone.

Syracuse has a tradition of good running backs, but none in recent memory compare to Sean Tucker. He has a track background, so you know the speed is there. What shines on film, though, especially against Notre Dame, is his determination. Every play, you can tell he wants to score and refuses to be told otherwise.

I avoided the low-hanging fruit of a Tavon Austin comp, but that doesn’t make Devone Achane any less electric. He split the workload with Isaiah Spiller and will likely split the running back job again. However, what he provides to the Aggie offense is the explosiveness that he can score every time he touches the ball. He is still a little raw in the passing game, but with some continued growth, we expect him to be sitting pretty in these 2023 running back class rankings.

Coming in at five with a potential to be in the top three is Zach Evans. I love his vision, toughness, and speed he possesses. What I think is going to take off this year in the Ole Miss offense is his passing ability. He flashed it some at TCU before transferring, and it was a thing of beauty. Melvin Gordon did the same thing at Wisconsin, and once he hit the NFL, he became one of the best dual-threat backs in the league.

If you want a fun watch from this running back class, Zach Charbonnet may be the guy. He may be sixth in the rankings, but his film is hilarious at times. He will go out of his way to lay the lumber on a guy, whether blocking or running. The value that brings to an offense can’t be measured, and the NFL loves a back who can pass protect. It allows them to stay on the field and be a three-down back, so keep an eye on him despite his ranking. He could remain around this rank, or he could be a great fantasy value a year from now.

Tank Bigsby was a player I liked early on in the scouting process. He has phenomenal footwork both in open space and at the line of scrimmage, which makes him very elusive. He has the frame where you wouldn’t expect that out of him, so when you see it is pretty impressive. Look for him to be a focal point in the Auburn offense this year as he continues to develop and potentially rise up these ranks.

Another running back who hasn’t been used to his potential yet but is going to this year is Blake Corum. His running mate this past season Hassan Haskins is now in the NFL, and Corum is set to become the straw that stirs the drink in Michigan. His tremendous explosiveness and vision allow him to be a homerun threat. Michigan doesn’t ask much of their running backs to do much else, so this is a great system for Corum to showcase his ability.

Deuce Vaughn doesn’t look the part of an NFL running back, but his vision as a runner makes him one. His vision leads him away from trouble, finds running lanes, and allows him to be one of the best backs in the country. Will that translate to the NFL? Sure, but is it sustainable for a three-down back with that size? That is the part that has him coming in at nine.

Rounding out the rankings is another big, strong back who doesn’t shy away from contact. DeWayne McBride is a former 3-star running back who was the 11th-ranked player at his position in the 2019 class. He has turned into a player UAB relies on when the offense is struggling. McBride can provide a spark as both a runner and receiver while also providing pass protection. He can definitely be a more serviceable back in the NFL. It will just be in a system that is a rotation.