@DanT_NFL is back and reporting on the top takeaways each week! In this article we review action from both the AFC & NFC South. 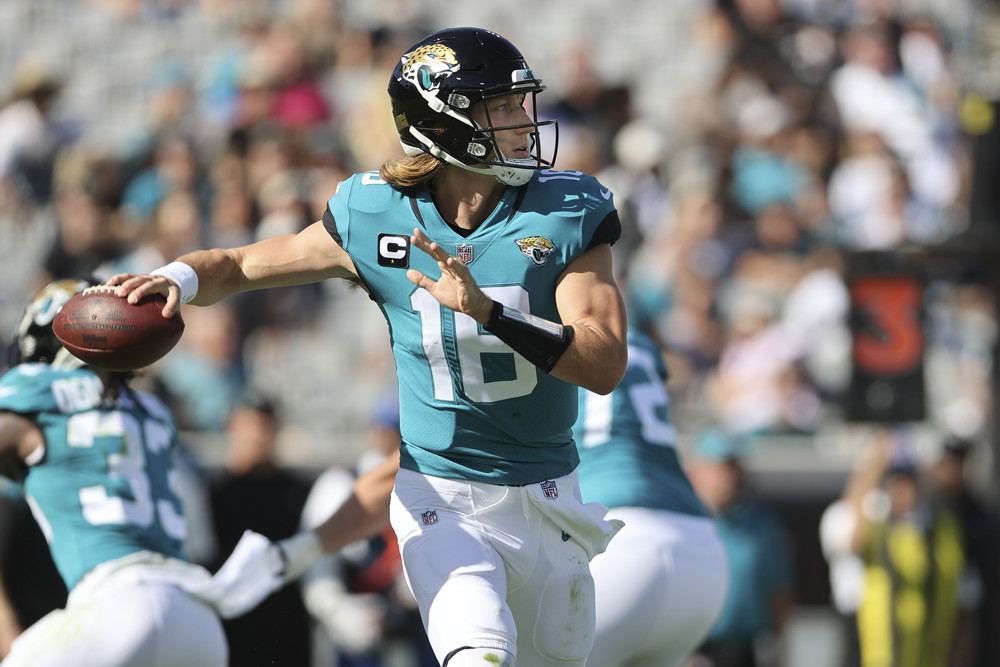 We are now in the final playoff push! These next few weeks are critical for both contenders finalizing a playoff spot and rebuilders who may want to make a last-second trade to acquire draft capital and/or younger players. This is the time of the year when we generally see rookies break out and take over their offenses. Like early season trends were critical to tracking, end-of-season trends are vital to our dynasty fantasy football knowledge. Here are some key takeaways from the past week of NFL action!

We finally realize the generational talent that Trevor Lawrence was hyped to be before the 2021 NFL draft. His rookie campaign was shaky at best, as he ranked near the bottom of the league in many statistics, such as Yards Per Attempt and Touchdown to Interception Ratio. The discourse of the fantasy community was all over the place, as some were using Peyton Manning as an excuse and others declaring him an outright bust. The actual result was somewhere in between.

This past Sunday, Lawrence completed 30 of 42 passing for 368 yards in a decisive victory over division rival Tennesse. He sprinkled in three passing touchdowns, seven yards, and a touchdown on the ground. Before Monday Night Football takes place, Lawrence will finish as the top-scoring fantasy quarterback. This gives Trevor eight top-twelve fantasy finishes of the year. This easily surpasses his total from last season. This Jaguars team is young, with plenty of draft capital and money to place more weapons are Lawrence this offseason.

Many may have picked up Chigoziem Okonkwo after their rookie drafts last year just to have a player with a funny name on the roster. However, these managers are being rewarded as Okonkwo finished this week as the TE2 on the week before any Monday Night Football action has happened. Chioziem ranks top five amongst rookie tight ends in both targets and yards.

This past Sunday, Okonkwo finished the game with six catches on six targets for 45 yards and a touchdown. That is now three weeks in a row with five or more targets. This is the first game without Treylon Burks, but his streak of targets started before Burks went down. So we cannot chalk the targets up to the Burks injury. Okonkwo is earning his targets and should immediately be added if he is not rostered in your leagues.

The Houston Texans found themselves without Brandin Cooks and Nico Collins heading into Sunday’s matchup with the Dallas Cowboys. This left a receiver group that included Amari Rodgers, Phillip Dorsett, and Jordan Akins. However, Chris Moore was the shining star during the 27 – 23 loss.

Moore commanded 11 targets and hauled in 10 of them for 124 yards. This information is vital to pay attention to as this Texans team is in a middle of a rebuild and trying to figure out what players will be a part of their future in 2023 and beyond. Nico Collins and Amari Rodgers are under contract beyond this year, and Brandin Cooks can be cut for a minimal dead cap hit. Look for Houston to re-sign Moore this off-season.

In the last two weeks, Chuba Hubbard has been trending up on his carry count and significantly cutting into D’Onta Foreman’s workload. This makes perfect sense for a roster whose eyes are set firmly on 2023 and beyond. Hubbard is the much younger back, and Carolina should get a strong read on what they have before entering the 2023 off-season. D’Onta Foreman will be a free agent, and the team will have plenty of resources to draft a new back if Hubbard cannot prove himself over the next few weeks. Carolina is looking like a prime landing spot for one of the highly drafted rookie running backs.

Is Rachaad White Starting Running Back?

Another backfield in the NFC South is transitioning from a veteran to a younger player. Rachaad White has significantly cut into the workload of Leonard Fournette in the past few weeks. Sunday’s distribution probably has to do more with the score of the game than the intended workload the coaching staff intended. The Buccaneers were down multiple scores from the beginning of the game and never found the footing to mount a comeback. Rachaad White can easily be a playoff league winner were anything were to happen to cause Leonard Fournette to miss any time in the upcoming weeks.

Information is the most powerful tool any dynasty fantasy football manager possesses. If you can stay on top of the correct information more than your league-mates, you will come out on top. Be sure to check back with us, as we will be breaking down takeaways from every division this week. And be sure to come back next week, as we will be doing the same for all 18 weeks of the 2022 NFL season!

The NFL season is here! Want exclusive access to my rankings and those of over twenty fellow analysts? Subscribe to the #NerdHerd, where you get exclusive content, dynasty/rookie rankings, and DynastyGM! If you want 15% off  ANY SUBSCRIPTION, USE PROMO CODE “LUNA” or CLICK HERE.

I hope you enjoyed this piece in our Winning With Vegas series. For more content like this, follow me on Twitter @DanT_NFL. DMs are always open for any questions, comments, or craft beer recommendations!