Can you believe it’s already Week 11 of the CFB season? @tristancook_ is here to break down all the players to know in the Weekly Watch! 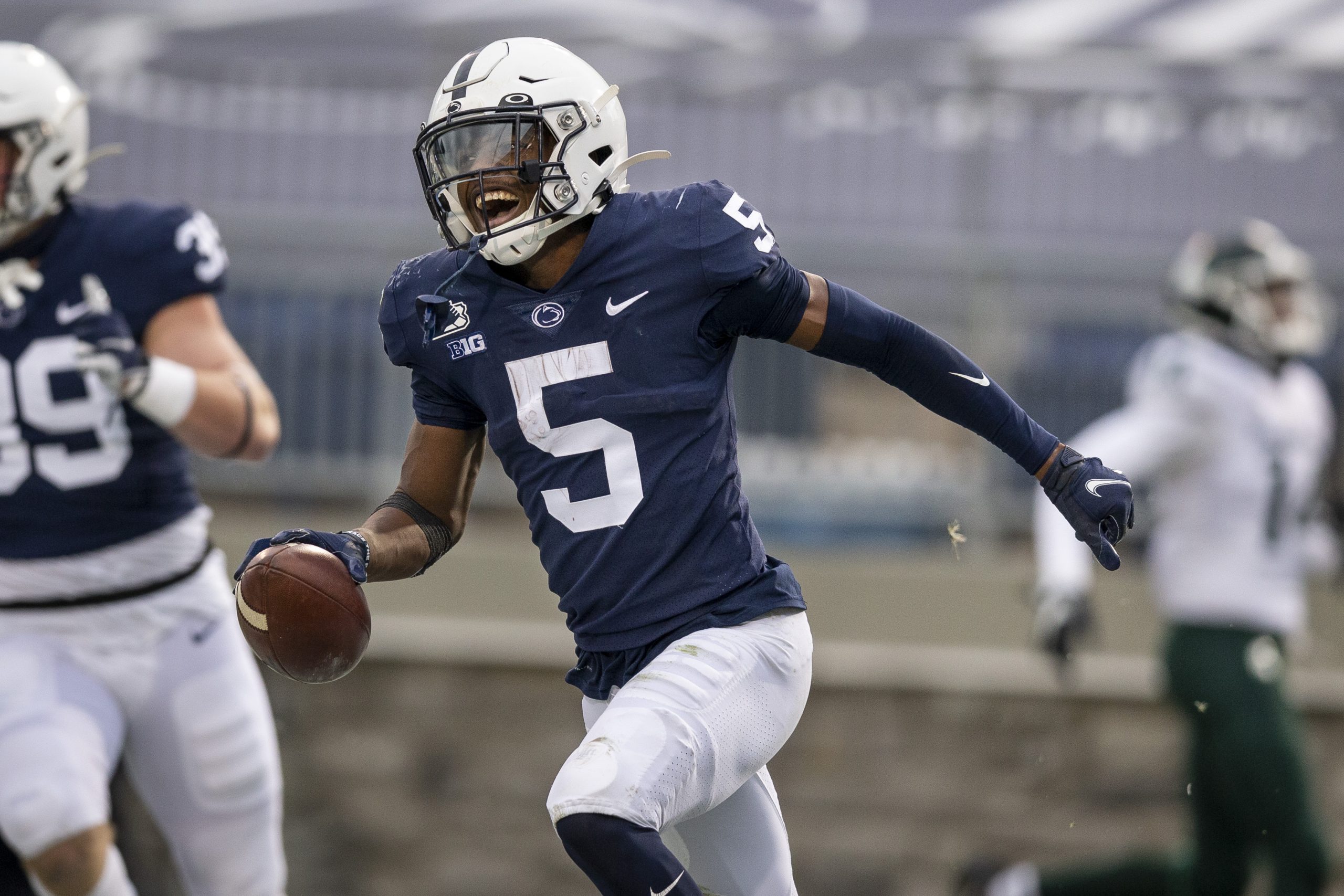 Week 10 of college football is here! If you’re new to this article, the goal is to bring you the top dynasty prospects to watch in nationally televised college football games. It’s never too early to take a look forward. Who are the top prospects playing? Who are going to be the sleepers of upcoming rookie drafts? Check back here every week for my ‘Weekly Watch’ series before you head into the weekend. Use this article each week as a place to refer back to as you get ready to watch each game.

Feel free to reach out on Twitter (@tristancook_) if you have players you think deserve to be mentioned in next week’s article. But, hopefully, this will give you a few names to monitor throughout the year.

The main name to know on Michigan’s side of the ball is RB Blake Corum. Unfortunately, we aren’t exactly sure of his status for this game. Michigan hasn’t exactly been forthcoming on whether or not we will see Corum on the field, or if so, just how much. Fortunately, he’s a 2023 prospect at the earliest, so we have plenty of time to watch him. If he misses, look for Hassan Haskins to carry the ball a ton again for the Wolverines.

To say that Jahan Dotson had a big day last week against Maryland wouldn’t be doing him justice. Dotson dominated the Terps going for 11 catches, 242 yards and 3 TDs. He showed off all of the elements of his skill set and deserves to be considered in the top tier of WR prospects for this class. Not that his receiving line wasn’t impressive enough on its own, but his 242 receiving yards accounted for ⅔ of the passing yards for the whole team. No one else had more than 4 catches or 36 receiving yards. Dotson figures to have a harder matchup this week, but I wouldn’t be surprised if he continues his ascension up draft boards.

The first guy to know is freshman QB, Caleb Williams. He’s been the talk of CFB since he took over for Spencer Rattler against Texas. After a lackluster game against Kansas, Williams tore it up against the Red Raiders, throwing for over 400 yards with 6 TDs. Williams will undoubtedly be in the discussion for the top QB prospect of the 2024 class with performances like this.

After a couple of bad games with Williams throwing the ball, Marvin Mims also had a big week against Texas Tech. He hauled in 4 passes for 135 yards and 2 TDs. Mims is one of my favorite WRs for the 2023 class. He seems to be a notch or two down for many people, but consider me a fan. I expect another big day for him this week.

The final name to note is junior RB Kennedy Brooks. He’s been the workhorse this year for the Sooners, and has looked rather impressive in doing so. I think that there’s a chance that Brooks could surprise some people at the next level. I’m not sure how I feel about his top-tier potential, but he’s definitely intrigued me so far.

The player to note for Baylor is senior WR Tyquan Thornton. The Bears may have lost to TCU last week, but Thorton did his part, putting up 121 yards on 5 catches with 2 TDs. His NFL future will largely depend on how well he tests, but I think he has a chance to make a splash at the next level. He will again be the top target for Baylor against Oklahoma.

The guy to know for Georgia remains as RB Zamir White. He had a disappointing game last week against Missouri. I’m sure he’ll do better this week. I think his talent is potentially as good as anyone in this class. But, his NFL potential will likely hinge on two things: his medical evaluations, and his testing numbers. If he gets a clean bill of health from the NFL doctors and tests well, I think we will hear Zamir’s name called a lot earlier than most people anticipate.

The other player to know for Georgia is JT Daniels. The Bulldogs’ QB situation is almost as confusing as the USC one. JT Daniels managed to get in the game last week, completing 7/11 passes for 82 yards with 1 TD and 1 INT. I’m still a believer in Daniels, but at this point, I don’t think there’s any way he declares for the NFL. So, he’ll probably be back in Athens next year or perhaps he’s enter his name into the transfer portal yet again.

Well, the Purdue Boilermakers did it again. They upset #3 Michigan State last week, and as expected, it was due in large part to the play of David Bell. He caught 11 passes for 217 yards with a TD. The value of this 2022 draft class is going to be the WR position, and it is shaping up to be a deeper class than many people thought. Bell is a guy that I will certainly be looking to target as his name is deserving of top-tier consideration.

Another top WR prospect in this game is Garrett Wilson. He missed last week’s game against Nebraska with an undisclosed injury, his status for this week remains uncertain. It looks like he’s trending in the right direction, but we don’t know for sure. If he’s on the field, you’ll likely see him heavily involved. I have him as my WR1 for the class right now, just ahead of Treylon Burks out of Arkansas.

If Wilson misses this game, the guy to watch is Chris Olave. He had a nice game last week without Wilson on the field, but was a bit overshadowed by the monster game from Jaxon Smith-Njigba. The important thing to note here is that OSU has a ton of top tier WR talent, so there will be some down weeks for these guys. Olave remains a solid WR in this class, near WR5 or so for me right now.

The final name to know is freshman RB TreVeyon Henderson. Henderson had a nice game last week. He ran for 92 yards and added another 44 yards on 6 catches. He has been all that we hoped he would be and more. Henderson has shown power, quickness, balance, explosiveness, elusiveness, as well as an impressive receiving ability out of the backfield. He has to be the top RB in the 2024 class at this point.

The first guy to know in this game is my RB2 in the 2022 class, Isaiah Spiller. I have had Breece Hall and Isaiah Spiller as RB1 and RB2 for a while now. I like both prospects, but don’t quite think either is as elite of a prospect as some of the recent RBs we’ve seen. However, I still think Spiller and Hall have a chance to be impact backs at the NFL level. Spiller had a solid day last week, running for 112 yards on 21 carries. He did get a little dinged up, so we’ll see how that may impact him this week.

The other player to note for the Aggies is their TE, Jalen Wydermyer. He’s been my top TE for a while, and I don’t think that will change. There’s quite a lot of momentum around Colorado State’s Trey McBride, but I have him just behind Wydermyer. They are both big, physical, athletic, matchup nightmares for opposing defenses. However, I think Wydermyer is a little better of an athlete. Jalen is coming off a 5/53/0 game last week against a good Auburn defense.

The main player to know for Ole Miss hasn’t changed, it’s still QB Matt Corral. He isn’t quite at 100% right now and hasn’t really been all season. Corral is still my QB1 right now, just barely ahead of UNC’s Sam Howell. He’s got a big arm, plenty of athleticism, and has displayed good accuracy. There isn’t a consensus top QB in this class. Pittsburgh’s Kenny Pickett has risen up draft boards dramatically of late. Liberty’s Malik Willis is another guy that could end up being the top QB selected.

On the Notre Dame side of the ball, the names have stayed the same. The first is RB Kyren WIlliams. He has been the best offensive weapon for the Fighting Irish this year. Williams had another impressive game last week against Navy. He ran for 95 yards and 2 TDs on 17 carries, while also adding 36 yards and another TD, on a team high 6 receptions. I think Williams has a chance to be one of the bigger value picks in both the NFL draft and rookie drafts. He has the ability to be a 3-down back, so if he gets in a good situation, the sky’s the limit. He’s my RB3 right now.

The other name to know for Notre Dame is Michael Mayer. He actually had a mediocre day last week, only catching 4 passes for 28 yards. However, he’s been their top receiving option all year, and I don’t expect that to change this week. Mayer is a mismatch nightmare for defenses, and should become an impact TE in the NFL. He still has at least one more year in South Bend, so we have to wait a bit, but he’s absolutely a name to know for 2023.

The name to know for the Cougars is still RB Max Borghi. He’s dropped a long way since the beginning of the 2020 season, but there’s still some hope for him yet. Borghi is coming off a mediocre game with 67 yards rushing on 12 carries. There’s a lot going on in Pullman, but Borghi is someone I’ll be watching closely in this game. I think in the right situation he could be a value pick.

Unfortunately, the top fantasy prospect for Oregon is out for the year. However, if you’re up late watching #Pac12AfterDark, there still is a name to know. Travis Dye has stepped in nicely for CJ Verdell and is carrying the load for the #3 Oregon Ducks. He’s also currently leading their team in receptions and second in receiving yards. I think Verdell is still the top NFL prospect, but Dye is proving to have a lot of versatility, and could potentially be a late round guy.

That’s it for this week’s games. As I previously mentioned, if there is anyone you’d like me to take a look at, or want to share your thoughts on anything dynasty related, hit me up on Twitter ( @tristancook_ ). Also, check out tape on some of these guys in the Dynasty Nerds’ Film Room. And, if you’re interested in joining the #NerdHerd? Use the code “tcook” for 15% off any membership. Sign up here and get an edge on all of your league mates today! You can get access to the DynastyGM tool (including our Trade Calculator and new Trade Finder), the Prospect Film Room, an extra weekly podcast, full rankings, and much, much more!

Flexy and I Know It: Start/Sit Week 10
Dynasty Impact: Odell Beckham JR signs with the Rams