Is DeVonta Smith a buy, sell, or hold? @EmPoweredFF takes a dive in the second year WR. 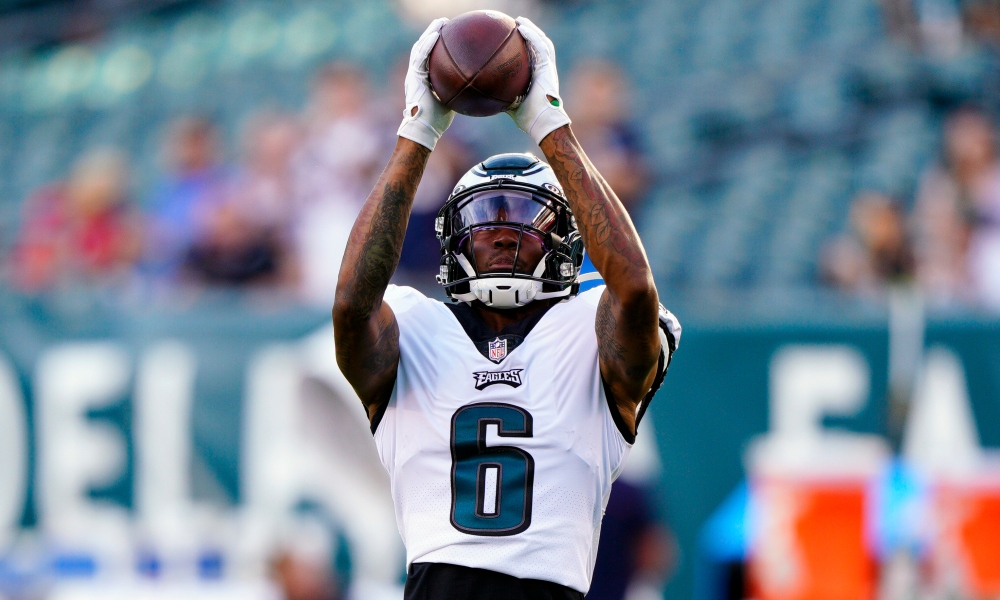 We consider former 2020 First Heisman winner DeVonta Smith from a buy, sell, or hold perspective. We looked at his college production profile, 2021 rookie campaign, and general strengths to evaluate this. At 6’0, 170-pounds, Smith was drafted out of Alabama with the tenth pick in the first round of the 2021 NFL draft by the Philadelphia Eagles. Easy-handed wideout Smith has excellent short-area quickness. He has fantastic footwork and spotless change of direction that gains him leverage on defenders. And as a route-runner, the guy washes people.   He is that good of a technician; he’s always open. And he has excellent hands to boot.

Blazingly fast at 4.4 seconds in the 40-yard dash (82nd percentile), DeVonta Smith’s college production profile is fantastic. Smith had a 20.9 Breakout Age, a 47.3% College Dominator Ranking, and a 35.8% target share during his time in the SEC at Alabama.

In 2018, Smith began to show signs of elite production. He finished the season with 42 catches, 693 receiving yards, and six scores, despite competing with and outpacing Jerry Jeudy, Henry Ruggs, Irv Smith Jr., and Jaylen Waddle. When he came to Alabama with Ruggs and Jeudy, the consensus was that Ruggs was the speed guy, even though Smith kept up with him, Jeudy was the route-runner, and Smith had the best hands.

Smith erupted in 2019 to lead Alabama in receiving, hauling in 68 catches for 1,256 yards and 14 scores—besting first-round draft picks Jeudy and Ruggs. Against Old Miss in 2019, he set an Alabama single-game receiving record with 274 yards and an SEC record with five touchdowns.

Smith produced all over the field at Alabama in 2020, playing in the slot on 35% of his snaps while moving across the formation when split out wide. Smith excelled downfield, leading the country with 589 receiving yards on catches beyond 20-yards. In 2020, he became only the third pure wideout in NFL history to win the Heisman award in over 30 years, following WR Desmond Howard in 1991. In addition, Smith was the first-ever WR to win the Associated Press Player of the Year in 2020. Smith was also the recipient of the Biletnikoff Award.

His college career also outshined Julio Jones and Amari Cooper as Alabama’s best receiver ever under Nick Saban. Smith was the first Crimson Tide WR to have multiple 200-plus yard performances in a single season since Amari Cooper in 2014. Smith finished No. 1 at Alabama in career receptions (235), receiving yards (3,695), and TDs (43). He also led the nation in receptions, receiving yards, and touchdowns.

He has been relatively durable. Even in college, he missed just two games in 2018 with a hamstring strain, left a game early in 2019 due to a shoulder/arm injury, and went injury-free until a freak finger dislocation cost him the second half of the National Championship Game in 2020.

If a player excels like this in college, there is always hope that the skills translate to the NFL field.

Even in a Nick Siriani offense, where 51% of the game goes to the run, they have relied on Smith. There is much upside if Philadelphia improves its passing game and overall offense to include the passing game more and Smith. Hopefully, college quarterback Jalen Hurts improves. He is the sort of quarterback-proof receiver, given that Hurts is not precisely known for his prolific passing.

Smith is an alpha receiver and led the team in receiving yards and is highly efficient with the ball. However, some recency bias raises concern that being the alpha on this team doesn’t mean as much fantasy value as being an alpha on many other NFL squads. The lack of surrounding receiver talent could be the most prominent reason to dampen Smith’s fantasy ceiling.

While he’s not as fast as Waddle, as rugged as Chase, and not as big as Bateman, Smith gets the job done, arguably with the most efficiency. While he was not exactly consistent, he did have a solid rookie outing with 29% good games. Smith had similar yardage to Amon-Ra St. Brown and about a hundred yards less than Jaylen Waddle. Yet, he scored equal touchdowns to St. Brown and only one less touchdown than Waddle.

While he does not meet all the preconceived standards, Smith still performs at an elite pace. Despite his size constraints, he has shown that he can handle the NFL. He can beat defenders and handle pass coverage. He can just weave through seams between defenders and blockers to pick up huge chunks of yards.  And, he has never shied away from launching shoulder-first into defenders to gain an extra yard or two on each catch.

Smith can even better accelerate to the top speed without wasting a step. In addition, he is a smooth route-runner, which translates to his ability to make guys miss in the open field. Combine that speed, route-running, and YAC ability, and you can see how he’s made a career of turning routine slants into huge gains.

On top of that, he’s always had phenomenal hands, whether making challenging, contested catches or just making the routine ones. He has got that natural feel for jumping over and around defenders to pull in catches without getting bodied out.

He is the alpha of Philadelphia’s passing game and may see 140 targets in 2022. I think he will get the touches, and I love his potential. Teams that utilize Smith in the slot or give him clean releases project to carry the most success. Smith’s ceiling will increase if he is used as more than just a slot receiver as a flanker.

He has WR1 potential in him. If the Eagles play their cards right in the offseason and make some adjustments to the offense to incorporate Smith more into it, he should have an excellent year for the 2022 campaign. Over the next few years, expect him to be a star in real life and fantasy. He is a dynasty buy for me.

In a poll that received 587 votes, 69% of those polled indicated that we would see an increase in DeVonta Smith’s production in 2022, while 23% said he will have the same role, and 8% said his role may actually decrease in 2022.

Emily H. Lefco (@EmPoweredFF) graduated with high honors in a dual degree program at the University of Wisconsin-Milwaukee.  She has been a die-hard fantasy football manager and commissioner for 15 years now.  Emily has managed up to 63 winning teams out of 69 leagues – redraft, dynasty, keeper, IDP, TE-Premium, and Superflex – at the same time while serving as commissioner of over 15 dynasty leagues.

Her love for fantasy football derives from it being NFL-focused, data-driven, and research-based.  As a fantasy football analyst, Emily writes original fantasy football content for @fantasysixpack and @dynastynerds and appears on various podcasts. Soon she will co-host her own podcast, Hustlers Fantasy Football. Stay tuned for NFL polls, new articles, and the podcast!!