Why Haven’t You Picked Me Up Yet?

QBs are king in Superflex leagues – so why is Jacoby Brissett on some waiver wires? Or so cheap to acquire? 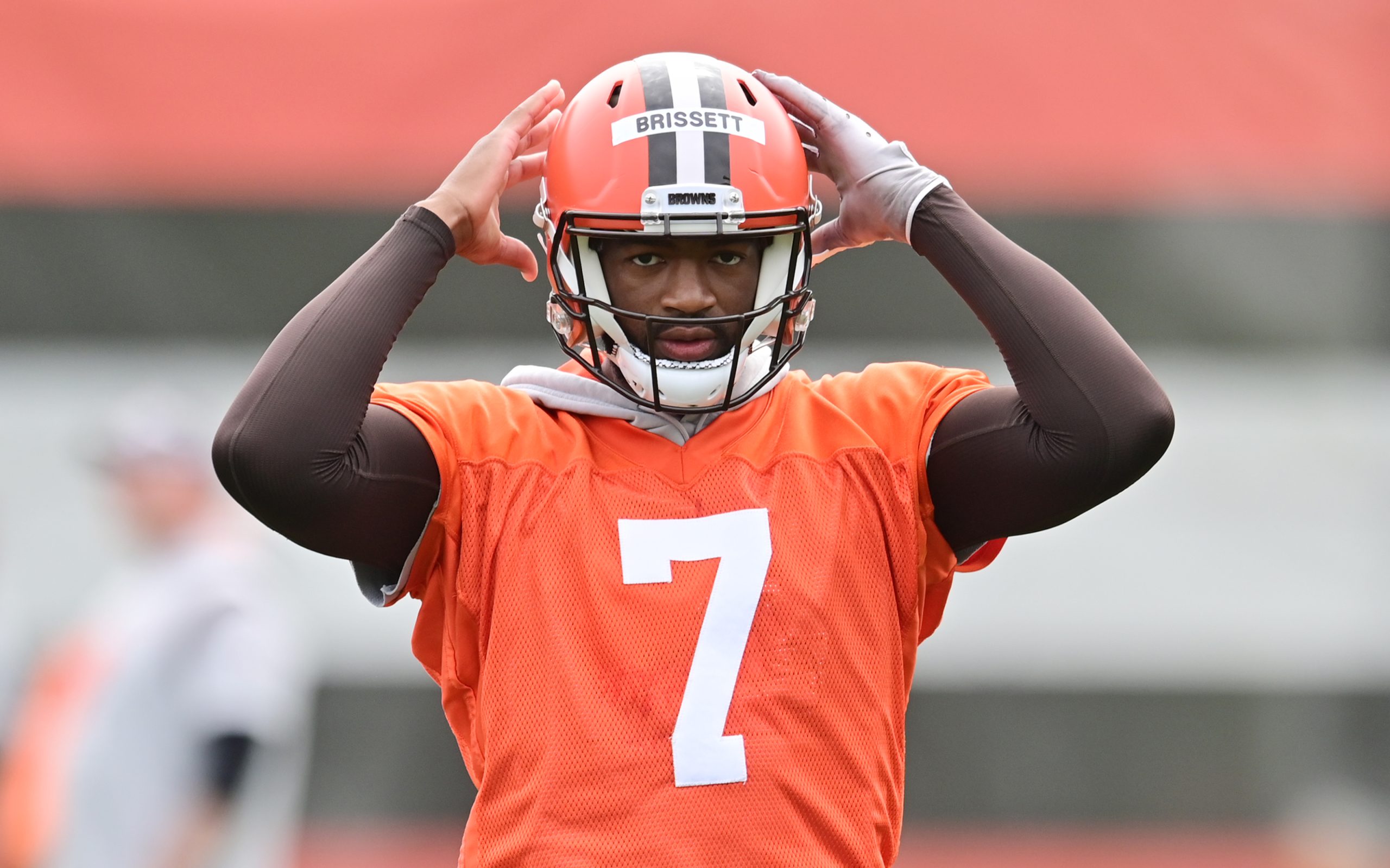 It has been repeated time and time that in Superflex leagues, the quarterback is king. Even a low to mid-range QB2 can be an asset to your starting lineup weekly.  With all the news swirling around new Browns QB Deshaun Watson and his likely suspension, I have noticed a strange phenomenon, Jacoby Brissett is still floating on some waiver wires. Could there be a better gift than picking up a starting QB for free? I certainly don’t think so. This article will cover just a few quick points on why I believe Brissett could be an excellent addition to your team and why, if he is a free agent in your Super-Flex leagues, you should run to the wire and pick him up immediately.

As I mentioned above, it seems to be a Fait accompli that Watson will be given a lengthy suspension on the heels of his recently completed NFL personal conduct investigation. Now I’m not here to judge what Watson may or may not have done in his personal life. If we were considering the personal character of players, we would be denying ourselves several high-end players. What concerns me as a fantasy and dynasty analyst is that I will be missing Watson in my lineup again on the heels of sitting out all of last season while dealing with investigations and contract disputes with the Houston Texans.

The NFL recently wrapped up a thorough enough investigation and litigation that took place over a substantial amount of time. A verdict on a likely suspension should be forthcoming in the near future.

Deshaun Watson ruling may still be weeks away. Expect a written ruling, maybe 20 pages or longer, that is released to the media. Basically, the exact opposite of what the league did with the Commanders investigation. https://t.co/MzbZXwdvDB

Brissett is a former New England Patriots third-round pick. Tom Brady’s former understudy has enjoyed an Illyad-like journey through the NFL after starting a couple of games during the Patriot’s last Super Bowl season of 2016. After winning a ring as a backup in New England, Brissett was traded to the Indianapolis Colts for former first-round WR Phillip Dorsett to fill in for their former QB Andrew Luck, who missed the entire 2017 season.

Dorsett was thrust into an impossible situation in Indianapolis and played admirably despite the team’s lack of success. He would revert to backup status when Luck returned in 2018 before assuming the mantle of starter when Luck inexplicably retired in 2019. This would be Jacoby’s best season of his career. While the numbers weren’t overly special, he certainly looked the part of an NFL QB. He spent one more season in Indy as a backup to future Hall-of-Famer Philip Rivers before spending a year in Miami helping mentor Tua Tagovailoa in his rookie season. You can see his career stats below.

Heading into the 2022 season, Brissett looks to be the last man standing for the Browns. While he will certainly not be confused for an MVP, he has some nice skills. As you can see from the play below, he is very mobile for a big man. Notice how he keeps his eyes downfield as he navigates the pocket allowing his wide receiver to finally flash open.

This is a very Luck-esque play by Jacoby Brissett. Always thinking pass first, even on the move.

At this point in his career, Brissett brings a veteran’s presence to the huddle and would be a stabilizing force in the locker room and huddle in the event of a Watson suspension. Despite not being overly prolific in his game, he has been cautious with the ball throughout his career. He brings nice touch and ball placement as well. Look at his perfect ball placement on the pass below from last year in Miami.

Jacoby Brissett is 8 for 8 passing. pic.twitter.com/J3f4KV1trN

Size is another asset in Brissett’s arsenal. The former North Carolina State star stands at an imposing 6’4” and 235 lbs. This allows him to find all of the throwing lanes in a manner that was more difficult under former starter Baker Mayfield. It also allows him to take hits and be more willing to step up into the pocket, as you can see below.

Jacoby with the TD

Don’t get me wrong; I’m not saying Brissett will be a QB1 or anything close to that. However, he is in line to be a starting QB for part or all of the 2022 NFL season. That is a meaningful asset to have on your bench in your SF leagues. For instance, last season, the 32nd highest scoring QB on points per game basis averaged 15.082 points per game. That player just so happened to be Baker Mayfield. That average score is higher than players worth far more than Brissett, such as Marquise Brown, DeAndre Hopkins, DK Metcalf, Michael Pittman, Clyde Edwards-Helaire, Michael Carter, AJ Dillon, and many many more. The main point is that QBs are far more likely to put up a decent score in your flex spots than your WR/RB4.

The best part about betting on Brissett getting meaningful playing time is his price. One of the amazing tools we have to offer at Dynasty Nerds is our Trade Browser. You can enter any player and format into the equation, and it will show you real-time trades taken from actual dynasty leagues. Entering Brissett into the machine and you will find some dirt cheap prices, even for SF. You can see a couple of them below.

Another angle people can try to work with Brissett is to pair him up with Watson. As I said previously, we are not here to make moral judgments against players. If you are an owner that does that, more power to you. However, this is a game we are playing, and if you want to win said gain, the object is to get points and value. Some owners are terrified about the prospect of a long Watson suspension. You can mitigate that risk by also acquiring Brissett as a hedge against any missed time.

Do not go into this type of move believing that Jacoby will replace the point total you will get from Watson, but he will provide a bridge QB2 type of player. I recently moved to acquire Watson on one of my dynasty teams. Brissett was on my bench, so I knew I would have that in my back pocket. I traded Joe Burrow and Jimmy Garoppolo in exchange for Watson and Kirk Cousins. With this move, I took on all the risk on the front end while getting a massive upgrade on the back end. Despite his lofty current value, Burrow only outscored Cousins by a single point per game last year.

To make a long story short, if Brissett is still available for cheap in your home league, quietly acquire him before it is too late. I have personally been beating to drum for this for some time now. Timing is everything in dynasty. The name of the game is buying low and selling high. It is critical that you get Jacoby before the NFL hands down its Watson suspension.  Worst case scenario, you will be able to acquire a draft pick for him from the Watson owner when news of the likely suspension comes down. While not a long-term asset for your team, Brissett should have a place on your bench.

Thank you for reading this article! Please be sure to join the #Nerdherd, so you don’t miss out on any of the amazing things we have to offer at Dynastynerds.com. Use my promo code DynastyHolliday for a 15% off discount. You will get rankings, extra podcasts, and access to our rookie film room. You can get access to our revolutionary DynastyGM tool for just a few bucks more. So much for so little; why miss out on all the fun. Also, you absolutely must check out our new mock draft tool. Find it in your Apple & Android app stores. Follow me @ReflipeWThenuz for more dynasty content and other musings.