Why Zach Wilson could make a huge leap in 2022

With Robert Saleh having coached a whole year going into next, a revamped offensive line, Elijah Moore back from injury, and potentially more weapons, Zach Wilson will have all the tools to make a giant leap in real life and fantasy football next season. 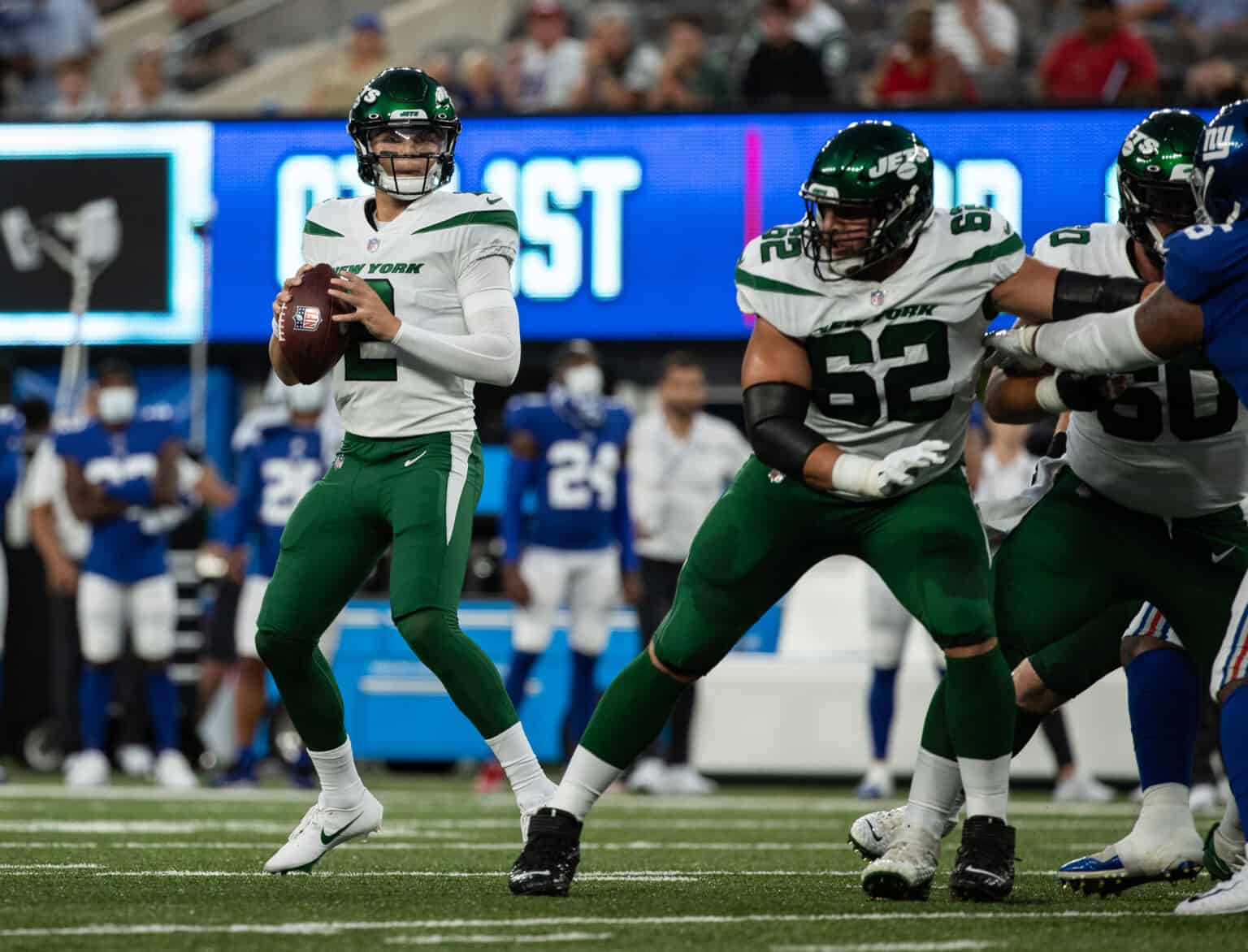 Zach Wilson was unknown throughout his first two years of college, but everyone knew his name after his stellar final college season. He threw for 3,692 yards and 33 touchdowns and added another 254 yards and ten touchdowns on the ground. After his 2020 season, he was immediately in the round one draft capital conversation. He was selected second overall (one of the five QBs drafted in the first round) by the New York Jets, and his NFL career began!

Wilson (and the Jets as a whole) had a rough 2021 season but showed flashes of promise. Wilson missed four games with a sprained ligament in his knee. He finished the season with 2,334 yards and nine touchdowns, with 185 yards and four touchdowns on the ground. Wilson had a very rocky season – especially in his first six games, where he threw nine INTs and only four TDs. He did, however, turn it up a notch when he returned from his injury. In weeks 12-18, he threw five TDs and had just two INTs during that span. Having a rushing upside is almost crucial in fantasy football nowadays. Wilson showed his rushing ability in the final seven weeks of the season. In those games, Wilson ran for four touchdowns and averaged 7.7 yards per carry (163 total rushing yards), including a huge 52-yard rushing touchdown in Week 16.

In comparison with the other 2021 (first round) rookie QBs

2021 was a rough year for all the first-round rookie QBs in fantasy football. Here are the fantasy football finishes for them: QB30 (Wilson), QB23 (Trevor Lawrence), QB31 (Justin Fields), QB40 (Trey Lance), and QB18 (Mac Jones). Jones was the most fantasy-relevant but was also drafted to a great system with a great head coach. Lance had a similar situation but only started two games as the 49ers favored Jimmy Garoppolo. Lawrence and Fields had coaches fired this offseason, and Wilson had a first-time head coach, Robert Saleh. My point here is, don’t write off a rookie just because of their rookie season. Wilson had a bit of a rocky year, but the Jets can take partial blame for that.

Wilson got things going in the latter half of the season, even without his top target Elijah Moore (who missed the last five games due to a quadriceps injury). Moore led the Jets in total targets this year (77) despite missing six games of the season. Like Wilson, Moore started to get going during the second half of the season. From Weeks 8-13, he averaged 5.6 receptions & 76.5 yards per game (including five total touchdowns) before missing the remaining five games due to injury. Moore is a young, talented receiver and can become an excellent WR1 for the Jets.

The Jets are very committed to Wilson and getting him more weapons. They were heavily involved in the Tyreek Hill sweepstakes and were reportedly making calls to Seattle about D.K. Metcalf’s availability. They currently have two top-10 picks (#4 and #10) in the draft this year, and many mock drafts have them drafting a receiver at the tenth spot. This is a very deep class of WRs, and the Jets will likely be the first to take one. Pairing a player like Garrett Wilson, Drake London, or Treylon Burks with Moore would enhance this offense and be great for Wilson’s real-life AND fantasy value.

How was the Offensive Line?

The OL was a massive issue for the Jets last year. The line allowed 53 sacks, the fourth-highest total in the entire NFL in 2021. Wilson was constantly in a collapsing pocket, as the Jets were third in total pressures allowed (186) as per pro-football-reference. They were missing Mekhi Becton for almost the entire season in their defense. This off-season, they have improved the O-line, which will benefit Wilson and the Jets’ offense. New York signed Pro Bowl guard Laken Tomlinson to a three-year deal, Becton is expected to return fully healthy for training camp, and Vera-Tucker will have some more time to build chemistry with the team after having a great rookie season. George Fant and Conor McGovern will also be returning for next season. This offensive line is looking to get a lot better, and New York may also be drafting some more talent. The Jets have nine picks in the 2022 draft (including four in the top 38), and they could bolster the O-line even more with this deep lineman class.

Yes, Wilson and the Jets had a rough time last season. However, he showed flashes of why he was drafted second overall and considered the franchise staple. Moore and Michael Carter (current starting running back) showed spurts of great play. With Saleh having coached a whole year going into next, a revamped offensive line, Moore back from injury, and potentially more weapons, Wilson will have all the tools to make a giant leap in real life and fantasy football next season. If the Wilson owner in your league is unsatisfied with what the QB showed this past year, make them an offer! Wilson is a huge buy this off-season and has everything in place to start flourishing in 2022.

Did you hear the big news? The Dynasty Nerds YouTube channel is up and running. Now you can see the podcast straight from the NerdHQ!! Smash that subscribe button! Sign up for the DynastyGM tool to keep that edge over your league mates. Manage all of your dynasty teams, use the trade calculator, and we just added a player shares tool so you can see all players you roster in one place.