2 Wide Receivers to Target in Trades

As the offseason continues @FF_Worm takes a look at two wide receiver trade targets that will boost your team heading into the 2022 season. 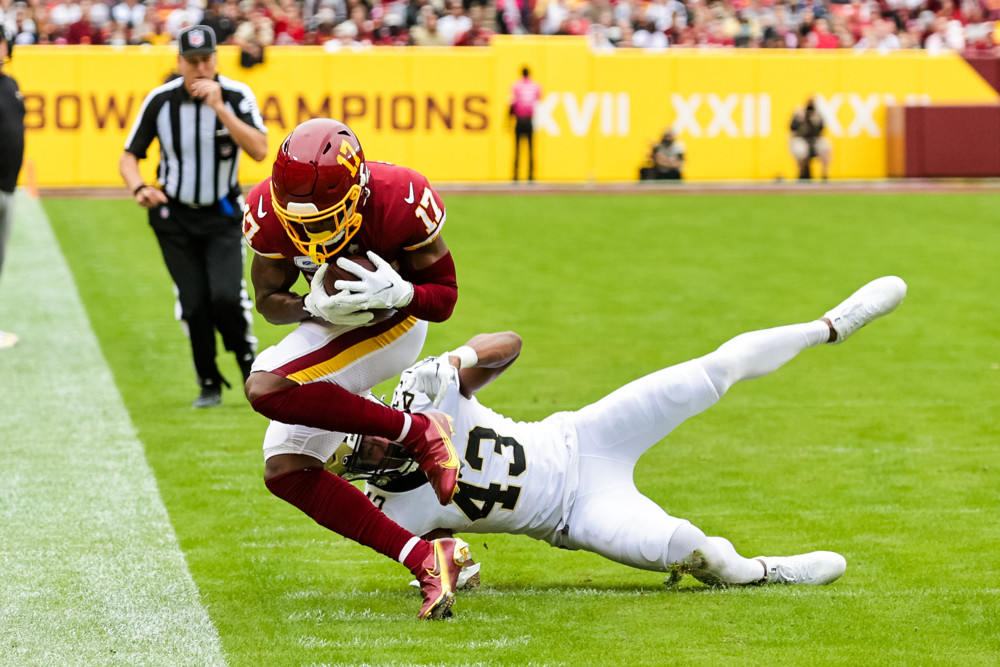 It has been a long offseason in the football world. The NFL draft is behind us, and rookie fever is settling down. We are currently in that calm before the training camp storm—the quietness before training camp highlight reels dominate the fantasy football world. Players will be hyped up, while others may appear to lose value. Before the frenzy ensues, let’s enjoy this lull in action and news to fire up some trades. This article will dive into a couple of wide receivers trade targets.

After a solid rookie year, putting up 64 receptions, 916 yards, and five touchdowns on 104 targets, there was a lot to be excited about for the former tenth overall pick heading into year two. Those feelings of joy and happiness were abruptly halted when the Philadelphia Eagles traded for star wide receiver A.J. Brown. What was once thought to be a clear path to stardom, is now believed to be no better than a back-end WR2.

While the Brown signing no doubt puts a cap on Smith’s ceiling, there is no better time to buy this great wide receiver. Yes, I said great. According to PlayerProfiler, Smith had 2.16 yards per route run (YPRR). This would rank him 15th among wide receivers. This metric is heavily correlated to fantasy football success as it is a good indicator of players likely to excel. Additionally, he ranked sixth in air yards share, sporting a 38.9% mark, which was better than elite players such as Ja’Marr Chase, Stefon Diggs, and Tyreek Hill. And if this isn’t enough to convince you, Smith had an average depth of target (aDOT) of 14.4 yards. This is exactly what fantasy managers want to see when

With Jalen Hurts expected to take the next step and level up his game, Smith is being wrongfully undervalued. With Brown there drawing the top corner and the Eagles wanting to throw the ball more, Smith is a prime candidate for a big year two.

I know what you’re thinking. McLaurin has never finished inside the top 20 in any season. While this is true, it is even more of a reason to go out and buy him. People are discrediting just how good McLaurin is; therefore, he can be acquired at a discount.

The soon-to-be 27-year-old WR is currently in his prime and has been nothing short of elite. The only thing missing was a competent QB. Now I know Carson Wentz isn’t the stud QB from whom we all had hoped McLaurin would be catching passes. However, he is a clear upgrade over Taylor Heinicke.

McLaurin has had back-to-back seasons of at least 1,000 yards and 130 targets. On top of that, he ranked second in the league with a 41.8% air yards share. When that ball is in the air, it is most likely going in McLaurin’s direction. With blazing speed, savvy route running, and a knack for locating the ball in the most difficult situations, McLaurin is valued as a mid to low WR2. This is a screaming value for a wide receiver who can legitimately finish in the top 15.

When it comes to buying in dynasty, many factors influence the decision on which player to buy. Stats and performance aside, deciphering whether the team is truly a contender or should start the rebuild process is important. Both wide receivers can fit on any team. Smith, just 23 years old, has years of production ahead of him, while Terry, a bit older, is still at peak performance and should continue for a few more years. Both are great talents that can contribute right away. In fact, they each could see career years this upcoming season.

If you’re not a #NerdHerd member, sign up using my special promo code ‘FFWorm’ to receive 15% off any site membership. If you enjoyed this piece, look for more content on my Twitter @FF_Worm.  Feel free to tweet or DM me for any questions, comments, or general fantasy football talk.