Will Darnell Mooney Be the Hero of the Bears’ Offense in 2022?

Darnell rose to the occasion in 2021 as the new WR1 of the Bears, but can he take another step forward in 2022? @DarthDbacks has projections for Mooney. 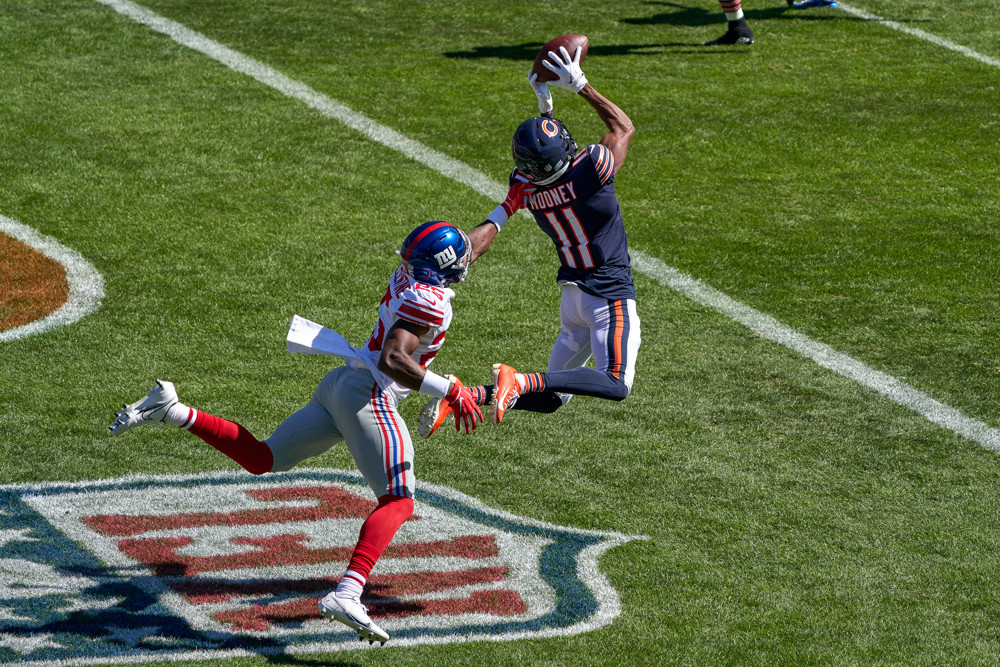 In the 2021 season, Darnell Mooney took the reins of the wide receiver room in Chicago and never looked back. He established himself as the dominant man who deserves most of the targets from the young quarterback Justin Fields. The Chicago Bears are in flux with a new head coach, offensive system, and running mates at wide receiver. The Bears hired a new offensive mind with Luke Getsy from the Packers. He’s focused on making the Bears’ offense better than last year, not that it’s hard to do considering how awful it was. The focus will be on ensuring Fields is a viable NFL quarterback. That’s where Mooney figures in. They’ll target him since he’s the only NFL starting-caliber wide receiver on the Bears. So, can Mooney carry the offense? Will he reach that WR1 tier after being a WR2 in 2021?

Mooney finished as the WR23 on the season in PPR leagues. He played in all 17 games and averaged 12.9 ppg. Playing opposite an absent Allen Robinson, Mooney started 14 games and saw 140 targets. He caught 81 of them (57.9%) for 1,055 yards and only four touchdowns. Darnell did rush six times for 32 yards and a touchdown. He led the team in every major receiving category. It was a breakout year for Mooney. One that the Bears hope continues. With the flurry of different quarterbacks that started games last year, it makes sense why Mooney struggled with the catch rate. In his rookie year, he caught passes at a higher 62.2% rate. I’d expect the number to rise with a single quarterback this year. Although his nine drops last year will need to come way down.

He returns as the WR1 of the Chicago Bears in 2022. Mooney will be leading a room of jags and rookie Velus Jones. Jones is better suited for kick-off and punt returns but will see receiver work. Regardless, the Bears’ offense will be looking to get Fields moving around the pocket behind a woeful offensive line. Expect quick passing plays and a large percentage of passes going Mooney’s way. Since Mooney proved he was a successful rusher, don’t be surprised if he gets 7-10 rushes again as a way of keeping the playcalling mixed. This is a transition year for the Bears, so limit your expectations on the offense. Cole Kmet is in the mix for targets and will get them with his big offseason.

As seen above, Mooney will have another great season with over 100 targets. His catch rate will be comparable to 2020, with this year being around 60.6%. It might get higher if Fields improves his accuracy. The yards will be rising once again as he gets more targets. The touchdowns are the true wildcard. If he gets closer to ten or more, he could reach the WR1 tier. Overall, he’s the WR17 on my big board for the season and WR23 in PPG at 14.7 PPR ppg.

I’m buying Mooney all day long. He’s going to get a supremely high target share which is the most significant part to getting tons of fantasy points. He’s the focal point of the Bears’ offense, making him extremely valuable. Add in the fact that he’s entering his age-25 season and has not even hit his prime yet. Mooney is a strong player to have in a dynasty. On a contender, you could get him to be your WR2/3 and have a stacked wide receiver corp. Buying him will take at least a mid-first-round pick and a likely early second-round pick. It could be two firsts if the buyer is a big believer. However, Mooney has proven to be an NFL-caliber starting wide receiver. It’s worth paying that price. Rebuilders should wait a few weeks before selling extremely high.

As he grows with quarterback Justin Fields, Mooney becomes an elite fantasy wide receiver. The Bears have made him their focal point of the offense, which should excite dynasty owners. He will be among the target leaders this season. If he can rein the drops in and complete more catches, he could finish as a WR1. Buy him now before it’s too late.

Do you want to become the best dynasty player you can be? Be sure to use my promo code “Darth” for 15% OFF your subscription to Dynasty Nerds! It makes it only three dollars or so! Connect with me on Twitter @DarthDbacks. I love to talk football, baseball, movies, shows, Star Wars, Marvel, and interact with the fantasy football community. For more articles of mine, click here.