The Dynasty Nerds is back with Round 2, 1QB style. 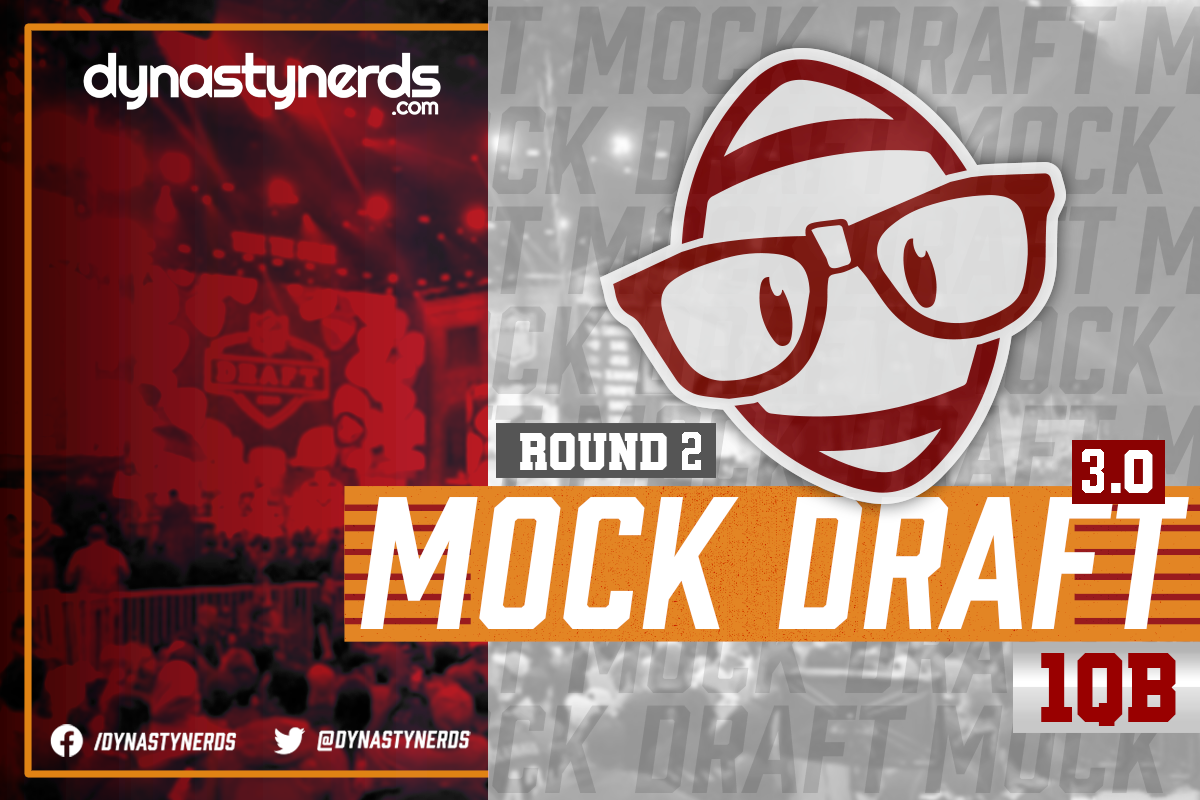 Welcome back for Round 2 of the Post Combine 1QB Rookie Mock draft. Round 2 is where the depth starts to show up. One of the axioms we preach in fantasy is to not overreact to things like the NFL Combine. Let’s take a look and see if the Nerds team was able to put news aside.

Dotson built off of each season in his four years at Penn State. After posting 91/1182/12 as a senior, Dotson created a buzz. With a stellar Senior Bowl and Combine, Dotson will likely be a 1st round pick in the NFL Draft. A value at 2.01

Christian Watson seemingly came out of nowhere. Hailing from North Dakota State University, I doubt he was on many people’s radars for fantasy relevance. But then, he dominated the Senior Bowl and was widely considered the stand-out performer for the week. Now, he’s followed that up with being arguably the biggest winner at the NFL Combine. Plain and simple, the guy is a freak. He’s huge, he’s fast, he’s explosive. I am curious to see how high he is taken in the draft and where he lands. It could take some time for this pick to pay off because I don’t think he’s a very polished player at this point coming into the league. But I’m swinging for upside here, and with Watson, it’s immense.

I decided to go for the upside with this selection. While Malik Willis likely sees the field last amongst this year’s crop of rookie quarterbacks, the rushing upside makes him worth the wait as an investment. The NFL off-season is shaping up for him to fall in the first round of the NFL Draft, he may have a higher upside than Jalen Hurts, and no way I’m passing that up here.

Pierce is someone who I’ve been warming up on due to the community of trusted analysts that have been high on him. A mediocre combine (21 reps, 4.59 40) left me wanting a little more, but he has the vision behind the LOS, the YAC-ability, and the contact balance to make a decent starter for a few of the RB-needy NFL teams. Because he wasn’t used correctly in college, he still has plenty of tread left on his tires.

James Cook is a playmaker that’s fast-rising up my board. He didn’t get a ton of playing time over at Georgia or RBU. However, when he did touch the ball, he was electrifying with big plays and showcasing his ability to jumpcut, read, and make the correct decision while running the ball. Plus, he can even catch the ball too. The little brother of Dalvin Cook is making his own name as he looks to be drafted on Day 2. After a great combine, I’m willing to take the risk on him in the middle of the 2nd in a 1QB draft. He’s a potential RB2, and I didn’t want any of the QBs here.

Hype is a ton of fun this time of year, and as small school WRs go, Skyy Moore and Christian Watson have seemingly snatched most of the inertia that Jalen had generated before the Senior Bowl. Overshadowed at both the Senior Bowl and Combine by Watson, and despite hitting plenty of athletic thresholds himself, he also was outshone by Skyy at the Combine. I have no issue with both going ahead of Tolbert here. However, coming off an 82 catch, 1,474-yard campaign, it’s time to begin building the hype back up. Tolbert flourishes in the top third of the route tree, consistently abusing opposing defenders with double moves and hesitation breaks on vertical concepts. This deep route running proficiency, combined with his high-waisted, long-armed frame, gives me Davante Adams vibes coming out of Fresno State. Similar to Adams, I expect day-2 draft capital is coming for Tolbert. He has all the tools needed to develop into a WR1 for an NFL team. On second thought, let’s keep the hype quiet. Shhhhh.

At this point in the draft, I am looking for upside. To that end, I am taking a shot on Georgia RB Zamir White. The former 5-star recruit had moments of brilliance interspersed with injury. Nevertheless, when he was on the field, he was highly productive. He tested very well at the Combine, and I am betting on a Frank Gore type career where hopefully his injury woes are left behind in the College ranks.

I can’t believe you guys let him fall to 2.08. Many analysts had Williams in their top 5 pre-combine. After Williams ran a 4.65 forty is seems that he has been discarded to the scrap heap. Yes, he is undersized and maybe he doesn’t have the top-end speed we had hoped, but his pass catching chops are exceptional. He is a capable runner in spot duty as well. Repeat after me– Don’t overreact to the Combine.

At this point of the draft I am looking at the most upside. I had my eye on a particular WR here until I realized McBride was still available. He is by far and away my TE1 in this class. Even if I don’t need a TE, I take McBride here and flip him for a higher pick this time next year

I understand that Wan’Dale Robinson is not the biggest wide receiver, but I’m still a believer in his talent and ability. To provide some perspective, Wan’Dale ranks 4th in this class in Receiving Yards per Team Pass Attempt (2.60 p/g) and 3rd in Weighted Receiving Dominator Rating (32.8%). So while many were shocked by his Combine measurements, it does not change the fact that he is still one of the most productive WRs in the 2022 class. Production and draft capital matter much more than height and weight for a wide receiver. And assuming he still receives at least mid-day two draft capital, I will gladly take him in the late 2nd round of my dynasty rookie drafts if his stock continues to decline.

Brian Robinson will be getting better NFL draft capital than any of us think right now. I will not be surprised when he is a mid-day two pick and brought to a team to be part of a committee. NFL GMs and coaches trust Saban’s players, and Robinson will have a role in year one. He may only be deployed in short-yardage situations or goal-line work, but he will be active on gameday. Which means he will have immense handcuff value. Not a bad fantasy asset to grab at the end of the second round of your rookie drafts.

Metchie could end up as a steal in drafts. Before the injury, he was in line to be the next great Alabama receiver. He has solid route-running ability with enough slowed if he lands in the right situation.

Thanks for checking out Round 2. Drop a comment and let us know what you think. You can find Round 1 here.