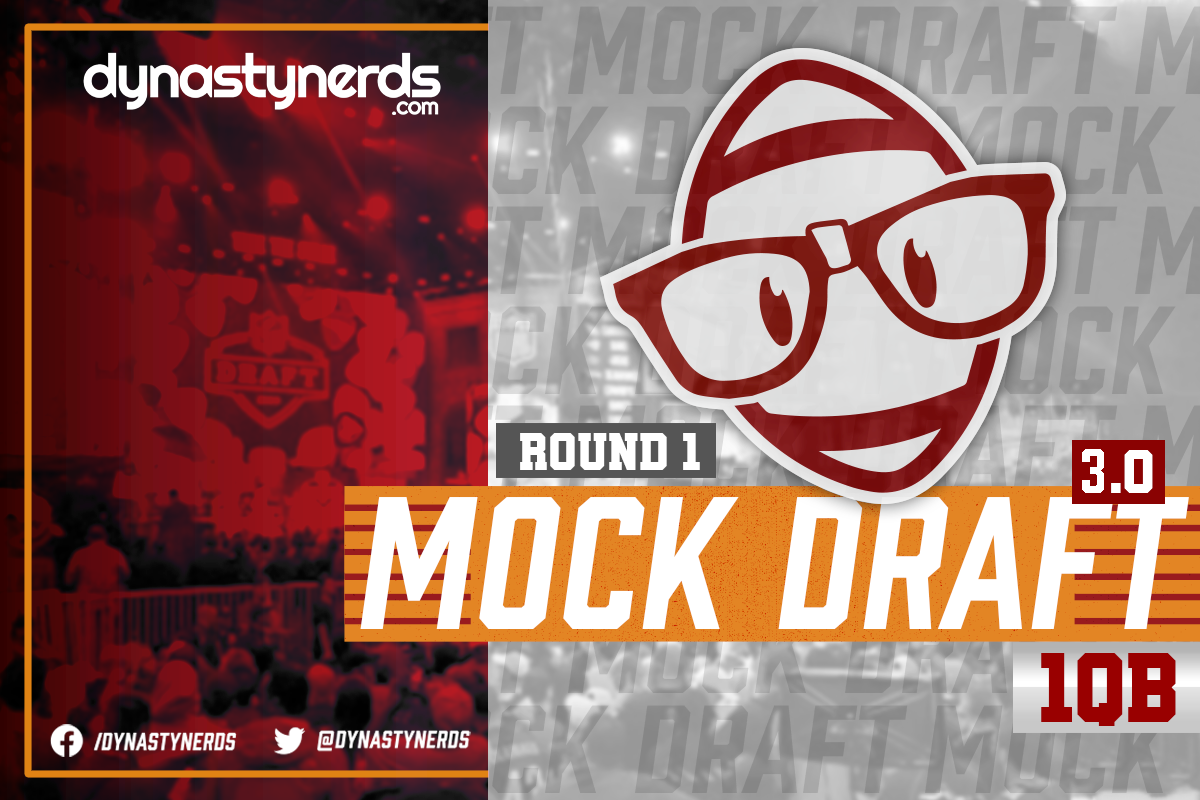 The NFL Combine is in the books. Some guys met expectations, while others disappointed. In and of itself, the NFL Combine should not drastically alter your rankings. What the Combine does though is provide some verified data points for assessment.

This draft will be 4 rounds as we dig deeper into the rookie class to get you ready for your dynasty rookie drafts.

Let’s jump into Round 1.

After three years at Iowa State, Hall proved to be a 3-down back and the ability to be a bellcow back. After lighting it up at the combine with a 4.39 forty and a 40″ vertical, Hall locked himself in as the 1.01 in 1QB leagues. Given the lack of strength of the QB class, Hall may vie for the top spot in Superflex drafts as well.

Coming in at 6’0 and 183 pounds at the combine was a little bit disappointing for Wilson, who I had hoped would be a little bigger. However, he also ran a lot faster than I expected, posting a 4.38 in the 40-yard dash. Wilson is, in my estimation, the most polished route runner in the class. He uses his elite burst and agility combined with great technique to consistently create separation. I thought a lack of top speed might limit his upside, but that doesn’t appear to be the case. This makes Wilson by far the most complete WR prospect in the class, and I’m happy to take him here at 1.02.

I watched some film on Michigan’s Daxton Hill and shouted, oh my goodness. I couldn’t even fault Hill for missing the tackle. That move that Kenneth Walker put on him was dirty. Kenneth Walker blew away the 40 time by running a 4.38 at the combine. An argument can be made for him going 1.02. To get him at 1.03, I’m very excited.

The combine was not Burks‘s best athletic performance, but the game film speaks for itself: the kid can ball. Although I was expecting a quicker 40 time, it’s still a very good time for his size. With his play-style in college, it is sometimes easy to forget that Burks is 6’2 225. If you’re jumping off the Burk’s train because of a 3-cone, you must not have learned your lesson from 2019.

Yes, he suffered a broken ankle. No, I don’t think that will affect him long-term. He caught 88 passes, 7 TDs, and 1,084 yards in the eight games before getting hurt. London was doing better than Jameson to that point. Yet, people are forgetting him right now. The dude’s a massive stud that will be great in the NFL. A WR-1 potential player at #5, I’ll take that.

Olave’s Combine performance has validated what the tape already shows; his combination of speed, acceleration, and deceleration creates a terrorizing deep threat. Olave is a precision route runner and, with his 4.39 forty, has solidified himself as a safe bet to go in the first round of the upcoming NFL draft. However, my perception is that many of Olave’s best traits will require a competent signal-caller to unlock. He may be one of the more landing-spot-dependent prospects in this year’s class. Pick 1.06 feels like the median range for Olave currently in 1QB drafts, potentially with the supporting cast being the ultimate factor that could move him marginally up or down from this spot.

At 1.07, I will select the last member of my top RB tier. Spiller disappointed at the combine when he declined to run the 40. He later revealed he was dealing with an injury. I am going to rely on my film study with this one which showed Spiller to be a dynamic underclassman who possesses all the necessary traits to be a successful RB in the NFL. I see some Josh Jacobs in his game and am happy to get him here.

There is some uncertainty after the top three RBs. I chose White here as he has a three down skillset. White rushed for 1000 yards and caught 43 passes as a senior in just 11 games. He plays fast and finishes runs well. While he is a good pass catcher, he could use some improvement on his pass protection.

Jameson Williams was the potential WR1 of this class prior to tearing his ACL. He may not be a WR who provides an immediate return on investment, but at 1.09, this is quite an incredible value. In the long run, I think he will be well worth the wait. His breakout age, dominator rating, early declare status, and expected draft capital put him in a category that correlates with a high hit rate. The only concern I have about Williams is he is quite skinny. I don’t put a lot of weight into BMI (pun intended), but 6’1.5″ and 179 is a bit light for an NFL WR. I have some concerns about his ability to battle with more physical corners in the NFL.

After his combine performance, David Bell’s stock may be on a slight decline. However, we cannot disregard how productive he has been even with his “below average athleticism.” In his three seasons at Purdue, he averaged 31.4% of his team’s receiving yards while leading this class with an impressive 4.53 yards per first down. Draft capital is what ultimately matters, with Bell currently projected as a 2nd round draft pick. Assuming he maintains that draft stock, I will likely rank him as a top-6 wide receiver in this deep and talented class.

Closing in on the end of the round, I selected a player who was at one point the WR1 in this class. Pickens has looked great recovering from his torn ACL, and any team would be lucky enough to take advantage of any sort of discount. I fully expect Pickens to recover his freshman year form as we approach a full year post-injury.

Sky Moore put himself in the round one after a strong combine. The Western Michigan receiver took major steps in his third season with over 1200 yards and 10 touchdowns. Moore will bring speed and quickness that should translate to the next level and be a strong fantasy asset.

What did you think?

Drop a comment and tell us what you think? Did anyone over-react to the combine? Who got the biggest steal in Round 1? We would love to hear from you.

Be sure to check out the post Combine Superflex also.