Jameson Williams put on a stellar season according to the stats, but are the stats misleading? Is he as good as he seems to be? Will the Torn ACL affect his dynasty stock? @darthdbacks has all the info! 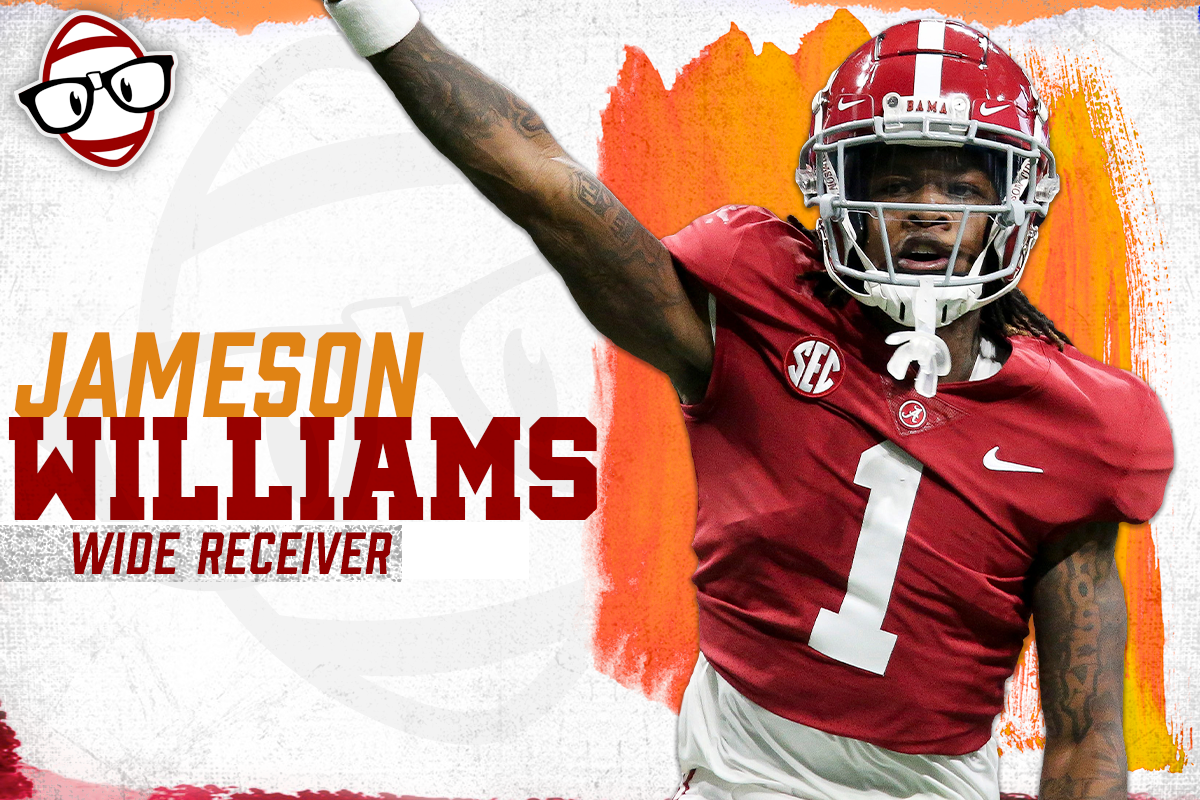 I hope this isn’t a shock to the system when I say that Alabama had yet another terrific season in 2021, again led by extraordinary WR play, among others. What might shock you, though, is that the player that, in my opinion, played the best on their offense hadn’t done much in college before this year. That player, as you probably know, is Williams. He was the gem of QB Bryce Young’s eyes. Williams excelled in Alabama as a deep threat and roving target. He racked the YAC and consistently found his way to the end zone.

The next closest Alabama WR was John Metchie, with 1,142 yards in terms of yards. Metchie did have more receptions but at much shorter yardage. It would seem that Williams just needed some more playing time/better coaching to prove he could be a college WR1. However, he couldn’t rise in Ohio St. does give some worry. Let’s look at the tape for some answers.

Film Review with a Dynasty/NFL twist

Before we get started, I just wanted to highlight/overview what the films below will show. Jameson Williams is an excellent WR with a lot of room for improvement. His run blocking is atrocious, as is his effort level on plays he isn’t getting the ball. I saw a low of that. However, he possesses elite speed that allows him to get past the safety with ease, and while he can lose concentration on catches a bit too often, he has some solid hands. Additionally, he’s a YAC monster and can usually get off the line with the same but solid release.

Here, in the game versus Georgia, 2021, we can see just how fast a YAC monster Williams is with a 67-yard reception TD. He blows past the corner covering him and then breezes past the trailing safety who misread the play. It’s beautiful, and that’s the type of play that makes your saliva grow thinking about him doing that for your dynasty team. It’s excellent route running and is one of the best clips of Williams at his best. Finally, it showcases how good he is against zone coverage, and you can’t play zone against him.

In the clip above, you’ll see something that irks me, especially after watching the 49ers and Rams play lately. It’s the lack of effort/concentration, or what have you, that Jameson too often falls into. This is true, especially when he’s called to run block or help his fellow WR get a few more yards. I saw far too much in the film I watched of him just standing around, walking, or even turning in circles while defenders run past him. It was honestly irritating and is something that if Jameson ends up on the Patriots, he’ll get benched for.

That doesn’t make my dynasty team happy. If a coach has to pull you off the field, that’s less playing time which can easily lead to fewer fantasy points. Hopefully, whatever team he ends up on molds him into always giving it his all, or at least trying to. In today’s NFL, WRs get asked to do a bunch, especially blocking. I want my WR to be able to block.

Now, in the clip above, you get to see just how strong Williams’ hands can be when he concentrates. Additionally, you can see how his length helps him tremendously by making a fantastic catch against Cincinnati. Furthermore, he shows off a tiny bit in his release by brushing past the press coverage. This allows him to get ahead of the corner to make this great catch. It’s a solid play all-around for Williams.

This last play that I’ll show you is just a glimpse at what Williams can be on every play with elite route running, release, YAC, and solid hands. Against Arkansas, he shakes off the corner and makes a splashy catch before driving ahead and breaking multiple tackles en route to the end zone. This shows how tough Williams is and that he can take a beating before going down. Though, maybe not every play, with his slender frame. However, this play should raise your belief in Williams as a dynasty option.

Williams is a great receiver. Provided his speed comes back, he’s going to be a good to great WR in the NFL for a long time. However, with a torn ACL, a landing spot becomes crucial in terms of dynasty. Plus, so does the makeup of your team. If your team is rebuilding, I’d focus on drafting Williams over some others because he will help your team when you’re ready to compete. On the other hand, if you’re win-now and in need of a WR, focus on landing another WR that is healthy and ready to go.

No matter what, though, Williams should be drafted in the first round of rookie drafts unless some unfortunate news comes out. I believe he gets drafted in the late first of the NFL draft and rookie drafts. Target him with your picks after 1.09, and he’s a great target to trade down/up for without losing too much value. I think with some coaching and fine-tuning, he could put on a Jaylen Waddle-type season, not right enough, but if he lands in the right system. Now, here’s hoping Williams ends up in a good landing spot and not somewhere bad. Draft Jameson Williams and watch his recovery as he goes from injured to star in no time at all.

As always, I hope you follow me @DarthDbacks. I love to talk football, baseball, movies, shows, Star Wars, Marvel, and of course to interact with the fantasy football community. Join Fantasy Football Chat and get tons of access to the best fantasy football chat group where a lot of Nerds hang out in. It’s free too!