1QB Mock Draft V 1.0 Round 2 is in the books. Where did the Dynasty Nerds team hit? Where did we miss? 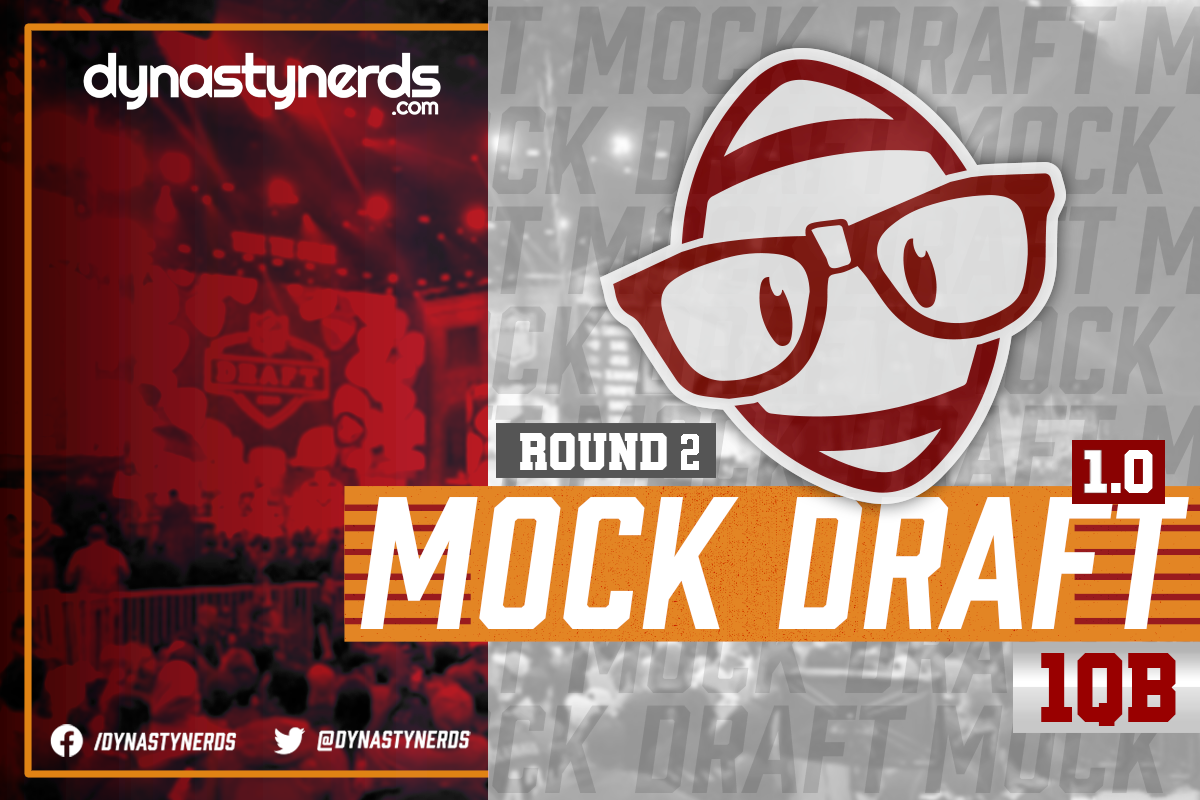 Round 2 of 1QB Mock Draft 1.0 is coming at you live. There were a couple of surprises in Round 1, but that is indicative of there not being a true fantasy superstar in the draft. Well, there might be, eventually, we’ll just have to see how it shakes out. You can check out Round 1 here.

In a draft that is short on potential superstars, I am grabbing Pickens at 2.01. A freshman year breakout who battled injuries, I like the big-bodied Pickens ball skills. Testing well on speed and athleticism will be important for Pickens. If Pickens lands somewhere he can adjust to the NFL as the WR3/4, we may be in for the more traditional 2/3 year breakout.

Rachaad White is a prospect I will be targeting in all of my rookie drafts. He spent his senior season juking through Pac-12 defenses and vaulting up draft boards. It didn’t take long for him to separate himself in a backfield with Daniyel Ngata and DeaMonte Trayanum. White is one of the best receiving backs in this class and has a very NFL-friendly profile. Taking him in the second round of a 1QB rookie draft is a no-brainer.

My TE1, McBride, has good athleticism and plays like a WR with soft hands and the ability to create separation. He’s a good blocker already and will be able to make a difference from Day 1.

Tyler was suspected of only having a great 2020 season due to Zach Wilson. However, that’s simply not true. A former linebacker who turned into a running back had a stellar career at BYU. There’s potential for Tyler to run in the 4.3s at his Pro Day. Yes, he’s that fast. The size of a linebacker combined with that speed makes me think of King Henry Jr. He’s ready for an NFL career after in 2021, rushed 276 times for 1,600 yards and 15 touchdowns. Having seven games of 100+ yards and eight games of 20 or more rushes shows his body can handle a heavy workload. I doubt he earns a starting workload right away, but give him a year, and he should be the starter. Of course, this depends on the landing spot, but he’s a tremendous value this late in the second. Scoop him up and smile since you just got a massive bruiser as part of your RB depth.

At this point in the draft, I always like to make sure I take a safe player to guarantee a hit with my second. To that end, I will select my TE1 of the 2022 class. Big and adequately athletic, Wydermyer is a prototype TE for today’s NFL. Big enough to be an adequate part of the running game as an in-line blocker yet smooth and athletic enough to run routes from the slot or in-line. He is virtually guaranteed of being an early-round selection and, given the right situation, can develop into a quality TE for your dynasty squads.

It feels like ages ago when Justyn Ross was the apple of everybody’s eye during his 1,000-yard true freshman campaign. Ross returned in 2021 after missing all of 2020 with a serious neck injury. He managed 46 receptions for 514 yards and three touchdowns in an anemic Clemson passing offense. At 6’4 205 pounds, Ross is a true wild card in this class and someone I’m willing to take a gamble on at this point in a rookie draft.

Robinson is a gamble even at the 2.07. He was a 4-star recruit out of high school who landed behind future NFL RBs Damien Harris and Najee Harris. Robinson played five years at Alabama and did not take the lead until his final year. He has good size and decent speed but has a lot going against him as an older entry to the NFL. There is no shortage of opportunities to carve out a role. Landing in Houston, Miami, or Atlanta could provide Robinson with a chance to be the next late-round RB breakout.

I considered one of the Georgia running backs, but neither excites me here nor do any available receivers. I don’t mind starting the quarterback run at this stage in the draft with Sam Howell, who has been my QB1 in this class for several months. The physical tools are all there, I really like the arm talent, and he has enough athleticism to make him interesting in that area. Look for him to separate himself at the Senior Bowl.

Corral is my QB1, and I’m at the point in the draft where most other positions are pretty dry. Corral has enticing upside and is mobile – he will extend plays and can make any throw needed. He’s going to be fun, and sure, there’s a low floor, but I will take a shot here.

I don’t see anyone else here I am in love with at the moment, so I will take my QB1 in the 2022 class – Kenny Pickett. I believe when the NFL pre-draft process is said and done, NFL teams will see Pickett as the top quarterback amongst this group. Why? I think he is the most NFL-ready prospect in the 2022 class. Who wants to draft a quarterback prospect like Malik Willis when you’ll be fired within two years without showing results? No, I’ll draft the cool and consistent Kenny Pickett here and play the odds for a top landing spot. He has an NFL-ready cannon for an arm, and he has more than enough mobility to boost his fantasy rushing totals.

This late in the draft, it’s time to swing for the fences. Why not go with the small school kids with the amazing skills? Despite his lean frame, Tolbert possesses a skill set that many NFL teams covet. Tall, lanky, and fast, he makes for an ideal field stretcher who can threaten defenses on the boundaries and up the seam. Due to his small school, some in the draft community are slow to come around on Tolbert. Perhaps after his showing at the Senior Bowl, all that will change.

The late second round in 1QB rookie drafts is the time to start taking shots for upside, and that’s what I’m doing with James Cook. He didn’t have high-end production during his career at Georgia, but he has legit NFL talent. Cook is a versatile weapon that can be lined up all over the field. An Excellent pass catcher and an efficient runner between the tackles. Cook got the all-important Senior Bowl invite as well. Keep a close eye on how he performs down in Mobile with a solid showing Cook’s stock may only rise.

Who was the steal in Round 2?

That does it for version 1.0. That was a nice little QB run at the end of Round 2. Is there another Justin Herbert in the group? Who do you think got the steal of the draft in Round 2? Does Robinson overcome staying in college for four years? Do Pickens and Ross overcome college injuries to become dynasty darlings? There are a lot of questions in this class. Up next will be a Superflex draft.