Mock draft season is in full swing. The Dynasty Nerds team is here with Round 1 of our 1QB mock draft version 1.0 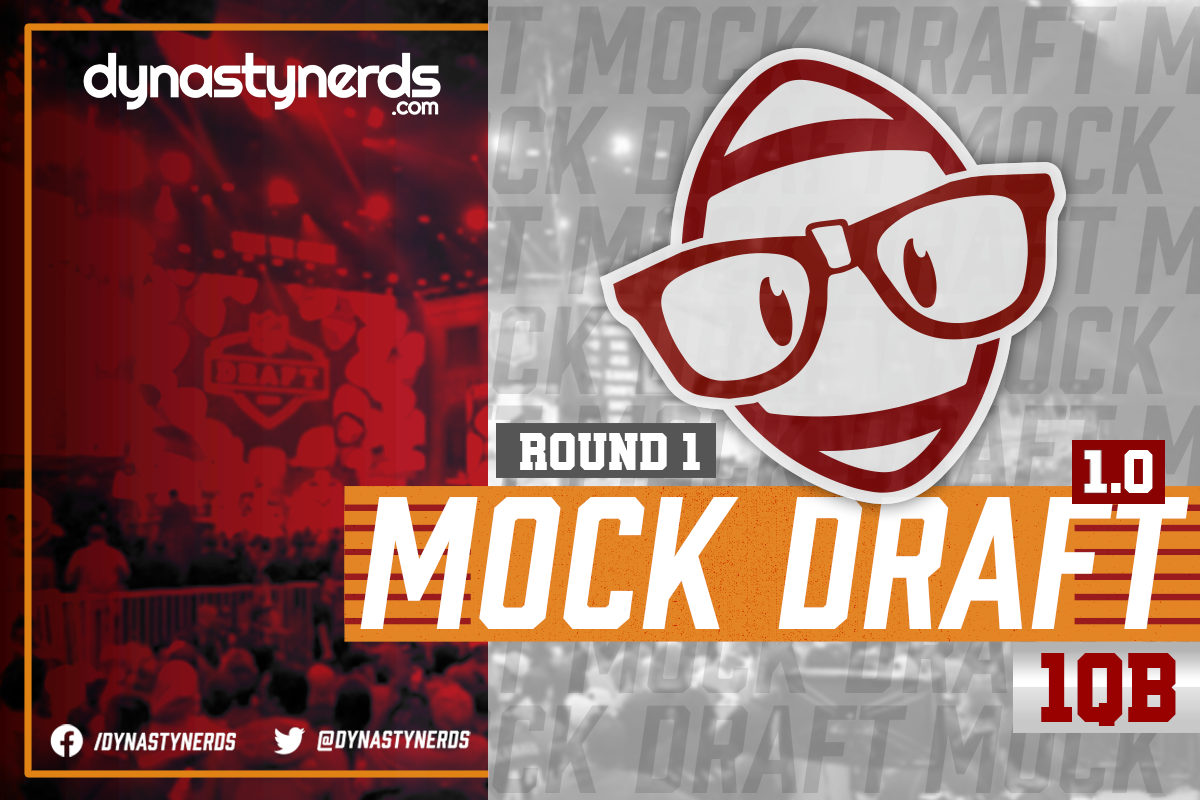 The fantasy playoffs are comfortably in the rearview mirror. It is MOCK DRAFT SEASON!!! Between now and the NFL Draft in April, the Dynasty Nerds team will be dropping a lot of mock drafts to help you prepare for your rookie drafts. There will be 1QB, Superflex, Tight End Premium, IDP. You name we are going to mock draft it. Let’s dive into Round 1.

Part AJ Brown, part DK Metcalf, part Deebo Samuel, all monster WR. Burks is athletic and has soft hands. He uses his size to create separation and his athletic ability to pull away from defenders. The jury is still out whether Burks’ limited route tree was a function of the Arkansas offense or his limitations. That will be something to monitor. Burks will excel at the big slot role while the rest of his game develops.

The RB1 debate in this class will rage on, at least until we know draft capital and landing spots, but Breece Hall is my guy based on the information we have now. I think the community went through a burnout phase with Hall because he has been around as an elite producer since he was 18 years old. The film doesn’t lie, though. Between him and Spiller, I prefer Hall’s vision, receiving ability, and contact balance. His pass protection ability is plenty good enough to keep him on the field. Hall is the most complete running back in this class and has a better shot at being an every-down player.

For me, Spiller is the top back in this class, a true three-down back from Day 1. He’s big, can run physical, loves to get north and south quickly. He moves well for his size and caught more than 20 passes in each of his three seasons. I love Spiller. Give me him over Breece 100 times over 100.

With my top two running backs off the board, I’ll take my top wide receiver in this class. Garrett Wilson has everything you want in a top dynasty project, and when the draft capital comes this April, look out. Wilson dominated the Big Ten this year to the tune of 70-1058-12 in 11 games. He has the perfect profile and skill set to be a chain-moving cog in today’s NFL offenses.

Prior to his fractured ankle Drake London was in the discussion for top WR in the 2022 class. The big-bodied kid out of USC has shown an elite skill set reminiscent of Mike Evans. London is also one of the youngest players in the draft nit turning 21 until late July. With the top 2 RBs off the board, I am going with the highest upside player left on the board.

Before Jameson Williams’s unfortunate ACL injury in the National Championship game, there was talk he could be the first receiver off the board in the NFL Draft this spring. Williams exploded on the scene transferring from Ohio State to Alabama this fall. He finished top three power five in receiving yards (1572) and top two in touchdowns (15). Williams has good size (6’2 190) and blazing speed (rumored 4.3 range). He’s a more complete receiver than he gets credit for. I expect he will still get first-round draft capital in the draft. If there’s a price dip on Williams due to his injury, I’m buying it in rookie drafts.

Walker is an explosive RB with the size to carry the load. He is a patient runner with the vision and speed to bounce outside. He is willing to take on tacklers to gain the extra yard. A capable check-down receiver, Walker, needs work to expand his route running capability. The biggest knock on Walker’s game is the lack of ability in pass protection; that will keep him off the field early in his career.

David Bell is another receiver in this class with good size and impressive acceleration, reaching 20.1 mph in just 4.4 seconds in a huge 11-240-1 performance against Iowa last season. He excels in tight coverage and is a contested-catch machine. He is a very physical receiver with an advanced skillset and exceptional body control. Bell is a technician at receiver and made the most of his opportunity as the featured playmaker in Purdue’s offense.

Size, schmize, Williams is a baller – his cutting ability is ridiculous, dangerous as heck in the open field, and the best blocking back in the class. He’s smooth as a pass catcher, and I could see him being Austin Ekeler 2.0 – another ‘too small’ back winning fantasy freaks championships. No question for me – Kyren is the man.

At pick ten, I will double down on Ohio State wide receivers. Chris Olave became the forgotten prospect between the consistent dominance of Garrett Wilson and the breakout of Jaxon Smith-Njigba. How fortunate for dynasty drafters that a 65-936-13 season has gone overlooked. Olave suffers from prospect fatigue syndrome. He would have been a highly drafted player last year despite the depth and talent of the 2021 rookie class. Do not penalize him for going back to school. Olave may not be the elite prospect that his teammates are, but he will be a great NFL player. Draft him with confidence.

Dotson is one of the top WRs in the 2022 class. He has the perfect build and skills set for today’s NFL. With the ability to play inside or on the perimeter, he will fit any NFL system. He is shifty, fast, and tough with loose hips that allow him to routinely create separation, which is the name of the game in today’s NFL. He reminds me of Emmanuel Sanders and is an excellent prospect who should flourish for his NFL and your dynasty squads.

Transferring from Nebraska to Kentucky truly unlocked the talent that is Wan’Dale Robinson. Being utilized properly, Robinson exploded for 104 receptions for 1334 yards and seven touchdowns. He possesses dangerous change of direction and game-breaking speed. Size may be a concern. Talent is not. Robinson should land solid day two draft capital. He’s somebody dynasty managers will be looking forward to drafting this spring.

Get ready for Round 2

Round 1 is in the books. Be on the lookout for Round 2. Did any of the picks surprise you? Who did we leave out of Round 1? Comment and let us know what you think.