The record setting QB Bailey Zappe is getting reviewed today for the NFL draft and your Dynasty draft! Find out what @DarthDbacks thinks and if you need to make sure you draft him. 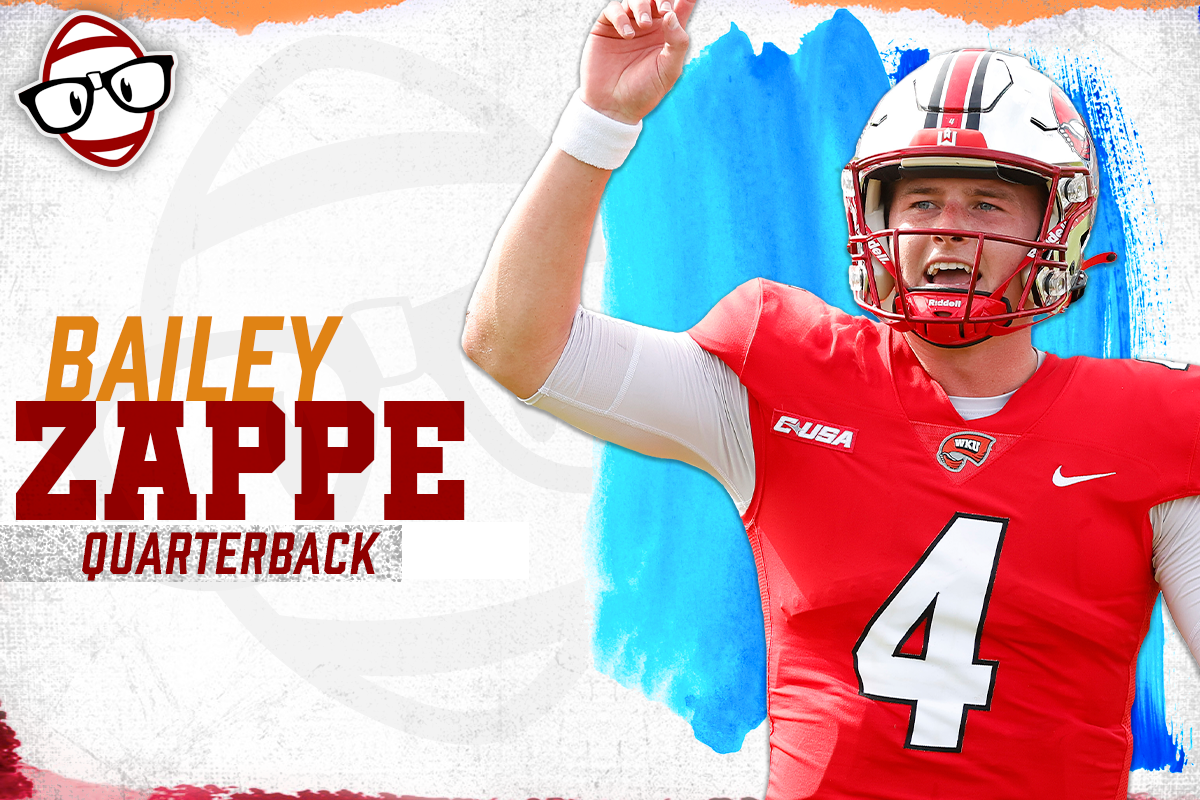 We are deep in the rookie profiles, and this is the latest in the Dynasty Nerds series. I’m covering the quarterback Bailey Zappe out of Western Kentucky. He’s a good QB that set records this last year, records that Joe Burrow held. I expect him to get drafted in the NFL, most likely in the 2nd-3rd round. The senior QB has good size and arm talent.

As I mentioned above, Zappe had quite a historic 2021 season. However, a little backstory will be shared before we get to that. Zappe previously went to FCS school, Houston Baptist, for three years. Upon his offensive coordinator Zach Kittley leaving for Western Kentucky to become their head coach, Zappe followed. He immediately became the starting QB for WKU and broke Joe Burrow’s NCAA records. Zappe threw for 5,967 yards, 62 TDs, 11 ints, 475/686 passing, and was named the ’21 C-USA MVP and All-League 1st team.

First, he took WKU to the C-USA Championship game. Then, Zappe took the Hilltoppers to the Boca Raton Bowl, where he was named the Bowl MVP after throwing for six TDs and 422 yards. It was a premier platform year for the small-school QB.

Zappe is a stocky passer that is super confident and knows how to lead. You wouldn’t have to worry about his leadership for sure. In college, he played in the Air-Raid system, which would be the ideal system for him to go to in the NFL. Furthermore, Zappe has good pre-snap play recognition, understands blocking schemes, and knows how to work in a collapsing pocket. He isn’t scared of having to step up into the pocket. Finally, he can dissect man or zone defensive schemes.

Although Zappe is tall enough to be QB, some teams will feel that he isn’t a great size at QB. While he can run, he isn’t exactly Kyler Murray out there. He reminds me more of Teddy Bridgewater or a very young Big Ben running. Zappe is not fast but will gain yardage, especially in short-down distances. Another factor is that he lacks the top-end arm talent. He has enough arm to get the ball downfield but isn’t going to zip that ball 50 yards downfield like Herbert.

Plus, some scouts seem to not like Zappe’s arm delivery. He does throw a bit weird, where he will have to throw it the same way every time. I don’t foresee him throwing sidewinders any time soon. Additionally, Zappe will sometimes focus on the first read too much, and force passes that wind up as interceptions. This isn’t common, but it’s something to point out.

Although Zappe doesn’t have great arm strength, he still has plenty. Just watch this throw. It’s a beautiful throw deep to the WR on the run. It’s perfectly placed so that the WR doesn’t have to slow down. Zappe pump fakes with his head to get the DB to bite, which opens up the WR to make it even better. You can tell that I think this is a great throw/play. Footage from the Nerds Prospect Film Room!

Looking at the play above, you can see how confident Zappe is with his throwing ability. He throws that ball with a zip into a tight window where only his WR can catch it. It’s perfectly placed and nearly leads to a touchdown. This play shows that Zappe can put some heat on the ball if he needs to. At least for short distances.

In this play, you will see Zappe go through his reads before deciding on throwing the ball. I can see his helmet move around the field until he finds the wide-open receiver. It’s an excellent play; watch to see that Zappe can be patient and make his reads. Additionally, he did this against zone coverage which showcases his ability to dissect that version of defense.

While you watch this play, look at Zappe’s feet. They stay moving and mobile rather than planted. It’s important to me to see a QB constantly moving his feet around in the pocket rather than just standing there. Furthermore, I love how Zappe steps to the side and then up into the pocket to avoid rushers before going up and throwing on the run. I was worried about his mobile throws, but this helps prove that he’s easily capable of making them. Zappe can make these throws.

Zappe places a perfect throw down the middle of the field into triple coverage. It’s a risky throw that showcases his confidence. However, he zips it perfectly into the opening to gain valuable yardage. This speaks to the belief he has in his arm.

I know that I said that Zappe struggles to run, but he’s better than I remembered. I still don’t think that we want him to do many designed runs, but he does have some mobility to him, which helps a lot. This will allow him to be able to obtain yardage on broken plays.

In this play, Zappe demonstrates his ability to escape a collapsing pocket. He can easily escape it and rush for a few yards. It’s important to note his ability to see the rushers and avoid them or break free of their arm tackles. It shows his toughness. Zappe isn’t an easy player to take down. Nor is he one that is afraid of rushers.

Now, for the bad parts to his game. Zappe will sometimes not make the right decision when rushed with the football. In this play, he sees the rusher coming at him, and after the pump fake didn’t work, he throws the ball. This results in an INT. It’s an awful play since the receiver was open, and so was the dirt. The best veteran call would’ve been to chuck the ball down at the dude’s feet. However, he should’ve taken the sack at worst.

Zappe has a ton of untapped potential in his arm for the NFL. That’s why I gave him the comps of Teddy Bridgewater/Case Keenum. They are a QB2 and can be a reliable weekly starter that will get 15+ points at their best. This is what I see Zappe becoming. Ultimately, I think he becomes that career-long backup that rakes in tons of cash while barely playing.

It depends on the system he goes in and the QB competition he faces, but I wouldn’t be surprised to see Zappe eventually get a shot at starting in the NFL. As for rookie drafts? I would take him in the late third round since he is a QB. Plop him into your taxi and wait. It’s a free spot, and QBs are valuable in Superflex leagues. It’s worth the risk, and the chances Zappe outperforms his pick relative to an RB or WR there are very high.

Make sure to subscribe to the #NerdHerd, where you get exclusive content, dynasty/rookie rankings, and DynastyGM! Additionally, if you want 15% off of ANY SUBSCRIPTION, USE PROMO CODE ‘MAYTHEFORCEBEWITHYOU‘ or CLICK HERE.

Give me a follow on Twitter @DarthDbacks. I love to talk football, baseball, movies, shows, Star Wars, Marvel, and of course, to interact with the fantasy football community. For more articles of mine, click here.

2022 Rookie Profile: Tyler Allgeier – Running Back
Rookie Tiers – Why I Use Them And You Should Too 
Black Friday Sale