The post-combine Superflex continues with Rounds 3 & 4. Check out what the Dynasty Nerds team has in store. 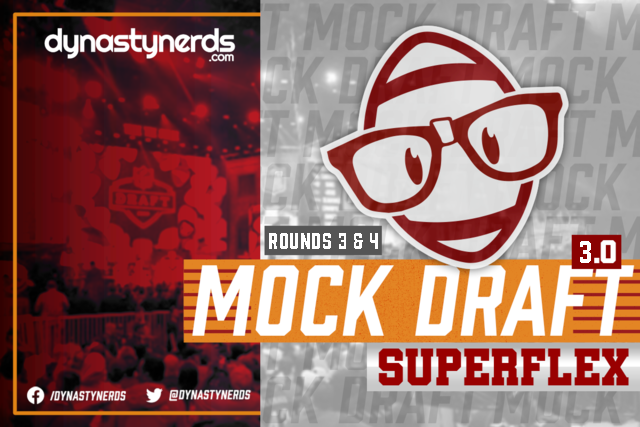 We have worked through four rounds of the Post Combine Superflex Rookie Mock Draft. With huge trades and free agent signings happening just about everyday in the NFL, draft capital will wreak havoc on mock drafts for the next couple of months. It is sure to be an exciting offseason.

You can find Round 1 of the draft here and Round 2 here.

Brian Robinson will be getting better NFL draft capital than any of us are thinking right now. NFL GMs and coaches trust Saban’s players and Robinson will have a role year one. He may only be deployed in short yardage situations or goal line work, but he will be active on gameday. Which means he will have immense handcuff value. Not a bad fantasy asset to grab at the beginning of the third round of your rookie drafts.

The epitome of a powerback, Allgeier wins the first contact consistently. His frame and balance allow him an edge while he fights for every blade of grass. If he finds himself in a zone scheme offense where he can hit a hole with power without having to watch for a gap to open up, watch out. Welcome the next Jordan Howard (and I mean this as a very good thing).

Strong’s draft stock has taken a long and winding road this offseason. His phenomenal arm strength shone brightly during the Combine’s on-field drills, giving me reassurance that he could excel in the right environment. Let him land in a favorable landing spot, and this selection will pay immediate dividends in a Superflex format.

Here I am strictly looking at a shot for upside. Wydermyer is no guarantee to find NFL success but his metrics are solid from the jump. He also had his breakout season as a 19 year old freshman at TAMU and put up consistent numbers all 3 years. Low risk, medium reward on this pick at a position that is often a crapshoot. Not a bad spot to take a shot.

Once a highly touted-recruit, Ford transferred to Cincinnati after getting buried on the depth chart at Alabama. As a Bearcat he averaged 6.3 YPC with nearly 300 carries. One of his best traits is long speed and that showed at the NFL Combine. At 210 lbs, he was still a top-tier performer in speed testing with a 7.76 Relative Speed Score. At worst, he’s a rotational back at the next level but the upside is there for much more.

Yes, I know I said I prefer taking alpha receivers when I took Bell in Round 2, but I couldn’t pass up on the excitement of having Robinson on my team. Just 5’8″, I am taking him here based off of his portfolio at the college level. In 2021 Robinson had 1334 yards and 7 TDs on 104 catches. I am thrilled to get in the mid third.

This one is a risky selection but could provide huge dividends. If Ross is 100% healthy like he says, he is a 6’4” playmaker that has the ability to be an alpha on the outside. His draft capital could tell us what the NFL thinks about his health.

Keontay Ingram is one of my favorite sleeper candidates in this class. He is a post-combine riser. Ingram is big enough to handle a bell-cow role, posted a great time in the 40-yard dash for his size, and has shown above-average ability as a pass-catcher.

Upside, upside, upside. this late in the draft it’s all about swinging for the fences. Few players helped themselves as much at the 2022 combine as Alec Pierce. He is long, tall, and explosive having run a 4.41 40 with a 40.5 vert. Combine that with his college production as Ridders go-to WR and you have a sneaky prospect I’m happy to gamble on.

This late in the draft, I’m only looking for players who would have a defined role, and therefore a clear path to playing time and touches. Haskins is a power back, leading the RB group at the combine with 27 reps in the bench press at 225 lbs. He finds the endzone, with an amazing 16 touchdowns on 33 carries inside the 5 yard line last year for the Wolverines.

Greg Dulcich is a fast-rising tight end prospect that impressed at the Combine. For a TE, he ran a 4.69 40 and a 7.05 3 cone drill which are impressive. Plus, he looked great doing blocking drills at the combine as well. In this late of the draft, I want upside.

Many film analysts have Pierce as a top 5 back, and for good reason: he combines a hard driving, tough to tackle running style with excellent vision, hands, and burst. His lack of top end speed is a limitation, but his assets are plenty good to land him a committee or backup role in the NFL

Isaiah Likely measured in at the combine on a smaller side for a tight end and that’s okay. For fantasy purposes, the less blocking a tight end does the better for your team. Likely is an amazing route runner and will profile as a move tight-end/big slot at the next level. Think a Mike Gesicki level usage. Can’t get much better in the fourth round.

CA3 is a guy I was originally staying away from, but I’m willing to take a risk on in the 4th round. Insane agility, incredible speed, but laughably undersized, I’m more so expecting him to have a role as a PR/KR before I actually see him line up out wide. Nevertheless, he’s one of the better bets this far into the draft..

Jalen Tolbert raised his profile with a strong effort in Indianapolis. The sure handed wideout first garnered attention with mitts that measured in at 10″, an eighth of an inch larger than draft darling Treylon Burks. He would then go on to post a reputable 4.49 second time in the 40 yard dash.

Though his metrics and athleticism aren’t anything to right home about, Zappe took his only FBS season after moving up from FCS and re-wrote the record books. He broke both the single season passing touchdowns and single season passing yards records. Investing a 4th round pick into the most valuable position in SF for a shot is the best chance at a lottery ticket this late. Easy pick in my opinion.

Badie has an early-Day 3 grade for me as my RB11 in the class. He certainly has a place in today’s NFL as a top-tier receiving back and zone-based runner. I project him to be a PPR asset for dynasty managers, similar to what we have seen from Nyheim Hines over the past several seasons.

My final selection is the underrated Khalil Shakir from Boise St. I love Shakir’s ability to locate and adjust when the ball is in mid-air and his highlight reel catches show an ability to win the contested pass. Shakir had a great combine, coming in with a 4.43 40-yard dash. At 6 feet tall, that kind of speed is very appealing.

Strong gained over 1,800 total yards last season with 22 touchdowns for the Jackrabbits. He was targeted in the passing game 34 times and broke off 30 runs of 15+ yards. Strong was one of the most athletic backs at the Combine, running a 4.37s 40-time (fastest by RB). Production? Check. Talent? Check. Draft Capital? Time will tell.

Woods was a late bloomer in college. He is a massive human being, and freakishly athletic. He dominated the combine, posting the most bench press reps of any TE and the second-fastest time in the 40-yard dash despite being the biggest TE in the group. The upside is immense for Woods.

This late in the draft I’m just looking for a player I think can make an NFL roster and hopefully provide a chance at Dynasty relevance. Max Borghi has the makings of a 3rd down back who could provide some PPR relevance.

An older prospect who turns 25 in May, Velus Jones never really had great college production until this past season. However, he was a player who directly benefited from Senior Bowl week where he showcased his 4.31-40 speed and athleticism. WIth only three picks left in this draft, I’ll throw a dart his way.

At this point in the draft, it’s a guessing game. Fryfogle was a 2nd-team all-conference pick in 2021 and seemed to display a solid deep ball skillset capable of taking it to the endzone on any play. That’s good enough for me!

Kevin Harris followed up an uber-productive sophomore season with a bit of a dud this past fall, though that may have been injury-related more than anything else. Film guys like him, and he ranks highly in some useful metrics like Rushing Yards Over Team. He’s as good a flyer as any at this point in the draft.

Thanks for checking out Rounds 3 and 4. We hope this was helpful as you prepare for your rookie drafts. There will be more mocks coming from the team. You can find the 1QB mock Round 1 here and Round 2 here. Rounds 3 and 4 will be out in a couple of days.