WR Wan’Dale Robinson put on an absolutely amazing season at Kentucky, as he enters the NFL Draft, what does he do best? His dynasty value? @darthdbacks has the answers to all your scouting Q’s. 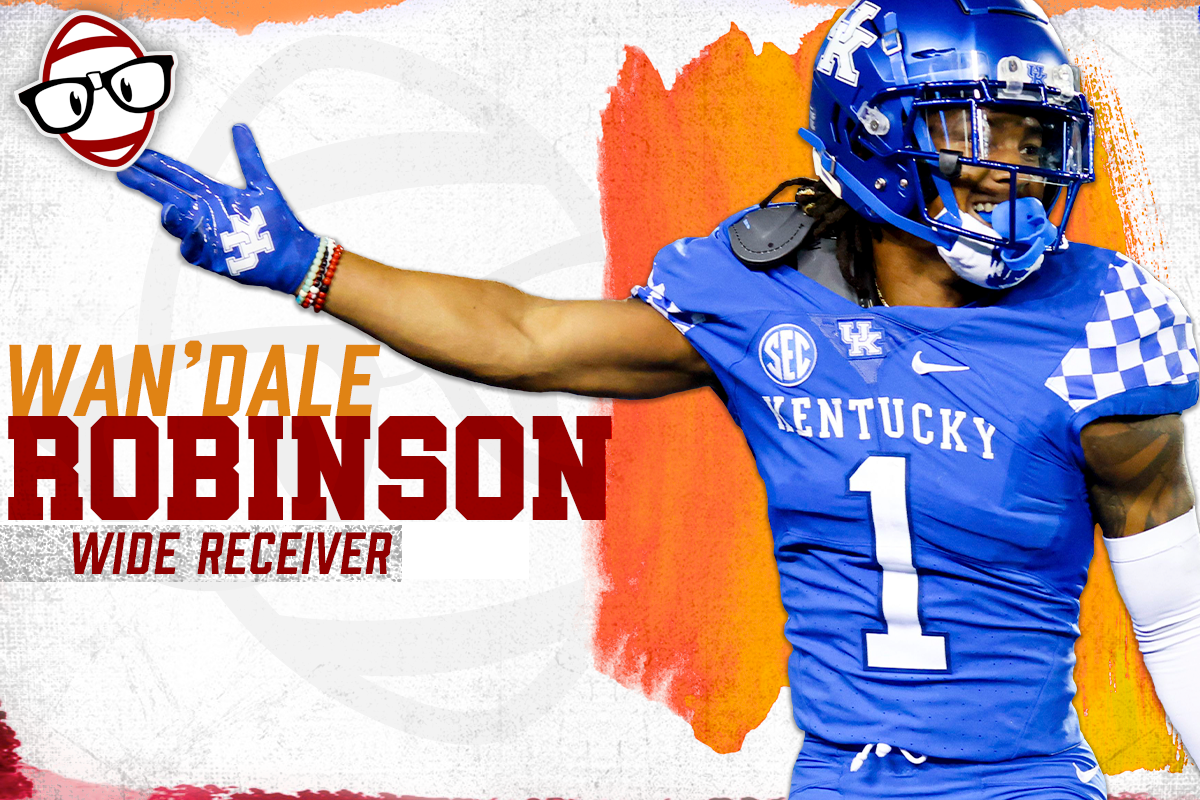 Wan’Dale Robinson rose from the depths of the unknown to a potential Day 1 draft pick in less than a year. The WR is a likely early Day 2 draft pick, but it wouldn’t be a huge surprise if he goes late Round 1. The transfer from Nebraska shined brightest at Kentucky, where he set fields ablaze. Don’t be shocked when he goes in the early second round of your rookie draft, if not earlier. He’s around WR6-7 in my rankings right now over at DynastyGM.

Height: 5’10” (potentially, rumored to be shorter)

Growing up in Frankfort, Kentucky, Robinson became the number one football player in Kentucky. He played WideBack in high school, where he became a 4-star recruit. In Robinson’s first three unheralded seasons, he played for the Nebraska Cornhuskers. Although, as a true freshman, he was named to the second-team freshman All-American, an honorable mention All-Big Ten selection, and was a two-time Big Ten Freshman of the Week. However, he wouldn’t do much for the struggling Huskers. Over 18 games at Nebraska, he put up 91 receptions for 914 yards and 3 TDs. Nebraska did feature him as an RB in which he rushed 134 times for 580 yards and 4 TDs. That’s not bad at all and speaks to his versatility.

In 2021, he decided to get closer to home and transfer to Kentucky, where he was put into a versatile NFL scheme. This truly allowed him to impress scouts and showcase his enviable talent. To say he had a career year at Kentucky would be underselling him. All Dale did at Kentucky was be Second-Team All-American (PFF), First-Team All-SEC (Phil Steele, PFF), Second-Team All-SEC (AP, Coaches), USA Today All-Bowl Team, Vrbo Citrus Bowl MVP, and a lot more. In his 13 games this year, he put up 104 receptions, 1,334 yards, 7 TDs, and an average of 12.8 ypr. Plus, over 7 attempts, he put up 111 yards rushing. Plus, he had a phenomenal 72% catch rate and 39.3% target share.

Indeed, Wan’Dale is a special talent at the WR position.

Analysis of the Tape

Below, I will be looking at multiple games, specifically 3, vs. Missouri, Tennessee, and their bowl game against Iowa. I’ll diagnose what I’m seeing and how I view his play.

This play showcases multiple plus attributes along with one unfortunate flaw that won’t be fixed unless he has a growth spurt. This play shows Robinson on a jet sweep that he nearly takes to the house. The play showcases his RB-ability, where he plants his foot and explodes forward. He can reach top-speed quickly, which allows him to break off large gains. You can just see how he explodes through that hole.

Additionally, he makes a nice cut to separate from the defenders and gain further yardage. Furthermore, you can envision him being a smaller version of Deebo Samuel in which you can get the ball in his hands in various ways. He’s an explosive playmaker.

However, the fatal flaw is his height. Due to his legs being shorter than other players, he will get chased down. You will see his strides are just not near the same length as the guys chasing him. However, while that might limit his TD potential, he still got nearly 60 yards on that play.

You see Wan’Dale launch off the LOS in a deep crossing slant in the play above. He gains a large amount of separation as he blows past the zone coverage. Then, as the ball is thrown, you can see him slow down and track it. This displays his innate ability to track the ball like a centerfielder in baseball. He ensures that he is in the proper position to catch it. Of course, if he were a bit bigger, he would’ve been able to catch that without falling. Despite that, it still shows that he can catch some deep balls without dropping when contacting the ground.

Upon viewing this clip, it should come as no surprise that Robinson won MVP of this bowl game while catching 10 catches for 170 yards. He plays bigger than his size. This clip shows his ability to make a tough laying-out catch. It’s a deep route where he has to get past his defender and avoid the 3rd-level safety. He blows past the corner then tracks the ball perfectly to layout and make a fantastic catch. His hands were like superglue where he just makes it look so easy. A great route and catch.

Here, Robinson shows off his contested-catch skills along with his toughness. He runs a deep slant and gets pummeled as soon as he catches the ball. Fear not, though, as although he’s slow to get up, he barely misses any plays. This was impressive to see him be able to hold onto the ball in mid-air while getting rocked. It speaks to his hands’ ability. He will have to be careful not to take too many of these hits in the NFL.

Yet another fantastic example of Wan’Dale Robinson’s catch skills, ball tracking, and ability to hold up against contact. In this play, you see that the ball is behind Robinson. Thus, he turns around and makes a leaping gut catch to protect the ball. Doing this, he shields himself from the defender. While getting driven to the ground, he holds onto the ball. This makes me excited. Why? Well, it means that he can manipulate his body and adjust to various types of throws. Additionally, it is just another strong tool in his toolbox of skills.

On the downside, this catch worries me due to his height/catch radius issues. The fact he has to jump so high to make this catch is a bit worrisome. His shorter arms will lessen his ability to make off-throw catches in the NFL.

This terrific clip amazes me at Robinson’s TD catch. He leaps over the defender catching the ball over the dude’s helmet! He can leap for a shorter NFL guy. This will allow him to remain a red-zone threat in the NFL. Thankfully, it helps me see that he knows how to manipulate his body to be in the best position to make a difficult catch. He turns and faces the corner. This lets him see the ball into his arms. Yet another example of his strong arms/hands. I’m so excited to see Wan’Dale be in an NFL system that can use him to his best abilities. A great play, catch, and exciting future for Mr. Robinson.

Wan’Dale Robinson: Elusiveness and agility along with playmaking ability

Perhaps one of the best plays of his career came late in the 4th Quarter for the Wildcats. It was an amazing 52-yard catch and run before being tackled at the one-yard line. This is a great example of his explosive playmaking skills. In addition to that, you can see how hard he is to catch in the open space with his agility. He makes two guys miss and manages to stay on his feet/in bounds. His route was perfect as he got out in space at exactly the right time. This is what Wan’Dale can do on any play.

Ideal Role/Team in the NFL

Honestly, Wan’Dale Robinson needs a robot to tell him when he is in danger. Why? Well, he plays with an aggressive attacking style with no fear. In the clips above, you can see him fight for extra yardage and take hard hits. Yet, he keeps going. Wan’Dale Robinson is a natural WR with an extra dose of RB ability. He’s got elite agility, strong hands, great leaping skills, and explosive playmaking ability. However, he does need to refine his route running, head fakes and learn some different routes. Beyond that, he must adjust to the physical play of the NFL and learn how to use his shorter legs/arms to his advantage.

He reminds me of a bigger/stronger Rondale Moore with a dash of Diontae Johnson and Deebo Samuel in there. Now, will he reach those heights? I don’t know. I do know the type of system he would be perfect in. Robinson is a slot-type WR. He’s perfect for an RPO, play-action-heavy offense. If he lands in a Shannahan, Pederson, or McVay-style offense, he’s fantasy gold. Anywhere else, and I’m a bit more worried.

He’s an excellent player that needs to be used in versatile ways. He isn’t an outside-only player. If a team tries to make him into one, don’t take Robinson in your drafts. My dream fits for Robinson would be going to the Dolphins, 49ers, Colts, or Raiders. If he’s taken to one of the best fits, I can easily see him becoming a late-WR2. However, if he goes to a team with an iffy usage, then he’ll probably be a WR3 at best. In dynasty, I’m taking him in the early Round 2 rookie drafts no matter what.

On the other hand, if he lands in the best spot like the Dolphins, I’m going for him in the late-1st. Talent and draft capital weigh the heaviest. Wan’Dale being taken in the first or second route would be a dream scenario for his fantasy stock.

No matter what, though, get some Wan’Dale Robinson in your life. Also, be sure to start stock-piling late 1sts/2nd round draft picks. This draft is filled with potential gold in that area! Check out our mock drafts to see the types of players you can get! 1QB, SF Round 1, SF Round 2!

Make sure to subscribe to the #NerdHerd, where you get exclusive content, dynasty/rookie rankings, and DynastyGM! Check out my rankings! Additionally, if you want 15% off of ANY SUBSCRIPTION, USE PROMO CODE ‘MAYTHEFORCEBEWITHYOU’ or CLICK HERE.

Give me a follow on Twitter @DarthDbacks. I love to talk football, baseball, movies, shows, Star Wars, Marvel, and of course to interact with the fantasy football community. Join Fantasy Football Chat on Discord and get tons of access to the best fantasy football chat group where many Nerds hang out. It’s free too!