Superflex Mock Draft V 1.0 Round 2 is in the books. Where did the Dynasty Nerds team hit? Where did we miss? 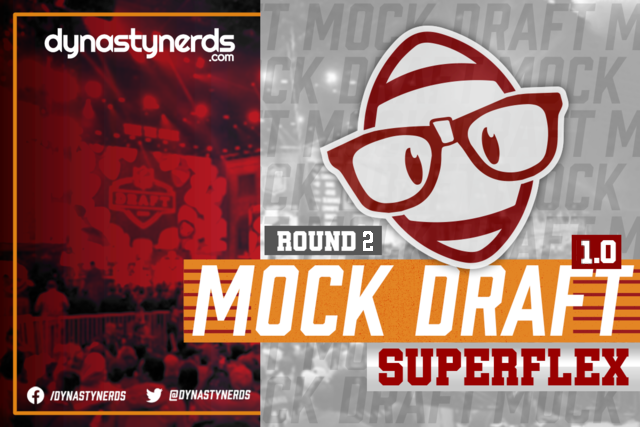 Wow, that was some weekend of playoff football. Every game with a thrilling ending, the most exciting of which was the Chiefs and Bills, who scored 25 points in the last 1:54 to go into overtime. Watching Gabriel Davis, who was a 4th or 5th round rookie pick in most drafts, go off for over 200 yards and 4 touchdowns was a real treat. Looking at some drafts from the last couple of seasons, I see second-round picks like Brandon Aiyuk, Amon Ra St. Brown, Jalen Hurts, and AJ Dillon having fantasy success. Let’s take a look at Round 2 of Superflex Mock Draft 2.0. You can find Round 1 here.

The choice here was between Strong and Willis. I don’t think there are two more opposite players at a position. I chose Strong. He started 31 career games at Nevada with a career completion rate of 68.1% with a 74/19 TD/Int ratio. Strong isn’t going to provide anything in the run game, but he moves well in the pocket. He comes with a strong arm and the ability to make NFL throws. A likely Day 2 pick, he should land somewhere he can sit for a year before seeing the field.

Willis here is a coup. He’s an electric runner with a cannon for an arm, and he’s no worse as a passer than the college versions of Josh Allen or Trey Lance. When the dust settles on this class, no one will be surprised if Willis is the best fantasy asset, QB or otherwise.

Williams is my RB3 in my class, behind only Spiller and Hall, and I have a hunch that he will go off draft boards earlier than many at the moment believe. The combine will be crucial for Williams to set decent NFL size and speed benchmarks. If he does, I’ll stake a claim that he is a certain day two pick in the NFL draft. Dynasty players will love his burst, hands, and agility, but NFL coaches are also going to see his top-notch pass-blocking ability. What does that mean for us? Williams will see the field earlier, which means he will produce for your dynasty team sooner.

Dotson is a great well-rounded prospect who could come in and immediately contribute to a passing game as a second or third weapon. He’s an electric athlete that could make big plays, especially in space, with speed and elusiveness.

After skipping out on QB in the first round to nab my number one RB, I couldn’t be happier to select Ridder here in the second. Big, physical, and with as much upside as anyone in the class, Ridder could be the first QB taken in the upcoming NFL draft. Some analysts have him ranked as the number one QB prospect of 2022. I believe he would benefit greatly from a season to learn with the jump to the NFL, but to get a likely first-round NFL QB here in the second, I couldn’t ask for more.

This felt like another great value pick for me, with few elite producers left on the board. Wan’Dale Robinson is a dynamic gadget receiver and very instinctive with the ball. He is an instant mismatch for defenses with his shiftiness and ability to separate with ease at the deeper levels. Kentucky lists him as 5’11” but don’t be surprised when he measures in at 5’9″ or so at the NFL Combine. Robinson’s last verified height was at the All-American Bowl in 2018, where he was 5’8 1/4″.

Spending a few years in JUCO before blowing up in the desert, White is a bit older, but his upside is ridiculous. He can catch passes and is incredible as a runner. White has good vision and contact balance, plus the ability to hit another gear in the open field to break off big runs. He’s one of my favorite prospects in the class.

This is a textbook high-risk/high-reward pick. I can’t unsee what he did as a freshman, earning playing time in a loaded WR room as a true freshman and capping off a breakout season with 6 catches for 153 yards and a TD against Alabama on the biggest stage in college football. I couldn’t wait to draft him in dynasty one day. And now I can in the late 2nd round? Sign me up. Big, explosive, polished, everything you’d want in a prospect. He missed his entire 2nd season, and in his 3rd he never looked like his old self. I don’t think he was fully healthy, and I’m happy to take a chance on a guy with this much upside in the back half of the second round.

Trey McBride is easily my TE1 of this draft. I don’t know how I got him this late in this mock draft. Seriously. He’s a stud. After this senior bowl, his hype is going to GROW. Due to him being from a relatively unknown school among common fans, he hasn’t received near enough attention. His hands are silky smooth as they catch every single ball thrown his way. He’s great at contested catches and isn’t afraid to jump ball it. He reminds me of Zach Ertz, a great blocker, knows how to run routes, break down coverages, and is very football smart. He’s a pure difference-maker, leading Colo St in receptions (86) and yards (1,017). Be sure to grab Trey as he can be the next Pat F. He’s good, and I’m planting my flag on this player!

Getting one of the most talented wide receivers in the 2022 class at 2.10 in this exercise feels like tremendous value. Pickens impressively returned to action at the end of the season, coming off an ACL tear. He’s a true “X” with great ball skills who excels vertically at 6’3 200. 2.10 is a bargain considering the upside Pickens presents in this class.

John Metchie III possesses the elite breakaway speed that we covet in WR prospects. I consider this pick an extreme discount for his services due to the ACL injury. His speed will help him be a feared downfield threat, but he also has admirable route-running ability. This will allow Metchie to line up all over the field. Although he is a bit undersized, he plays a lot bigger than his limitations. Metchie will be a terrific NFL WR in this loaded class.

We have hit the point in the draft where the landing spot plays a larger role in my selection. I decided to take one part of the two-headed rushing monster from Georgia. Cook has been able to do more with the ball than Zamir White has to be frank. He is much more active in the receiving game than White was this past year which is attractive for PPR formats. I’m not overly impressed with his athleticism, but he does have the potential to rattle off a big play on a dump-off pass. If he had the chance to go to Atlanta, I think that would help his case. Oh, and if he ever gets into trouble in the NFL, he can just call up his pro-bowl brother in Dalvin Cook. Not a bad person to have help you out.

Who was the steal in Round 2?

That does it for Superflex version 1.0. Is there a Michael Carter, Michael Pittman, or Elijah Mitchell in the second round of the 2022 draft? Time will tell. Drop a comment and let us know who you think the steal of this mock is.