The Dynasty Nerds team is here with Round 1 of our Superflex mock draft version 1.0 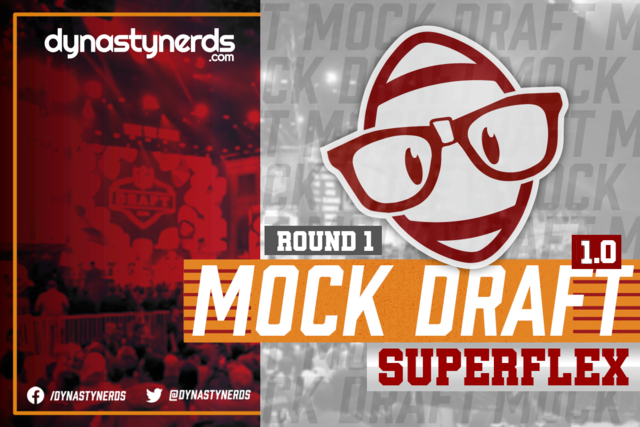 We dropped rounds one and two of the 1QB mock drafts here. Now it is on to the Superflex mock draft. There is no consensus for the quarterbacks this year. Let’s see how they shake out in this draft.

Sam Howell broke out as a freshman with over 3600 yards and 38 touchdowns. He lost his top four weapons to the NFL and had a down year in 2021, “only” throwing for 3056 yards and 24 touchdowns with more than 800 yards rushing. He has the arm to make all of the throws in the NFL and 38 games of starting experience. Don’t get cute in Superflex leagues. Take Sam Howell.

It’s not likely that I’m taking Spiller here a few months from now. But at this point, not knowing where the QBs will land or who’s getting draft Round 1 capital, I’m more comfortable taking my RB1 or WR1 than a QB, and I’m opting for Spiller over Burks. Spiller has done nothing other than shred defenses for the past three years, despite playing on often sub-par A&M offenses. He’s got burst, soft hands, and movement skills that remind me of Alvin Kamara, capable of turning nothing into something. Spiller is the next in line in the turnover at the top of the fantasy RB landscape.

Look, I’ll be honest. I do not pretend to know how NFL teams will view any of the quarterbacks in this class. None of us do, and anyone in the dynasty community who tells you otherwise right now in January is lying to you. We have a long, long way to go until the end of April. By “mock” drafting Pickett here, I am playing a hunch. I believe when all is said and done, NFL teams will see Pickett as the top quarterback amongst this group. Why? I believe he is the most NFL-ready prospect in the 2022 class. Who wants to draft a quarterback prospect like Malik Willis when you’ll be fired within two years without showing results? No, I’ll draft the cool and consistent Kenny Pickett here and play the odds for a top landing spot. He has an NFL-ready cannon for an arm, and he has more than enough mobility to boost his fantasy rushing totals.

I was shocked both my QB1 and my RB1 were available at this point, making this decision difficult. If a team was already set at QB, Breece Hall makes a lot of sense, as I think he can contribute on a fantasy roster from day 1. But I once made the “mistake” of taking Swift over Herbert in a Superflex league, an anecdote I’m using to highlight the positional premium that exists with this league format. Nail your pick at QB, and you can get any RB you want. Corral blossomed under Lane Kiffin, and he brings strong tools as both a passer and rusher and is a solid candidate to be the top offensive skill player drafted in April.

Generally, in a Superflex league, I always go QB in the top half of the 1st. However, with the top 3 QBs off the board, I chose to pivot and take my RB1. I was tempted to take one of the talented WRs in the class, but with that position being far deeper than the RB crop, I chose to go with Hall. Big and athletic with a proven record as a bell cow, there is a lot to like about the Iowa St. kid. He reminds me a lot of his former teammate David Montgomery just a little less shifty but with more speed to make up for it. Simply the safest RB in the class.

Treylon Burks falling to me at this spot was the best-case scenario. In a class full of wide receivers with elite athleticism, Burks stands alone as the outlier. He has the frame of a traditional prototype at the position with enough speed to be an instant mismatch for defenses. I expect Burks to be a sub-4.4 40 runner at the NFL Combine, which would send shockwaves throughout the draft community. His body control and jump ball ability are a sight to behold. With great size, blazing speed, and excellent ball skills, Burks has distanced himself in the WR1 conversation.

Wilson is the safest WR in the draft, in my opinion. He’s a smart player, runs great routes, has good hands, and easily creates separation. He’s been my WR1 in the class for a while, and I believe Burks has more upside but more risk. I will grab Wilson here and do a little jig – great value.

Jameson Williams might end up being one of the most polarizing prospects in this class when all is said and done. Williams is blazing fast. He was expected to run a sub 4.3 40 at the NFL combine. Unfortunately, he tore his ACL in the National Championship game, and he will no longer be able to participate. He is expected to make a full recovery. Combine that speed with his underrated route running, and you get one of the best separators in this class. His tape and his production are both excellent, but his detractors will point out his late breakout age and wonder why he could never earn meaningful playing time behind Garrett Wilson and Chris Olave at Ohio State. He had to transfer to get on the field. It will be interesting to see if he is still a first-round NFL draft pick after tearing his ACL. And if you pick him in your rookie drafts, you will have to wait a little while to see him on the field. But you’re also getting a high-end WR prospect with tremendous upside. I’m happy to snag that in the back half of the first round!

I’m a bit shocked that Drake London lasted this long, even with the fact that he suffered a fractured ankle earlier this year. While that ended his season, he was on pace to have one of the best WR years in college football. I’m not worried about the ankle injury, and neither should you be. He’s another player in the mold of DK Metcalf, huge catch radius, fast, and elite at jump balls. Seriously, even Sam Darnold couldn’t miss him. I heard that he’d be ready to go for pre-draft testing, which will only help him and raise his hype. Also, I know you might be wondering just how great he did in 8 games this year, with Slovis at QB, 88 catches for 1,084 yards, and 7 touchdowns. Yeah, I’m ecstatic getting him in the late first. Buy those late firsts, people.

Walker took things to another level transferring from Wake Forest to Michigan State in 2021. The Doak Walker winner (nations top running back) led all power five running backs in rushing yards (1636). Walker is a little smaller than Breece Hall and Isaiah Spiller at 5’10 210, but he packs a punch with a sturdy frame. According to Pro Football Focus, Walker forced more missed tackles than any other running back in the country this year (89). He’s one of the few running backs deserving of first-round rookie draft consideration.

Although I preferred to go QB with this pick, there was a great opportunity to draft the best player available. Chris Olave has some of the best hands in the draft and runs silky-smooth routes. Often overshadowed in a crowded WR room at OSU, Olave has the perfect game to succeed in the NFL.

I thought about perhaps going with Malik Willis out of Liberty, but I believe there are too many unknowns based on the strength of schedule that he faced. David Bell has been impressive ever since his freshman year at Purdue. It is difficult to live up to the Rondale Moore hype, but Bell has been able to shine as he was one of three finalists for the Biletnikoff Award this past season. He has great athleticism and long arms. His biggest weakness is the lack of speed down the field in a straight line. We will see how much this will hurt him at the combine, but I worry about his ability to burn corners in the NFL. He’s a few steps behind his old teammate Moore in that department. Regardless, he will be a solid WR with good hands for whichever team decides to pick him up.

Get ready for Round 2

Did the quarterbacks shake out as you thought? Did your QB1 go too low? Comment, and let’s discuss it. Are you team WR or team RB? Was Burks a steal at 1.06?