The Dynasty Nerds teams hits you with Round 1 of the Post Combine Superflex mock draft. 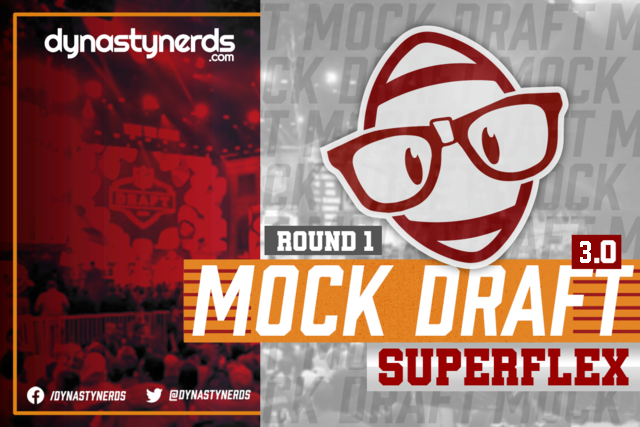 We left the Combine in the rearview mirror and headed toward the pro days. The first round of the 1QB mock is here. The quarterback class isn’t as strong as in years past. Will the quarterbacks still rise to the top in Superflex drafts?

Hall was my 1.01 in all formats prior to the draft and the combine only further reinforced that prior. Hall checked all of the boxes with testing and left no questions that he is RB1 in this draft class. We can look forward to Breece landing a bellcow role with day two draft capital. He will be a plug and play top 15 running back for your dynasty fantasy football team for many years to come.

It was no stretch to have Wilson above Burks even before the combine. But after seeing how well Wilson tested and how poorly Burks performed in his drills, you’re more than likely going to start seeing a lot more of it. Wilson’s reliable hands, unique understanding of leveraging defenders, and top-of-the-class athleticism are more than likely going to gift him the highest draft capital of this WR group. Sign me up on the WIlson train. Even in SF formats, I’m going to take this stud over any of these long shot QBs.

Malik at 1.03?! What you talking about, Willis? Well, before you cast aspersions on the selection, consider that the athletic Liberty quarterback has thus far delivered on every pre-draft trial set before him. He impressed at the Senior Bowl, scrambling his way through the premier all-star classic whilst registering the top passing velocity amongst rostered quarterbacks. More recently, he dazzled at the Combine with some spectacular throws during the on-field evaluation period. With a Wonderlic score of 32, Willis proved that he has the intelligence to match his physical tools. And, in perhaps his most endearing test, his character stood out while making a private philanthropic gesture on the streets of Indianapolis. In a superflex format, I am quite pleased to secure this ascending signal caller.

I will take Spiller at 1.04 no hesitation! Don’t let recency bias fool you, just because he didn’t run the 40 at the NFL combine does not mean this man isn’t the best RB in the draft. Over 1100 all purpose yards in 3 straight seasons. 7+ touchdowns each season, while still splitting carries with other backs. Oh and did I mention he has been doing this in the best conference in college football against NFL caliber prospects year after year! Plus he has been doing this while never eclipsing 188 carries in a season. Fresh legs, major talent, and proven production! Sign me up.

Treylon Burks is still my WR1 in this class despite a underwhelming, albeit above average, NFL Scouting Combine performance. Burks’ logged a 6.32 Relative Athletic Score in Indy, which was propped up by a great size grade. He has the frame of a traditional prototype at the position with enough athleticism to be an instant mismatch for defenses. The rumors of a sub-4.4 40 yard dash time did not come to fruition but his 4.55 at 225 lbs is still moving, especially when you consider his style of play. His body control and jump ball ability are a sight to behold. With elite size, impressive game speed, and excellent ball skills, Burks is a safe fantasy bet.

In any other year, there is no way I continue to only let 1 QB get taken in the top 6 of a Superflex draft, but I am just not sold on this group of QBs. Ultimately, I may have taken one here if it wasn’t for London being available, who is my WR1 of a very stacked class. London has size, strength, and the ability to separate from the defender right at the point of the catch, making him a potentially elite red zone threat and contested catch target. He reminds me a lot of Mike Evans or prime Hakeem Nicks. I think no matter the situation he goes to, he will be a WR that his QB is willing to throw the ball up to due to his big frame and the trust he can instill by winning contested balls. While London’s measurables are still to be seen at his Pro Day (he did not participate in the combine) I am still very much willing to take him here in a Superflex draft.

But his hand Size? Come on. He threw the best ball out of any QB. There is a no chance that there is a better SF choice for this. Pickett has been in Pittsburgh for four years. And he will likely end up in the best situation of any QB because he is the most ready to start day 1. Willis may have the upside but Pickett has the guarenteed production from the start. He is a plug and play player and if he ends up with a team like Pittsburgh, look out.

I have a suspicion that after being out of sight, out of mind at the combine I probably could have gotten Jameson Williams later in this exercise. But he is the best player available in my opinion, so I will gladly take him. I still expect him to get great NFL draft capital. I’m sure that had he been healthy enough to test at the combine, he would have dropped some jaws. He has game-breaking speed and is an elite separator. I’m personally not concerned about his BMI and I am happy to wait out his ACL injury for the upside that he presents on my fantasy team.

One of my true combine winners, Kenneth Walker cemented himself as a top prospect in the class. With the top two QBs and WRs off the board I’m going to zig and take my last elite RB prospect. Walker is shifty and runs with power and speed. I expect him to be a day 2 prospect and an immediate starter for your dynasty squads.

Truth be told, I’ve never been a big fan of Corral. He’s now my QB3 in this class behind Pickett and the ascendant Willis. However, if you told me I’d be able to get Corral at 1.10? Sign me up. He’s a likely top ten pick in the NFL draft, and if that happens, there’s no way you’re getting him this late in the first round. When the dust settles, I think we’re going to see most Superflex mocks with some combination of Willis-Pickett-Corral in the first three picks. Imagine Corral lands in Carolina at the sixth pick or Denver at pick nine? And I get him here at 1.10 in Superflex? Value, value, value.

Olave is so much more than just a deep speed guy. Yes, he ran a 4.38 40 but that’s besides the point. Additionally, ignoring that he went to WRU Ohio State, Olave has proved himself time and time again. This past season, he caught 65 passses for 936 yards while showing his route running, speed, and strong hands. To get a fast route-runner this late in the first showcases how deep this draft is. Olave has the potential to be a stud and that’s all I could ask for at this point.

Jahan Dotson already has the polish of an pro WR. He’s on the smaller size but plenty fast (4.43) and a technician with smooth routes and flawless hands. He gets dinged a little in some analytical models for his late-declare status and later breakout but he looks plenty good in mine, landing right around guys like Tee Higgins and Drake London. He;s a steal at this point in the draft and should be an immediate contributor in the NFL and for your dynasty squad.

That closes out Round 1 of the post Combine Superflex Mock draft. The quarterbacks are not stacked at the top, and just three went in the first round. Draft capital and opportunity will be key for this quarterback class. Keep your eyes peeled for the second round of the 1QB and Superflex mock drafts coming soon.