@DarthDbacks takes a look at WR Ty Fryfogle and what his chances are in the NFL Draft and in your dynasty rookie draft? Find out more! 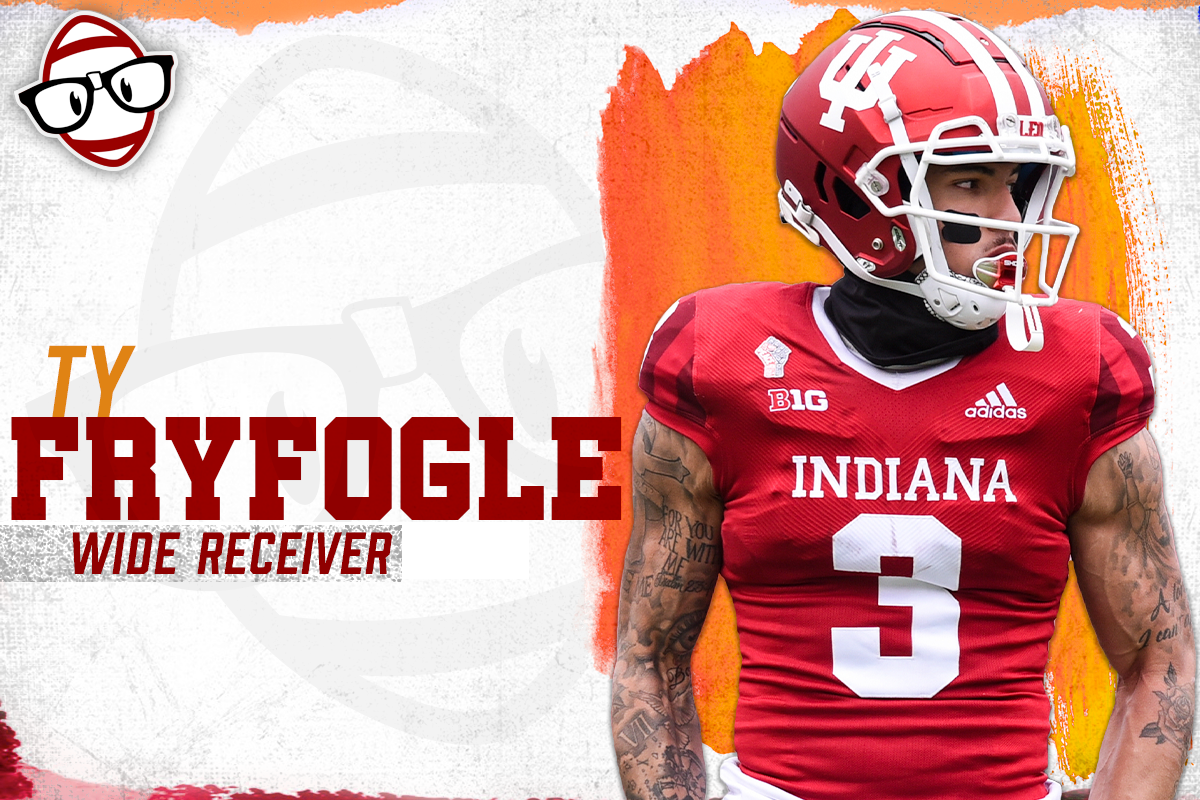 For my latest in the Dynasty Nerds rookie profile series, I’m covering the wide receiver out of Indiana, Ty Fryfogle. He’s a good WR with jump ball skills and excellent special teams ability. I expect him to get drafted in the NFL, most likely in the 6th-7th round. The senior wideout has excellent size and weight though he was lackluster at the combine with a 4.53 40 and a decent 39 vert.

He has a rough breakout age as well, 21.6. Although Fryfogle has good size/speed, he often loses focus and concentration. In the NFL, he will need tough coaching to ensure he maintains focus and motivates him to perform. On the other hand, Fryfogle can be an excellent deep threat that knows how to box out opposing corners and/or perform jump ball catches.

Fryfogle must learn how to block better if he wants to stay out on the field. He needs to understand medium to short routes so that he isn’t just a “run straight and deep” player. Regardless, Ty has decent potential if an NFL coach can coax that 2020 version out of him consistently.

In the play above, we see Fryfogle make a catch using his boxing-out ability. He turns his back to the cornerback, ensuring the corner can’t get in front of him. Ty catches the ball in front of himself to prevent the DB from swiping at the ball. It’s an excellent example of his ability to box out defenders and make a decent deep catch.

Although Fryfogle is only 6’1″, he can undoubtedly jump. Here he shows his ability to rise up in the air and make a good catch while maintaining his momentum and speed. He obtains separation from the defender and focuses on the catch, ensuring he has it. Obviously, Fryfogle can play, just has to focus more. Plus, it’s nice to see him be able to hold onto that high ball.

Looking at the first play, we see Fryfogle make a good diving catch ahead of the defender. He makes a strong back-shoulder catch. Plus, it shows he can make a variety of catches. As I said before, he has a tremendous leaping ability. Looking at the second play above, we see Fryfogle making an excellent jump-ball catch and using his strong hands to finish the catch. He concentrated, and good things happened. He shows good route running as well to box out the defender.

In my opinion, I don’t see a reason for Ty Fryfogle to truly be rostered in dynasty unless you have crazy deep leagues or a large taxi. I wouldn’t draft him before the fourth round in dynasty rookie drafts. Although he has good ability, I don’t see him getting drafted high enough to truly ever breakout. Of course, this can change, but he will have to work very hard to make it happen. As for his role, I’d say his career ultimately winds up as a late WR5/6 with occasional flash plays.

Do you want to become the best dynasty player you can be? Be sure to use my promo code “MAYTHEFORCEBEWITHYOU” for 15% OFF your subscription to Dynasty Nerds! It makes it only three dollars or so! Give me a follow on Twitter @DarthDbacks. I love to talk football, baseball, movies, shows, Star Wars, Marvel, and interact with the fantasy football community. For more articles of mine, click here.