With the meteoric rise of QB Carson Strong, his top weapon – TE Cole Turner – has enjoyed a rise in his draft stock. See where he stands in this class and how he can be successful in the NFL. 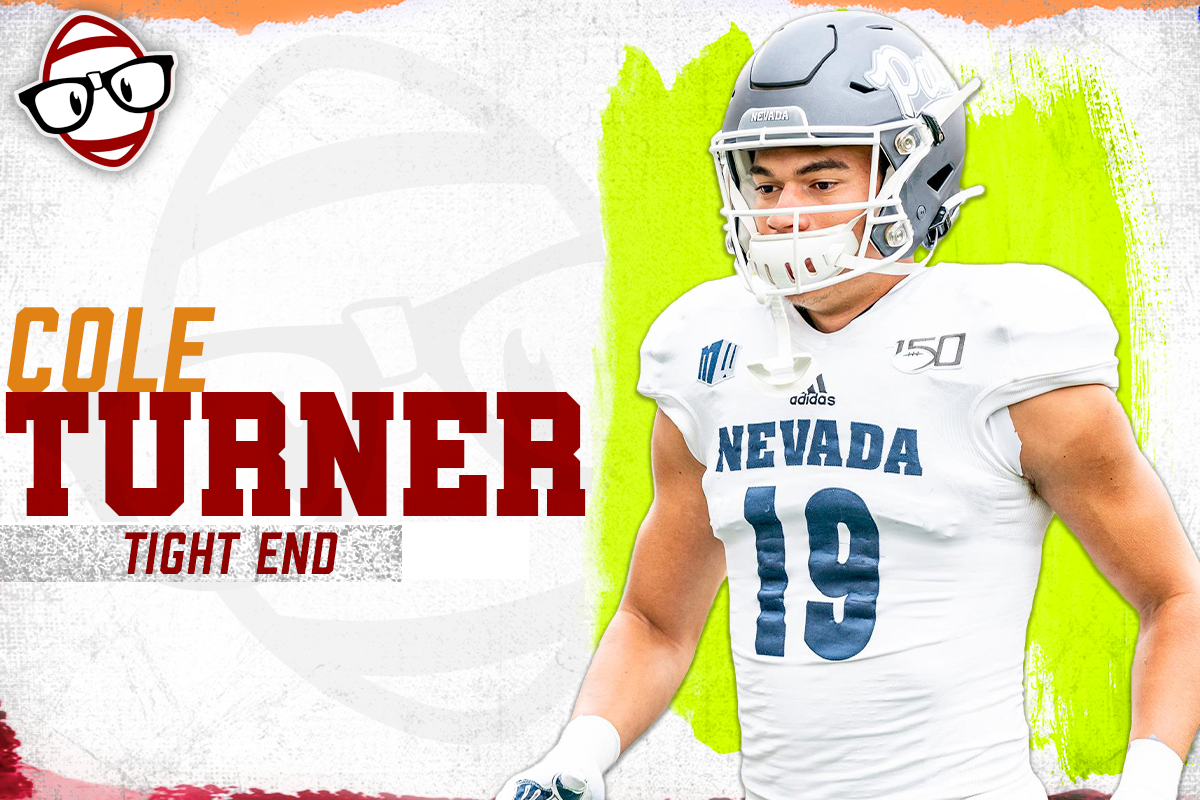 This year’s tight end class doesn’t have a significant headliner like last year’s with Kyle Pitts. It does have depth, and one of the top players in this deep pool is Cole Turner.

That is in no way a comp either for Turner; what it means is that when it is all said and done, he could be the leader of this TE class. He will be down in Mobile, Alabama, for the Senior Bowl. Mobile has proven to be a place where guys with his skill set can improve their draft stock. With the right landing spot, he has a real chance to make an impact on day one for a team next season.

Cole Turner attended Clackamas High School in Oregon and played well enough to earn a three-star recruiting rating from 247 Sports. He received offers from Oregon State, Idaho, and even Columbia, but he ultimately went to Nevada and built a great relationship with a quarterback we all know in Carson Strong.

Turner played in 45 games during his four-year career, but it wasn’t until his junior year that he truly emerged. He had a combined 88 yards and just one touchdown in his first two years. In his junior year, however, he wasted no time. His junior year would see both him and Carson Strong build a strong relationship. His stats accumulated to 49 receptions, 605 yards, and nine touchdowns. This year of production would earn him first-team All-Mountain West honors

The program at Nevada and Turner would see their most success during his senior year. The team would earn a bowl bid as a group, and he would earn repeat All-Mountain West honors, but this time second team. He would eclipse the 600-yard mark again, and in his final year, he would hit double-digit touchdowns with ten. As mentioned above, Turner has caught the eyes of the NFL for a good reason. He is arguably the biggest name in the TE group for the Senior Bowl. By the end of it all, he may have that statement as non-debatable.

He has a knack for finding space in both the middle of the field and outside the hashes, as seen above, and it’s those instincts that made him a favorite of Strong. We see how Kelce and Pitts are being used in the NFL. I honestly think Turner could be used similarly for any team.

If you are going to be hyped up as a receiving tight end, you need a strong set of hands. Turner has that and then some. He can make easy, hard, and contested catches – those traits will earn his QB’s trust sooner rather than later.

Another area he has shown strong hands is when in the red zone. Hands don’t just include catching but also how well you block. Turner’s blocking on run plays, specifically in the red zone, is good, not great, but his hands are always in the right place and thus free of penalties. Easy to coach proper blocking technique, but again this will give him a leg up on other rookies coming in, which will earn him reps.

The single biggest area Turner has to improve upon is simple. It is his route running. He is so raw as a route runner that I can hear Gordon Ramsey yelling about it from here. Despite his route running being raw, his instincts are crisp as hell. If paired with better route running, those instincts could have Turner quickly become one of the better tight ends in the leagues.

Until the route running is cleaned up, he remains a big question mark regarding longevity with the coaching staff.

Early expectations can be the same for Turner as they are for most rookie TEs, not much, if we are honest. The true value lies in being patient and seeing him get better as the year progresses; it will be a process. If he lands on an offensive-friendly team, the sky could be the limit early and often. Most likely, though, the coaching staff will look at the route running and make him come along slowly, but at that point, he will be worth waiting on.