Trade deadline over? There’s still time to prep your roster for the offseason. @CoachKochman takes you through players to add before rosters lock. 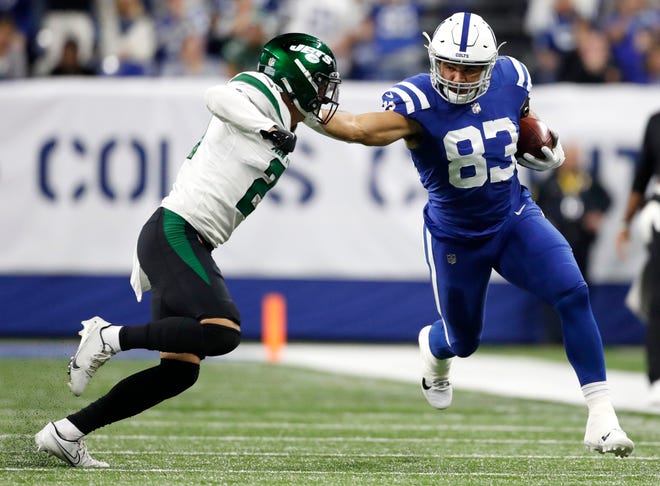 Most teams do not win their fantasy football championship. It’s a hard truth, but in dynasty, the smartest teams will take advantage of whatever their situation may be. For non-contenders, the coming weeks are the last opportunities to grab free agents before rosters lock for the offseason. Now is the time to cut the bottom of the roster players and veterans for a failed playoff push and get younger before supplemental drafts. Here are some dynasty speculative adds at each position to round out your roster.

It feels like ages ago that Gardner Minshew was the hot name when he took over for Nick Foles as the Jacksonville Jaguars quarterback. Only two years later, Minshew Mania is hanging on by a thread in Philadelphia.

Minshew completed 80% of his passes for 242 yards and a pair of touchdowns against the New York Jets in his only start of the season. The Eagles traded away a 2022 conditional sixth-round pick to get a quarterback to back up Jalen Hurts back in August. Hurts has been a strong fantasy player but struggled at times. The Eagles are 5-7 in Hurts starts this season while he has individually chipped in 13 passing touchdowns and 8 interceptions.

Minshew will only be 26 when next season starts and is with Philly through 2023. His passing stats are modest but in line with other starting quarterbacks. When applied to 2021, Minshew’s two seasons with the Jaguars put him inside the Top 24 in both QBR and passer rating. If the Eagles pivot away from Hurts at the helm, Minshew could possess QB2 value.

Only one running back on the Tampa Bay Buccaneers roster is under contract past this season. With Leonard Fournette, Ronald Jones, and Giovani Bernard all on expiring contracts, Ke’Shawn Vaughn has a shot at an increased role in 2022. It’s unlikely that all three other guys leave this offseason, but this might be the best moment to grab Vaughn.

A 2020 3rd round pick, Vaughn rushed for over 1,000 yards in each of his last two college seasons at Vanderbilt. Like Ronald Jones, Vaughn is used more on run plays than pass plays. If Jones were to find a new team in the offseason, Vaughn likely inherits that role. If Fournette or Jones were to depart, Vaughn would become a hot dynasty name.

Like Ke’Shawn Vaughn, Eno Benjamin is the only running back in Arizona under contract. He is tied to a potent offense with a rotating roster. Chase Edmonds is healthy, and James Conner will still get his touches in the coming weeks. Playoff contending rosters might drop a guy like Benjamin if they need room. While Benjamin is trending down, scoop him up.

Before Benjamin’s stock starts rising again, take advantage of an open roster spot or droppable player and buy into the hometown guy in Arizona.

The Seattle Seahawks are trending in the wrong direction. Pretty much every player drafted from Seattle has failed to exceed expectations in fantasy. The most unfortunate situation has been Chris Carson. The 27-year-old running back last played in Week 4 before a delayed announcement of his season being over. First, he fractured his hip in 2019, and now he needs disc fusion surgery on his neck.

If Carson either takes a step back or is unable to start the next year, the current heirs to the throne are Alex Collins and Rashaad Penny. Both of those guys are likely already owned in dynasty leagues and have contracts that expire at the end of this season. That leaves a pair of 23-year-olds to potentially see an increase: DeeJay Dallas and Travis Homer.

It’s probably time to reevaluate Laviska Shenault. His skillset was enough to tempt fantasy managers (myself included) into drafting him early in 2021. A new quarterback and ample opportunity for boatloads of targets was very intriguing. Then DJ Chark went down for the season, and Shenault’s value should have risen. Now, it appears there are a handful of players vying for a place in Trevor Lawrence’s offense.

Laquon Treadwell is the name that has reemerged most recently with at least four catches and 50+ yards in each of his last four games. But before he hit the scene, Jamal Agnew was the name from the middle of the season. Agnew is out for the year with a hip injury but at his peak (Weeks 6-10) saw at least five targets in each game.

Agnew is 26, which skews older for most speculative adds, but had a Top 36, Top 24, and Top 12 performance in 0.5 PPR scoring. As a cornerback in college, he just made the switch to wide receiver last year with Detroit. When Lawrence needed a go-to guy, Agnew stepped up. He is worth a grab for teams trying to fill out receiver depth but especially for teams with an open IR spot to stash Jamal Agnew.

Somehow, Tom Brady doesn’t look like he is slowing down. With another MVP-caliber season in the making, Tampa Bay’s pass-catching arsenal runs deep. So deep that we have hardly seen any of 4th round rookie wide receiver Jaelon Darden. With about 32% of targets on expiring contracts, Darden could see a big uptick next season.

Chris Godwin and Antonio Brown are both signed through the end of this season. Godwin just tore his ACL this week and could miss a significant chunk of 2022, depending on his recovery. Brown has missed most of this season due to injuries and suspension. Even if those guys stay in Tampa, the opportunity may still crop up for new wide receivers. Mike Evans is set to stay through 2024, so he has the top spot locked down.

It could be an offseason battle between Darden and 23-year-old Tyler Johnson for a regular starting spot. The edge, right now, goes to Johnson, who has appeared consistently throughout the season. Head coach Bruce Arians and Tom Brady both have a history of showing loyalty to guys who step up, and the opportunity may present itself to Darden.

Aaron Rodgers and the Green Bay Packers have smoothed over their summer turmoil for the time being. Another year in contention has been fruitful for Rodgers, Davante Adams, Aaron Jones, and AJ Dillon. The age-old question remains: who else should be rostered in the Green Bay offense?

Robert Tonyan was having a lackluster year before getting knocked out for the season in Week 8. Marquez Valdes-Scantling, Allen Lazard, and Randall Cobb have all had serviceable moments. One player who is likely on waivers in most dynasty leagues who does have a chance at an increase in value is Josiah Deguara.

Since Tonyan’s injury, Deguara has seen at least two targets in every game while splitting time with Marcedes Lewis. A 2020 3rd round pick and the third tight end off the board, Deguara’s appeal comes through the expiring contracts of Davante Adams, Robert Tonyan, Allen Lazard, and Marquez Valdes-Scantling. Assuming even two of those players leave, this young tight end might be a breakout candidate.

Another rookie to appear on this list, Kylen Granson, is a deep flyer for teams scouting out tight end youth. Currently third on the depth chart, Granson could leapfrog Mo Alie-Cox if Indianapolis doesn’t re-sign him after this year. Jack Doyle is done in 2023, so Granson could be a part of the Colts’ future.

There haven’t been too many, especially deep rookie tight end classes and 2021 didn’t look the part either. Kyle Pitts and Pat Freiermuth are the guys to roster from this year’s class, but after that, it drops off. The third-best rookie tight end in 0.5 PPR has been Tommy Tremble, who is only 22.8 points ahead of Granson on the season with almost three times as many snaps played.

Carson Wentz has thrown 7 of his 23 touchdowns to tight ends this season after having great rapport with Zach Ertz, Dallas Goedert, and Trey Burton in Philadelphia. Even if Granson only ends up being the second tight end in Indy next year, the fourth-round rookie may merit a roster spot for the offseason.