Continuing on to Round 2 The Dynasty Nerds team is here with Superflex Rookie Mock Draft 2.0. 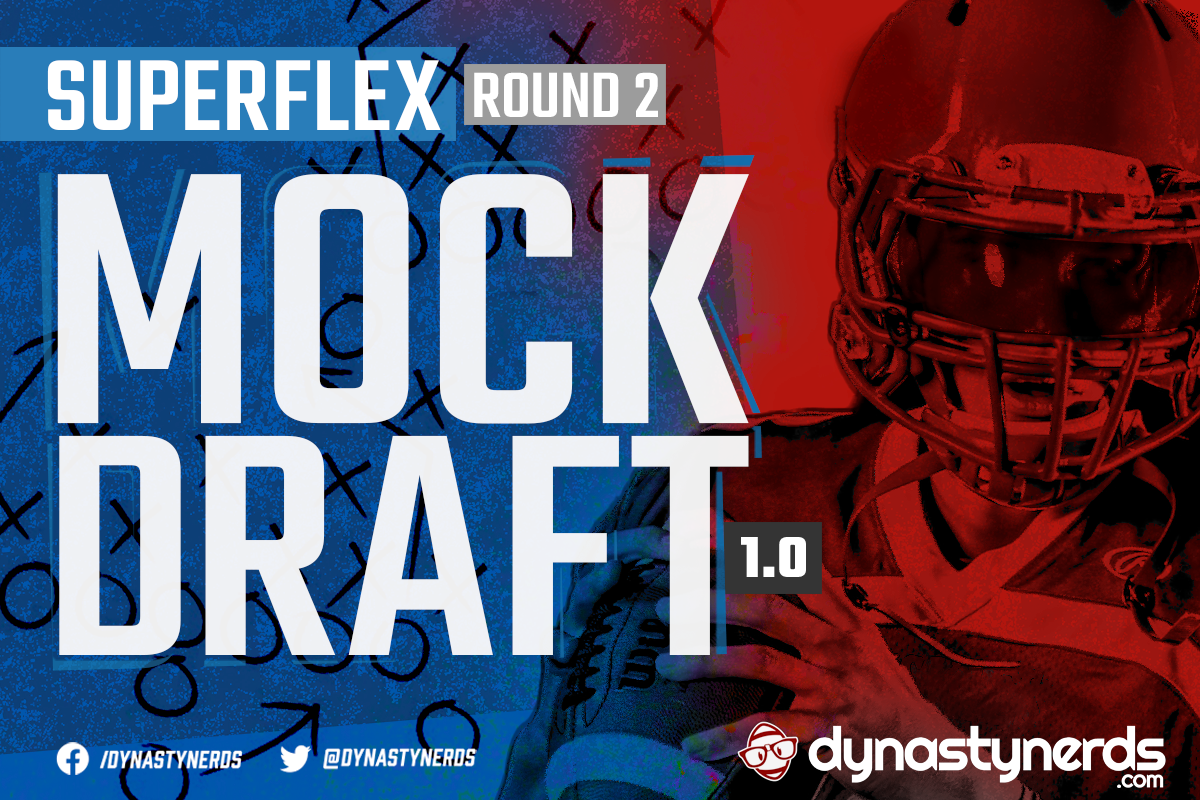 We are moving on to Round 2 of our Superflex Rookie Mock Draft 2.0. We saw quarterbacks drop out of Round 1 from version 1.0, showing a clear drop-off from the top two guys. Who are the tier-two guys? Where are they going in Round 2? Is there a consensus on who is in the second tier?

If this mock were occurring at the end of the last college football season, Boutte would be in the top-five discussion. However, a lackluster 2022 campaign has dropped him into the second round. Combine that with an injury hampered 2021 season, and some are doubting his viability at the next level. Many in the draft/scouting community still have him graded as a first-rounder in the NFL draft, which makes him a steal here. If he is drafted in the first round of the NFL draft, there is no way he will fall this far. – @DanT_NFL

The shine has faded somewhat on Hendon Hooker since the loss to Georgia. But the reality is that he’s going to post back-to-back years of elite production in the SEC, and he’s likely to be a Heisman finalist. He’s got great size, mobility, and arm talent. There’s a good chance he’s a first-round pick in April. If that’s the case, then getting him at 2.02 would be stealing. He’s an older prospect, which certainly impacts how he’s viewed in the devy community. We’ll see how much it impacts how NFL scouts view him. – @Devy2DynastyFR

Downs is a bit on the small side, but that doesn’t worry me. He’s performed excellently and would typically be a first-round talent if not for the insane amount of extremely talented running backs and wide receivers in this year’s draft. Downs is on his way to back-to-back 1,000+ yard seasons and has scored 19 touchdowns in that time. He’s a proven receiver that just needs good draft capital to be a steal here. – @DarthDbacks

I know Boston College has not been good this year, but even with bad quarterback play, Flowers has had his best year. He will reach 1000 yards receiving for the first year and continues to show what a playmaker he is. With the quick emergence of Jahan Dotson before injury, I think Flowers could raise up boards the same.- @hayeb3

Corum’s outlook is a little unclear, but I am willing to roll the dice on him with a mid-second. He doesn’t exactly profile as a complete back, and I wonder how the NFL will see him with his size. He is a very patient, decisive runner with a nose for the end zone and breakaway speed. Corum is a high-character guy and should crush interviews. Day 2 draft capital would be huge for his stock. – @FF_Hulsey

As I said in the first round, I usually go quarterback early in Superflex drafts. Levis allows me to take that quarterback shot after skipping it in the first. He has had top 5 hype during the draft process and has a bag of tools. In a good way, he reminds me of Jake Locker. You could do a lot worse with your second-round pick. – @ReflipeWThenuz

Unlikely to slip beyond the first round in the NFL Draft, I understand Mayer’s slip in this mock exercise. Not an overtly athletic player, but a uniquely capable two-way tight end, Mayer will be a coveted NFL Draft asset but may offer less fantasy appeal. Despite the lack of athleticism, Mayer is a competent chain mover but offers little after the catch. However, Mayers tremendous body control and size create a lethal red zone option. There is top-5 tight end upside if Mayer can land in a high-octane offense. – @DynastyOasis

At this point in the draft, I’m looking for high upside players with good college production. Mims fits the bill. Mims is a bit undersized, but shows strong route running, the ability to break press, great ball tracking, and even the ability to make contested catches. Nothing completely blows you away, but he doesn’t have many weak points in his tape. I’m excited to see where he ends up in the draft come April. – @timbmartens

If Kendre Miller declares for the 2023 NFL draft, this will be a STEAL come May. Getting a back that could arguably be the RB3 in this class at 2.09 in a Superflex draft was too good to pass up. Miller has been a workhorse for the Horned Frogs this year with 1260 rushing yards and 16 touchdowns. While teammate Quentin Johnston gets a lot of hype (deservedly so), remember the name Kendre Miller when it’s time to draft. – @noahrwright

Rome is one of my “dark horse” guys this year; I expect him to be a draft season riser, though he may return to school. He should break 1000 yards this weekend, and he has some nice traits: high-end speed (4.42?), solid body control, and excellent ball skills that let him adjust to and bring down even off-target throws. His route running is crisp, he creates separation, and he has some nice secondary metrics like a 2.45 AYPTP (second to only Hyatt amongst P5 juniors). – @ekballer

Despite being a Penn State fan myself, I feel I’ve always been lower than the consensus on Parker Washington compared to others in the devy and dynasty community. However, the late second round of a rookie draft feels like a great place to land a player who will likely be a Day 2 wide receiver. He is aggressive with the ball in the air and after the catch. He is a twitchy athlete who I believe will test well at the combine. – @TheSmingDynasty

“I am speed.” -Devon Achane, probably. On a less-than-exciting Texas A&M offense, Achane has been a bright spot, totaling 1,298 total yards and 11 total touchdowns. What he lacks in size, he makes up for in game-breaking speed and elusiveness. His college tape and production against SEC defenses give me confidence that Achane can make some noise during draft season. Devon Achane will be a name to watch come combine time and could be a great upside pick in the late second/early third round of your rookie drafts. – @FF_TJHernandez

That puts a bow on Round 2 of the Superflex Rookie Mock Draft 2.0. What pick surprised you? Who was a steal? Let us know what you think. You can find Round 1 HERE.