The son of Colts’ legend Marvin Harrison, the Ohio State WR is quickly rising up devy ranks and positioned to be the next great WR. 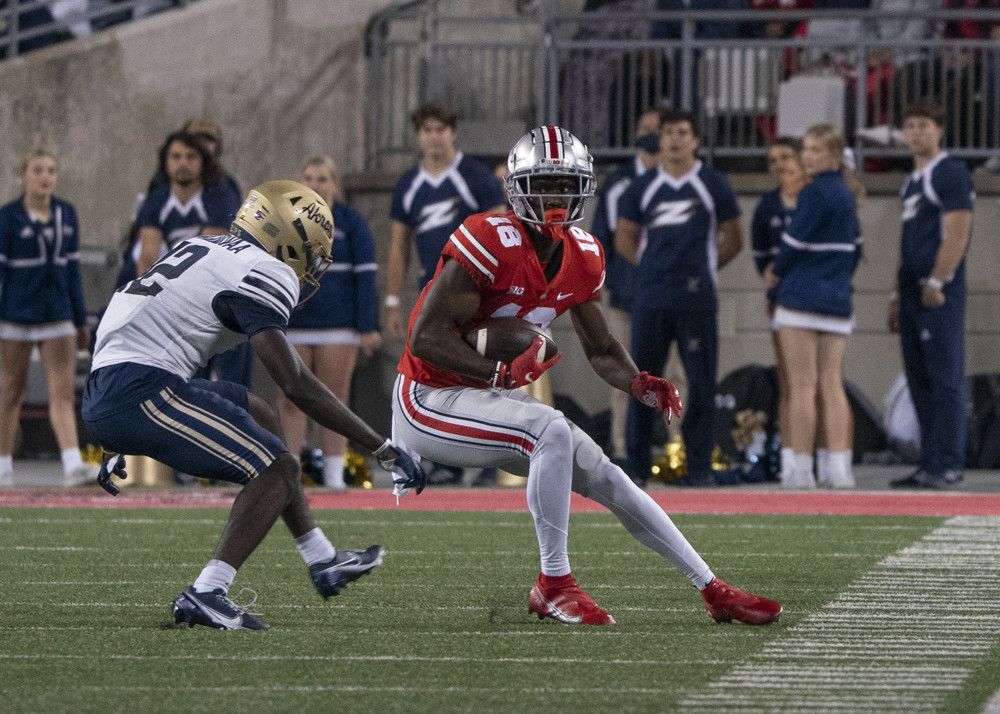 Marvin Harrison Sr. was one of my favorite players of all time, and watching him with Peyton Manning was an absolute treat. Harrison played with quiet confidence and wasn’t demonstrative. I always thought that is why he often flew under the radar when people discussed the best WR in the NFL. Harrison never showed off and ran off his mouth, no matter how good and dominant he was.

When I heard he had a son, I was ecstatic. Any son of the great Marvin Harrison would be intelligent and have excellent great bloodlines. Junior is all of that and more. He plays with the same confidence as his father, but their games are different. Harrison Jr. is brilliant, and his grasp of the technical side of the game is incredibly advanced. And it’s not surprising to anyone who watched the elder Harrison play.

Harrison Jr. played his high school ball at St. Joseph’s Prep in Philadelphia, Pennsylvania. He was a high four-star recruit, the 97th ranked player overall in the 247Sports Composite for the class of 2021. Harrison received eighteen offers, including offers from Michigan, Arkansas, and Penn State. He was unable to take any official visits due to Covid and decided to attend Ohio State and further feed the legend of WR coach Brian Hartline.

Ohio State was playing with three NFL WRs in the starting spots, but Harrison found the field in limited duty. He caught 11 balls for 139 yards and three TDs as a freshman. He will start 2022 as the WR2 for the Buckeyes, playing opposite of the 2023 Draft’s potential WR1, Jaxon Smith-Njigba.

Owns the Line of Scrimmage

Harrison’s most advanced trait is how he works at the line of scrimmage. It’s an area in which many college WRs struggle or, at least, can still succeed despite not being as nuanced. Harrison makes a quick juke in the play below and gains outside separation. All in a concise area, and it should have been a much easier catch, it is thrown behind, but he makes it look easy.

Marvin Harrison Jr. is about to step into a lot more production in 2022.

Here, he makes a quick move inside to get the DB moving, and then Harrison takes off and has separation to the end zone.

Marvin Harrison Jr is going to smash this season in the Buckeye offense!

Will be the 2nd WR behind JSN this season, then take that lead role when JSN moves to the NFL after 2022. #C2C pic.twitter.com/3TTnrtxbwv

He possesses an array of moves and knows how to set up DBs. Harrison has quick hips and strong hands when engaged; he isn’t fazed when jammed. I love watching him work off the line.

Beyond the initial moves, Harrison is adept at working downfield and when the ball is in the air. He maintains his position, so the ball stays away from his defender, using his body to shield it. His tracking, while the ball is in the air, is elite. The play below is during drills last fall, but I love the advanced technique from Harrison.

Harrison has excellent hands, and his understanding of positioning makes some tough catches look easy. It’s part of what makes him so dangerous. He’s got some serious hops too!

Coming out of high school, 247Sports’ profile of Harrison highlighted a few areas which needed work – strength off the line and blocking. He has addressed strength in the off-season, adding nearly 20 pounds of solid muscle. Any weakness Harrison has, I am confident he will address.

With more game reps and tape in college, more areas of concern will arise, but I currently have no glaring weaknesses in his game. He’s not an elite athlete, he doesn’t have top-end speed, but it doesn’t affect Harrison’s overall game much.

Right now, the price for Harrison is as low as it will be unless he has a severe injury and misses time. The Ohio State offense will score boatloads of points, and Harrison, behind JSN, will see a mess of targets. And then he will be “the man” when JSN takes off to the NFL.

After this season, Harrison is positioned to be the WR1 in Devy and C2C. He’s already my WR3, behind Kayshon Boutte and JSN. I would be aggressively trying to acquire Harrison now if you are building. He’s got the potential to be an early 2024 Draft pick and be a top WR in the NFL for many years.